As noted in our earlier post (about diabetic soft drinks), when you add the name of a disease to your product, it’s not always clear what your product is claiming to do. By including the word “diabetic” in the name you give your product a semantic ambiguity. Is it a product for diabetics? Is the product, itself, diabetic? Or is it a cure for diabetes?

This ad for “G.B. Diabetes Whisky” was published in a 1900 issue of The Lancet

In what sense can whisky be diabetic, then?

I do not know; it is merely a name … the “British Medical Journal” should not have accepted that advertisement … as there is no sugar in whisky, the word diabetic cannot mean that the sugar is reduced.

from testimony given before the Select Committee on Patent Medicines,
House of Commons, 1913

I recently learned about two kinds of “diabetic” whisky that share this same kind of semantic ambiguity. 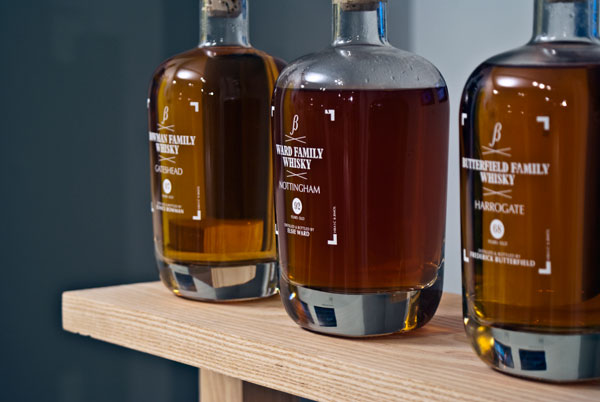 In 2010, James Gilpin made a series of personalized, single malt whiskies from the sugar-laden urine of hyperglycemic diabetics. His process?

First, he collected urine from type-2 diabetics. Then he used these samples as an ingredient in his whisky series. He labeled each bottle with the patient’s last name. And then exhibited the diabetic whiskies as conceptual art (along with his distilling apparatus) and held tastings for public consumption.

As a diabetic himself, Gilpin also confirms that he was not trying to make a “functional” or “special purpose” whisky for diabetics.

… it’s not a product intended to be consumed by diabetics, only produced by them.

Now a partner at Made By Us (Commissioned by You), this early 2010 project might be his most well-known.

By conflating urine with beverage, Gilpin tapped into our fascination for disgusting foods. Made all the more foul, for the unhealthiness of the urine. (See also: Andrew Zimmern, Virgin Boy Eggs, and u Rain Bottle) 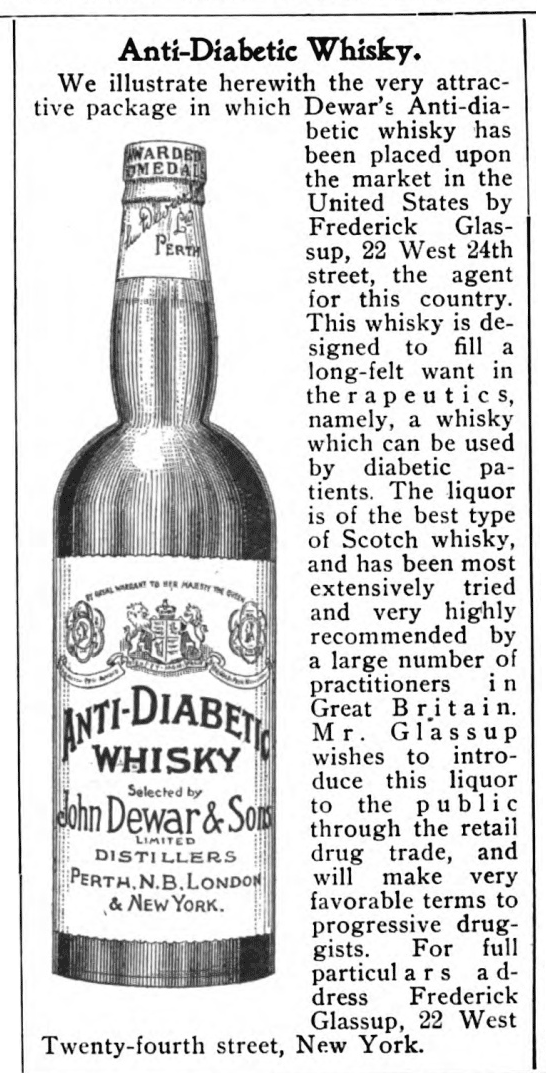 I found this product announcement in an 1898 issue of American Druggist and Pharmaceutical Record. I have a subscription, of course. (Although I wonder how many other diabetics still subscribe.)

I love that the publication is touting “…the very attractive package.”

Seriously though, when you conjoin your product name with the name of a disease, it good to really clear about which side your on. You’re either pro-diabetic or you’re anti-diabetic.

The problem is, while John Dewar & Sons may have intended this as a low-carb option for diabetic drinkers, it does sound as if it might be a cure. As if Dewar’s had distilled some very smooth and drinkable diabetic vaccine.

Similar to George Back & Co. and their advertising for G.B. Diabetes Whisky, Dewar’s advertised their anti-diabetic product in medical and pharmecuetical periodicals. And, as with Loeb’s Diabetic Foods, these ads sometimes appeared right alongside of more serious diabetic gear like syringes. 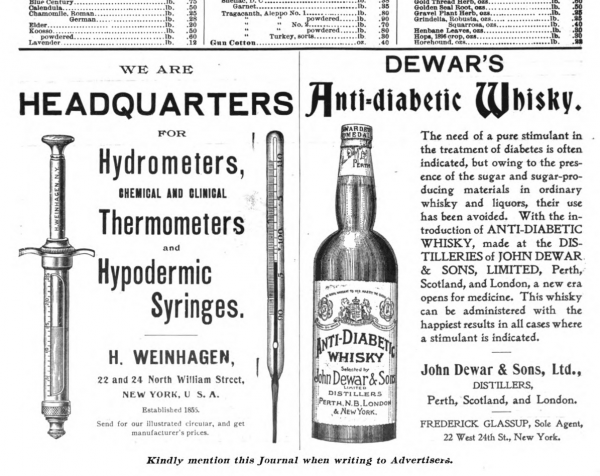 In this case, however, it must just be a coincidence that an ad for syringes appears alongside of a Dewar’s Anti-Diabetic Whisky ad. In 1898, diabetics were not using “hypodermic syringes,” since insulin wouldn’t be discovered until the 1920s.