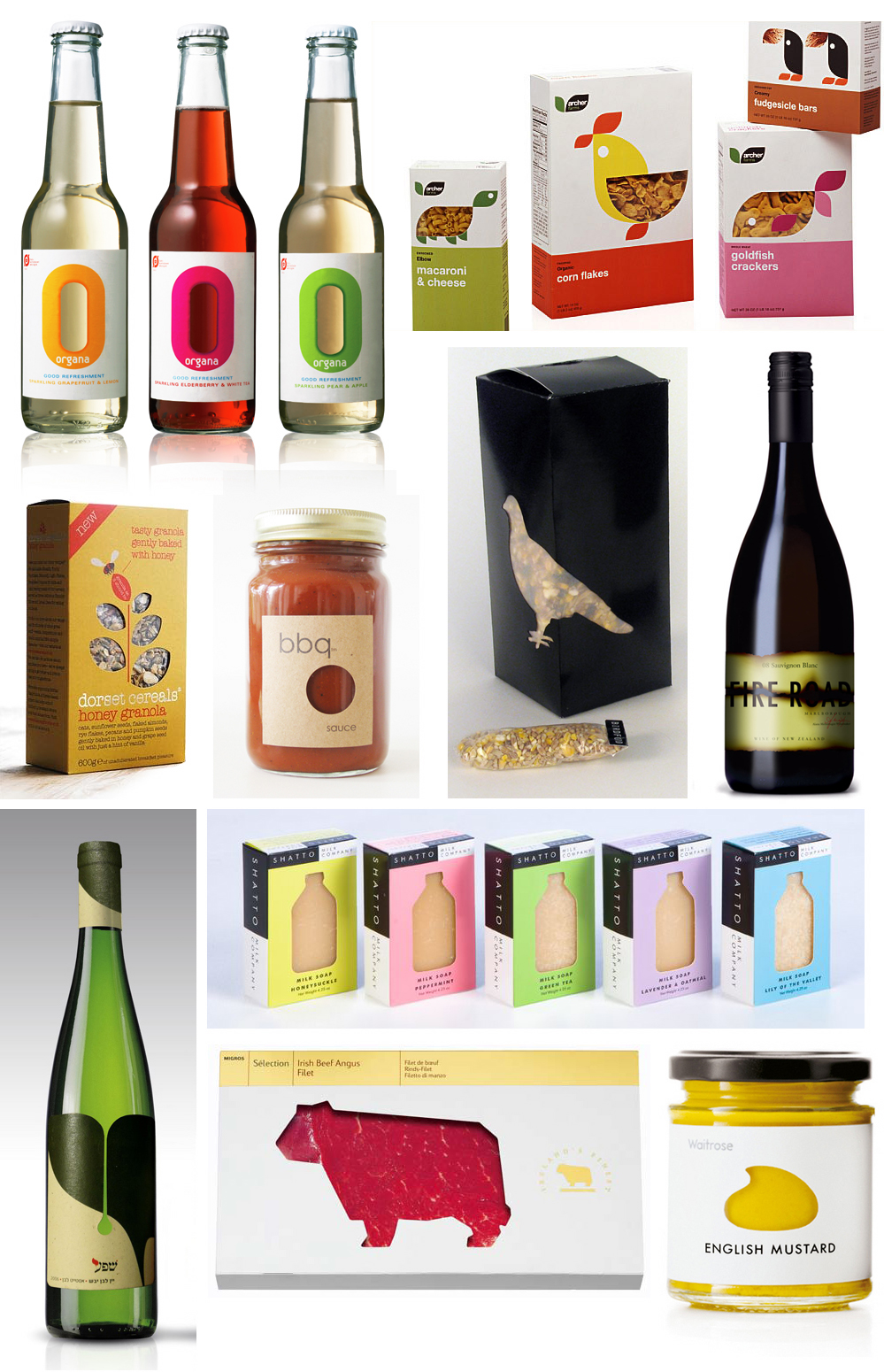 Top left: the open “O” in Organa’s label (designed by Copenhagen-based Rosenstand & Co.) works as a portal showing the product contained, and because of the darkening color at the edge of the window—looks as if the edges of the label were being somehow moistened by their proximity to the beverage; top right: Templin Brink’s redesign for Target store’s Archer Farms packaging uses die cut shaped windows —each one incorporating a view inside the box into an illustration of an animal on the outside. (Using the contents to make a kind of collage.); 2nd row left: London-based Big Fish’s design for Dorset Cereals used die cut grain shapes providing multiple windows into every box; to the right: BBQ sauce by the We Love Jam company uses a simple circular hole as a meaningful (if not actually necessary) peephole (via the Dieline); to the right: Azul Amuchastegui Bari’s concept for a birdseed box package that uses a bird-shaped die cut window to reveal contents and amount the remaining during use. (via Sylvain Allard’s Packaging | UQAM blog); Fire Road Wine (MM tells us this was designed by The Creative Method) uses a similar trick to the Organa label: ink color at the edges make it it seem as if this label’s appearance is the result of natural forces—in this case fire; bottom left: Israel-based Nine99Design’s die cut wine label uses a drip-shaped window through which you see actual wine (or not, if the bottle is empty); to the upper right: (via the Dieline) Sullivan Higdon & Sink’s design for Shatto Milk Company’s “Milk Soap” uses die cut windows to allude to milk bottles, signaling the product’s key ingredient; bottom, center: Migros meat package (by Külling Identity AG) uses a steer shaped die cut window to say “beef”; bottom right: Waitrose mustard labels (by Lewis Moberly) also speak about the contents of the jar with its dollop-shaped window.

Although some deceptive souls will use packaging to conceal the true nature of a product—a great deal of packaging shows that a lot of ingenuity and effort goes into actually revealing the product contents.

Plenty of boxes have die cut windows in various functional and abstract shapes. But I particularly like it when a label or a box reveals a portion of its content in a meaningful way. The shape of the opening, while technically a “negative space” where something has been removed is really an opportunity to say something positive about the contents of the package.

Some current examples above. Some vintage examples below.

With one exception (where noted) all of the above photos are from Dan Goodsell’s astonishingly useful online archive of vintage commercial ephemera: The Imaginary World. Top left: Rocket-shaped window for Brach’s Candy; top right: a dressmaker’s-dummy-shaped window for Trimtex Rayon Rick Rack (from Janet McCaffrey’s Primrose Design blog) 2nd & 3rd rows, left: 2 catastrophic, heat-related windows for “red hot” type candies; 4th row, left: Hopalong Cassidy uses a lariat/lasso to create a window into his licensed drinking straw package; to the right: a house-shaped Halloween-theme box for cellophane bags uses a square window-shaped window— (pretty much bringing the metaphor full circle); 5th row left & center: boy and girl Crystal Sugar Spec boxes, each appear to use a pair of die cut cellophane eyeglass-shaped windows, through which one views the candy sprinkles inside; to the right NuFizz instant soda pop package uses bottle shaped die cuts to reveal foil packets—using the package usually associated with soda in those day to signal a soda that doesn’t come in a bottle (its smaller-carbon-footprint was, perhaps, ahead of its time); bottom left: the box for Pactra’s water color set evokes Tom Sawyer, circa 1950s with its window through wooden fencing; Pearson’s 80 Spooky Stix box uses a die cut window that serves as a view both into the pirate’s treasure chest illustration as well as into the actual box—the same contents for both. (Now, empty.) 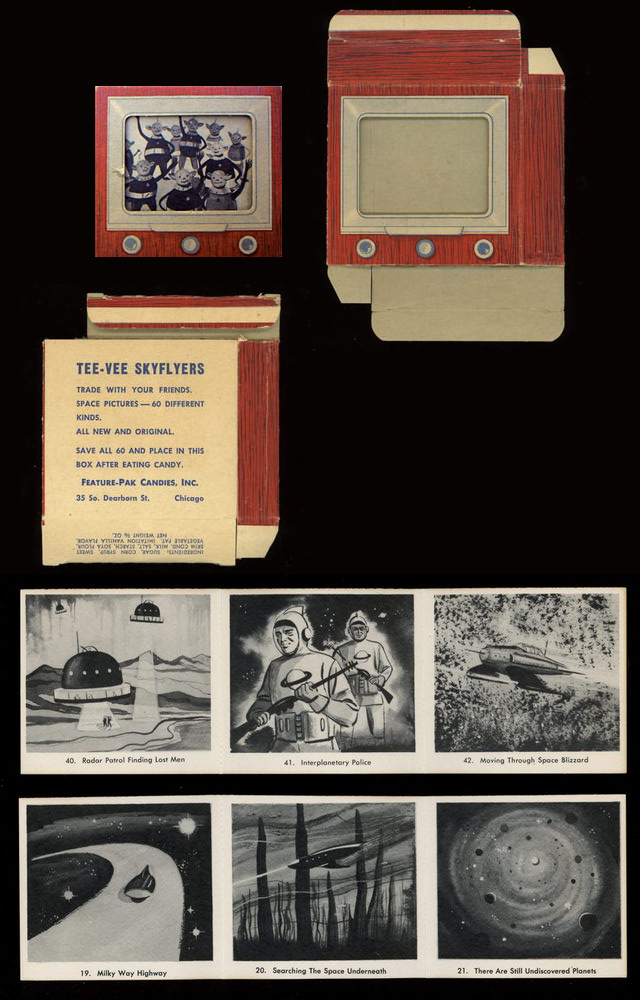 Upper left image from The Imaginary World site; the rest are from Vintage Non-Sports Cards Chat Board

Tee-Vee Skyflyers were an interesting case. Here the die cut window was a TV screen and the small candy box was a TV console. And through this window one viewed not the candy—which seems to have been kind of incidental in this case—but a black & white outer-space illustration. A series of collectible cards, simulating the experience of watching science fiction on a black & white television.

One final point: the idea of seeing the product through a window in the package is compelling enough that it’s sometimes merely simulated. 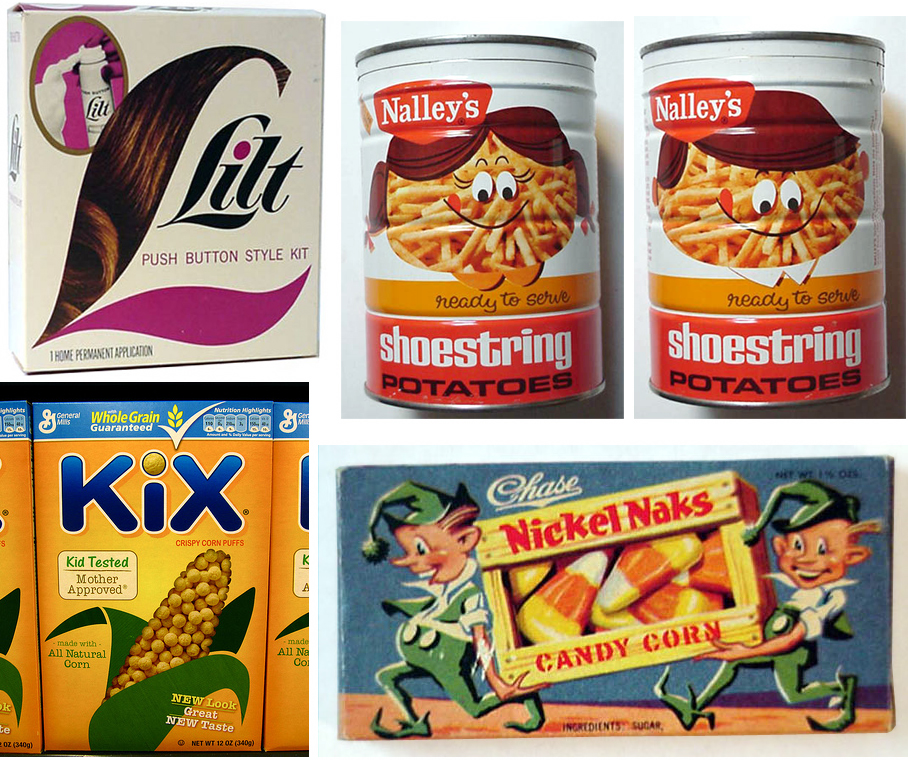 Photo of Kix boxes with faux die cut windows is from Cabel’s Flickr Photostream; the other photos are from The Imaginary World

The Lilt box above does not contain a wig or a hair extension, but the simulated die cut window reveals the Lilt brand promise: an awesome perm. The shoestring potatoes cans superimpose the simulated product contents onto the faces of a boy and a girl—(a collage effect similar to the more recent Archer Farms animal illustrations.) Kix superimposes a photo of their Crispy Corn Puffs onto a faux die cut window in the shape of an ear of corn—equating their corn cereal with kernels of corn. And then we come to the candy corn. The cross-referential Nickel Naks box features an elf-borne crate and an illustration of the product is featured through a faux window in the crate.