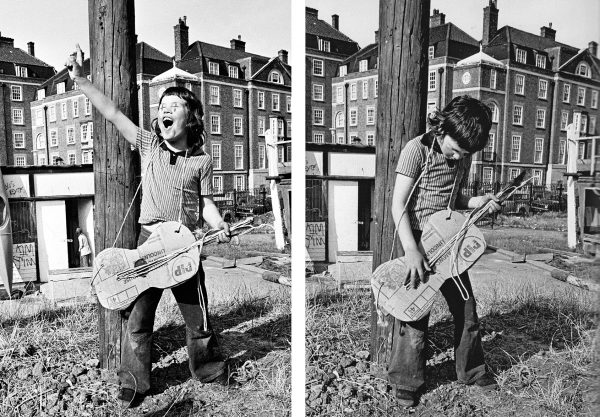 I’ve written several times here about Mick Rock’s wonderful photo (above left) of the boy with the cardboard guitar from 1972. Originally earmarked as the album cover for the Bowie-produced Mott the Hoople album, All the Young Dudes, but then set aside in favor of the 1917 illustration that we discussed last week.

I recently had an opportunity to ask the boy himself—Tony Campbell, now 51—what he remembers about that day. He remembers the day Mick Rock took his picture. But surprisingly, up until about a month ago, he had never seen the photo.

Cardboard Guitar at the Adventure Playground

Randy Ludacer: I’ve read that the location of the photo was a kids “play centre” which might have been one of those UK “adventure playgrounds” that sprang up in the 1960s. How did you come to be modeling for Mr. Rock at that particular time and place?

Tony Campbell: It was an adventure playground on Regent’s Park Estate, I use to play there…. My dad, aunt, uncle and cousins lived there. That day there was a festival going on. I was just playing around and who I now know to be Mick Rock, asks if he could take some pictures. I can’t remember where the guitar came from but it wasn’t me [who made it] and unfortunately I can’t remember who applied the makeup.

RL: I hear that, in the photo, you had been asked to sing a song. What song was that?

TC: I do remember the song I sang and it was….. Dream by the Everly Brothers.

RL: When did you start learning to play (non-cardboard) guitar? What bands did you like growing up? Were you in some bands of your own?

TC: At that time I liked T-Rex. (my cousins named their dog Rex)… I grew up loving music… loved Led Zeppelin, Pink Floyd, The Clash and The Jam…. I do play guitar but not good enough to be in a band :-(

RL: I’m guessing that the idea of using a photo of you as the cover for Mott the Hoople’s album came afterwards. I was wondering when you learned that it had been originally slated for the cover. Years later? I’ve always sort of disliked the illustration that they went with instead. How do you feel about it?

TC: I remember at the time something being mentioned about Mott the Hoople, but only discovered the photo last month. I think they should have stayed with my picture;-)!!! 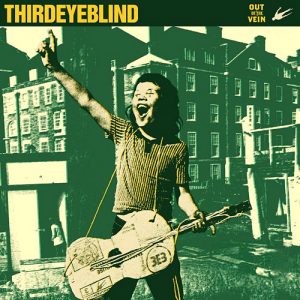 RL: Did you know that the photo was eventually used as an album cover in 2003? [on right]

TC: Thank you for pointing out that the dude photo was used for the Third Eye Blind album!! I wasn’t aware.

RL: I heard an unpublished telephone interview with M. Rock where he talked a little bit about the Dude ’72 photo. He mentions another boy with you that day — “a black pal” who he says he also photographed with the cardboard guitar. I wonder if it could have been him who made the guitar?

TC: I’m not sure whether my friend made the guitar. But what’s funny is him and his twin brother were nicknamed “Randy 1” and “Randy 2.” I lost contact years ago.

TC: I had many jobs: selling flowers, lift engineer mate, van driver and many more. I went back to education about ten years ago and I became a qualified drink and drug worker… I’m a bus driver at the moment and it’s OK!! I only work early shifts and no Sundays. I’m lucky!!

RL: Right around the same time that I found out about you being Dude ’72, I also learned that the illustration that they used on the Mott-the-Hoople cover (instead of your photo) was a reprint of a clothing ad from 1917. So I’m writing one post about the old magazine ad that they copied, and then another post about you being the boy in the Dude ’72 photo.

TC: Wow, like buses “two come along at the same time” (an expression we use in London) good luck with writing your post! 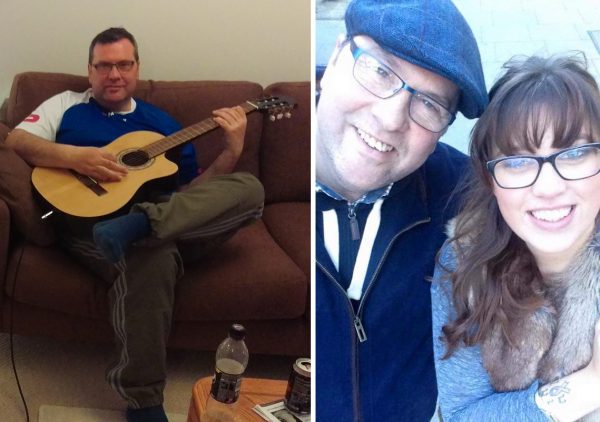 Tony Campbell (Dude ’72) relaxing with his guitar (on left) and with his daughter, Kirstie (on right)

A heartfelt thanks to Tony for sharing his story and to Anna for introducing us!

A fashion observation: interesting to note that, in the photo on the right, Tony is wearing an old-fashioned flat cap — the same type of hat that one the “young dudes” in the 1917 illustration also wears.

Mark Dery, whose 2013 essay revealed so much about the illustrated cover, also had some admiring words for Mick Rock’s photo of young Tony Campbell:

… he had originally considered using a photo he’d taken earlier that year, on a playground near some public housing in Camden Town, of a pre-teen kid striking a guitar-hero pose. Clutching a homemade cardboard guitar strung with strings of twine, sporting clownish make-up in an Our Gang approximation of the glam look, the boy radiates pure delight—and the goofy pleasure of hamminess having a laugh at its own expense. A joyous image, it channels every fan’s fantasy of rock rapture while at the same time sending up the star-making machinery that can give just about anyone a celebrity makeover. As a cover illustration, the photo would have encouraged a broader reading of the song as a generational, rather than a glam, anthem, topping it off with a dollop of working-class consciousness appropriate to an unabashedly blue-collar band like Mott.

Why Rock didn’t use it is a mystery, even to him.

From Wikipedia’s page about the Third Eye Blind album:

The album cover is by photographer Mick Rock, and, according to [frontman, Stephan] Jenkins,  screams “rock joy”.

The caption for Mick Rock’s Dude ’72 #2, published in London, Portrait of a City:

I wonder what happened to the boy, “Dude 72”, a star in the making.

« All the Young Dudes Album Cover: illustrated in 1917
Packaging in the news: “tamper-evident” Bereg bottles »