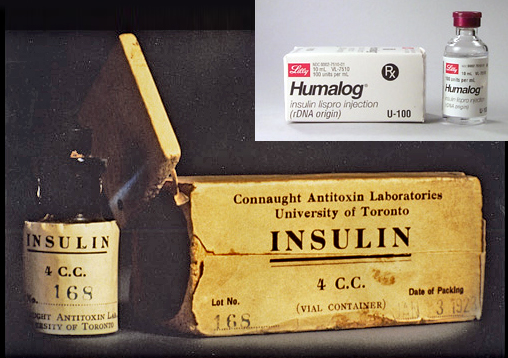 Via today’s NY Times: “Breakthrough: The Dramatic Story of the Discovery of Insulin” an exhibition at the New-York Historical Society that opens today.

The packaging has changed surprisingly little since its earliest manufacture subsequent to its discovery in Canada in 1921. The large photo above, from Eli Lilly and Company Archives, is of early insulin packaging from 1923. The inset photo is the kind of insulin that I take today—also manufactured by Eli Lilly, but made from recombinant (synthetic human) DNA rather than pork & beef pancreas…

The expense and logistics of large-scale insulin manufacture were initially daunting. But soon trainloads of frozen cattle and pig pancreas from the giant Chicago slaughterhouses began to arrive at Lilly’s plant. By 1932 the drug’s price had fallen by 90 percent. 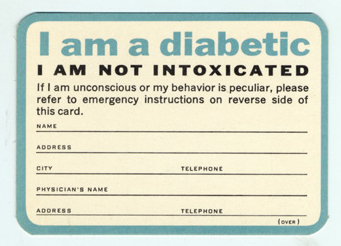 The “I am not intoxicated” card (on right) is also from the exhibit. I remember being given a card like this when I first became diabetic. A serious thing since diabetics having insulin reactions have at times been killed by police officers, misconstruing their symptoms.

Yet it also seems like a “Ceci n’est pas une pipe” sort of paradoxical statement whose truth might be difficult to parse. Since a diabetic could conceivably be intoxicated. I, myself, have (on super-rare occasions) had low blood sugar and been (slightly) intoxicated simultaneously. (The thing to do at that point is to immediately switch to juice.)

Carrying a card like this serves a similar function to medic alert tags. Both of which, one could say, work as a kind of packaging—a “care instructions” tag for the unconscious diabetic.

One thing I wonder about, since insulin first came out around the same time as American and Canadian prohibitions: were tipsy-acting diabetics treated worse due to the illegality of drinking?