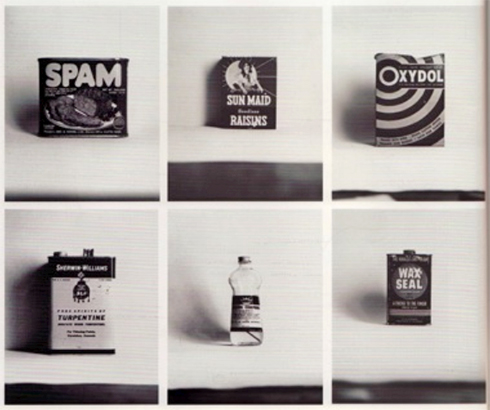 Above are six of the “seven products” that appeared in Ed Ruscha’s book of photographs, entitled Seven Products, Twentyfive Apartments, Three Palm Trees, Six Rooftops and One Aerial View.

Photography has played a crucial role throughout Ruscha’s career… most memorably as the imagery for more than a dozen books that present precisely what their titles describe. His photographs are straightforward, even deadpan, in their depiction of subjects that are not generally thought of as having aesthetic qualities. His “Products” pictures, for example, feature boxes of Sunmaid raisins and Oxydol detergent and a can of Sherwin Williams turpentine in relatively formal still lifes.

from Wikipedia’s entry on Ed Ruscha

Besides the Sun-Maid raisins box, —which Ruscha also used in his painting, Box Smashed Flat, that we discussed for two days last week— there are also a number of other brands represented here that we’ve previously taken an interest in… a rectangular can of Spam (now more well-known as a form of unwanted communication than as a food product); a box of Oxydol, with its cropped concentric circles; a can of Sherwin-Williams turpentine, with a Sherwin-Williams paint can in its pictorial logo.

What is it about black and white photos of product packaging?

The products above were ones that were on the market and readily available for Ruscha to photograph more than 50 years ago, but even if they were recent photographs of brand new products, they would still tend to look antique in black & white. (See also: Trix Cereal X-Ray Pack in black & white)

It also used to be more of a graphic-design-discipline thing, when designing product logos or other packaging graphics, to first sketch out ideas in black and white. Color was seen almost as a gratuitous element that could be decided later. 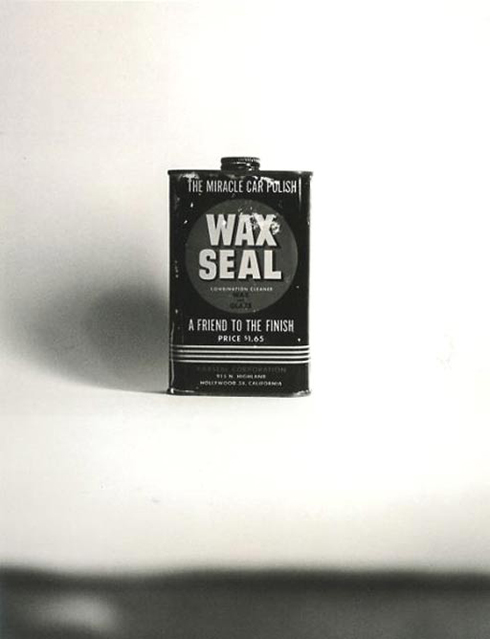 This picture was taken long ago, in 1961. It was just a dried-up old can of polish that had been kicked around a bit. It had no special significance for me, and I was probably just polishing my car when I began to look at the can and see it had potential, either to become a painting or just be itself. In the end, I felt a photograph was the way to go.

So I set it up on a piece of paper in the corner of my studio. The end of the paper went haphazardly out of focus, with the dark line you can see at the bottom — I really like the clumsiness of that. I didn’t do a great deal with the lighting either, I recall. I wanted to dress this little thing up, without cleaning it, so that the little nicks and bruises on the can could actually come out. It’s like putting a child in front of an audience of 500 people and saying, “Go stand in the middle of the stage and smile, and do a little curtsy.”

When you look at it today, though, it does begin to edge into nostalgia. That’s not something that I aimed at then, because although it looks like a very old-fashioned can now, in 1961 it did not. That’s the one thing I regret about any photograph: that eventually it becomes historical, nostalgic, out of date. It begins to look like the age it came from.

I’m interested in glorifying something that we in the world would say doesn’t deserve being glorified. Something that’s forgotten, focused on as though it were some sort of sacred object. That’s the mystery of it all: what it is that will catch my attention. In this case it’s a homely little metal can of car polish.

One thing I’ve been trying to figure out is: how many 1961 product still lifes did Ruscha make in all? I’ve only found images of the six brands above, but in the book mentioned above, there were supposed to be seven products. There was a second version of the Spam photo, in which the product is cut into two pieces, but that wouldn’t be counted as a seventh product, I don’t think… 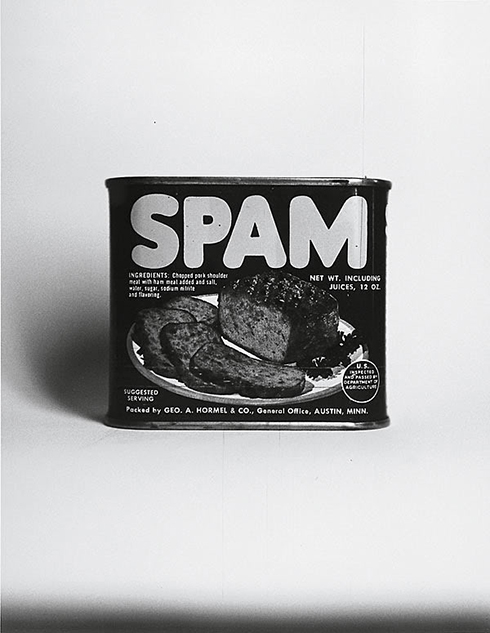 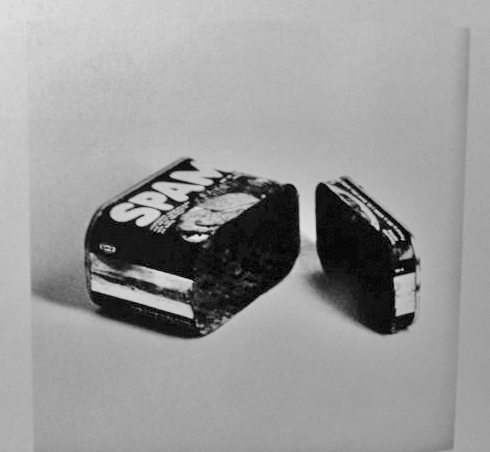 (More about the missing products, after the fold…) 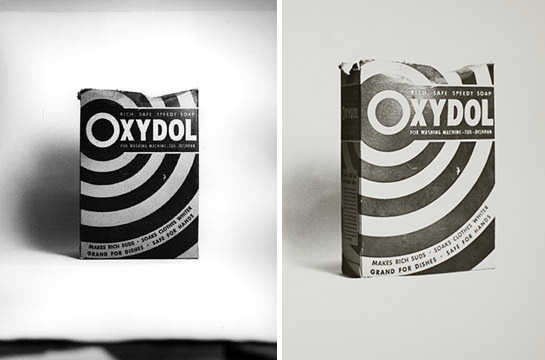 Oxydol, is another product that appears to have been photographed more than once. (The photo on the right is from The Art Institute of Chicago’s website.)

Following his graduation from art school in 1960, where he studied painting, Ed Ruscha worked as a commercial layout artist. He took up photography early, producing images of signage and commercial products that point toward the photobooks and signature compositions he made on paper and canvas throughout the 1960s and ’70s. Oxydol is part of a group of images of common consumer goods that Ruscha claims to have randomly selected in his studio, without regard to aesthetic or emotional significance. Each object was photographed isolated and centered on a white background, a setup derived from advertising imagery. He later described his approach: “If you look at a product that is easily overlooked or not meant to have any real importance, you can focus on it to the point where you give it importance. That’s what those product pictures were like.” 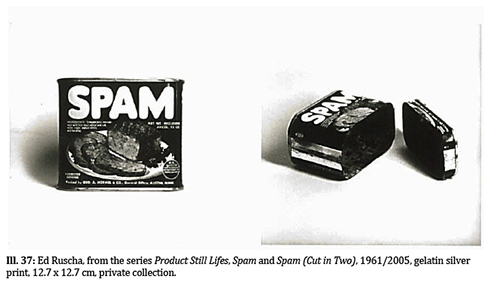 Some other brands of product that Ruscha apparently photographed, are cited in Melissa Michelle Lumbroso’s 2012 thesis…

…it is the products of postwar American consumerism that frequently appear in Ed Ruscha’s photographs, for example in found items, rather, the mere signs of these items in their packaged form, a few also photographed unwrapped, including a range of edibles and household products: a tin of Spam, a box of Sun Maid raisins, a can of Campbell’s vegetable beef soup, a box of Maja soap, a box of Oxydol laundry and dish detergent, and a can of Sherwin-Williams turpentine, to name a few. Each item is photographed in front of a white background, the only suggestion of depth being a shadow cast to the left of the object and the blurry lower edges of the photographs. Whereas the title itself may hint at the series’ relationship to the tradition of still life, one could posit that throughout his work, Ruscha has the posture of a still life picture-maker. The artist’s concern is the overlooked, showing a deep curiosity in the rendering of things and signs of quotidianity regardless of the import accorded them by society across his palette of media; Ruscha’s focus on the wealth as well as decay of the West Coast of the post-war era; the largely consistent absence of the human form. In an analogy to the gaze of the still life, almost in avowal to the concept of fetishism, Ruscha said about the Product Still Lifes: “Indians might look at a kachina doll and say that it has amazing power. Here, if you look at a product that is easily overlooked or not meant to have any real importance, you can focus on it to the point where you give it importance.”

I was sorry not to find any reproductions of Ruscha’s Campbell’s soup can photo.

Warhol’s soup cans didn’t debut until 1962. A 1961 photo by Ruscha might have technically constituted an earlier precedent, although it was likely a cultural coincidence occurring on both coasts simultaneously.

To the casual eye, West and East seemed much the same. And why not? A soup can is a soup can, whatever the clime. Like their New York counterparts, California pop painters gaze not upon nature or the human form but upon the most banal man-made objects or the most routine images of everyday life. These things are the same all over the nation…  But upon closer scrutiny the Californians shared common aspects and a sort of group triumph: their stuff was even drearier than that of the Easterners. 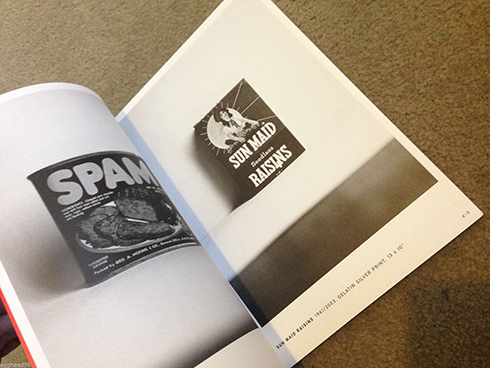 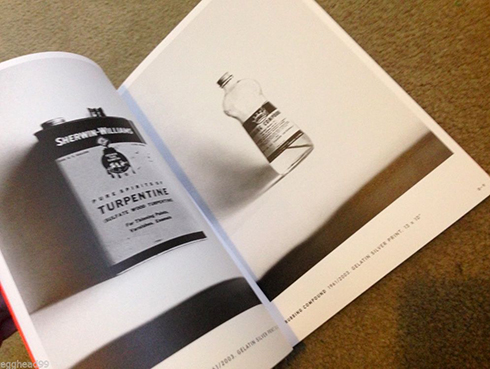 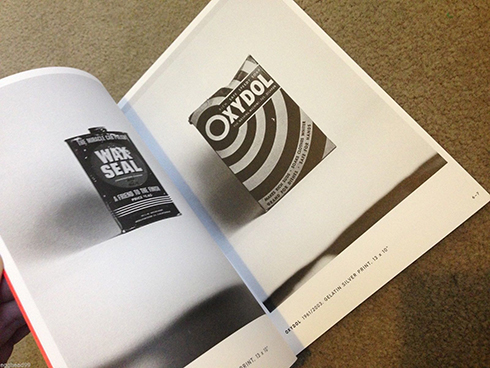 Above are three pages spreads from the aforementioned Seven Products, Twentyfive Apartments, Three Palm Trees, Six Rooftops and One Aerial View. (from a copy recently sold copy on eBay for $299.99)

So I’m just wondering: was the seventh product a box of “Maja” soap or a can of Cambell’s soup?

Or was it something else, entirely?