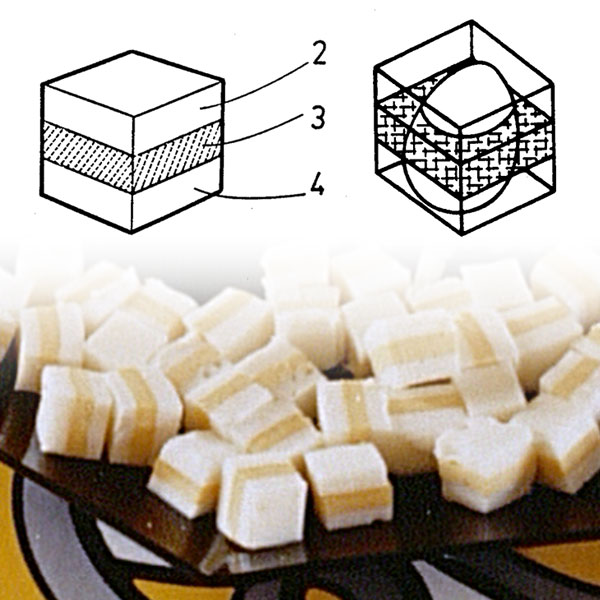 Huc’s process is technically similar to the “long egg.” Long eggs, however were long & cylindrical with a tubular yolk core. (This was so that its slices would resemble those of a natural hard boiled egg.) Huc took a decisive step away that type of simulated naturalism.

Huc’s company (Ov’Action) launched the invention. First in France, with plans to also bring the product to Canada and to the U.S.

For the product’s brandname they trademarked a portmanteau of Apéritif and oeuf (egg): Apéroeuf. [Sometime it was also spelled with a diphthong/ligature as: Apérœuf]

Its publicity, however, centered on the squareness of the product.

Now… there’s a square egg. Cristian Huc, of Ov’ Action Inc., Lieven, France, is looking for North American partners to help market its bite-sized square egg — a fully-cooked, reconstituted hard egg cube, two-thirds of an inch square. The product is designed as an hors d’oeuvre snack and is made up of three layers, with white at the top and bottom and yellow in between. The square egg has a 21-day shelf life and sells in France for $1.50-$2.00 (U.S.) for a package of 24.

The French food company Ov’action announced Tuesday the upcoming sale of “Apéroeuf,” a cube egg about two centimeters in size, formed of two layers of white enclosing a slice of yellow.

Carried out using an exclusive and complex microwave cooking process — developed after three years of study and $2 million in investments — the cube egg has been tested “successfully” in restaurants, according to Ov’action. The “Apéroeuf” range will also include varieties based on vegetables, seafood or meat.

Ov’Action wants to market 2,000 to 3,000 tons of “Apéroeuf” annually and export its products, or its know-how, particularly in Anglo-Saxon countries and in Japan.

But, in this case, since Huc’s square eggs were actually being sold—at least in France, I really wanted to find a product photo. This wasn’t easy, but due diligence sometimes pays off… 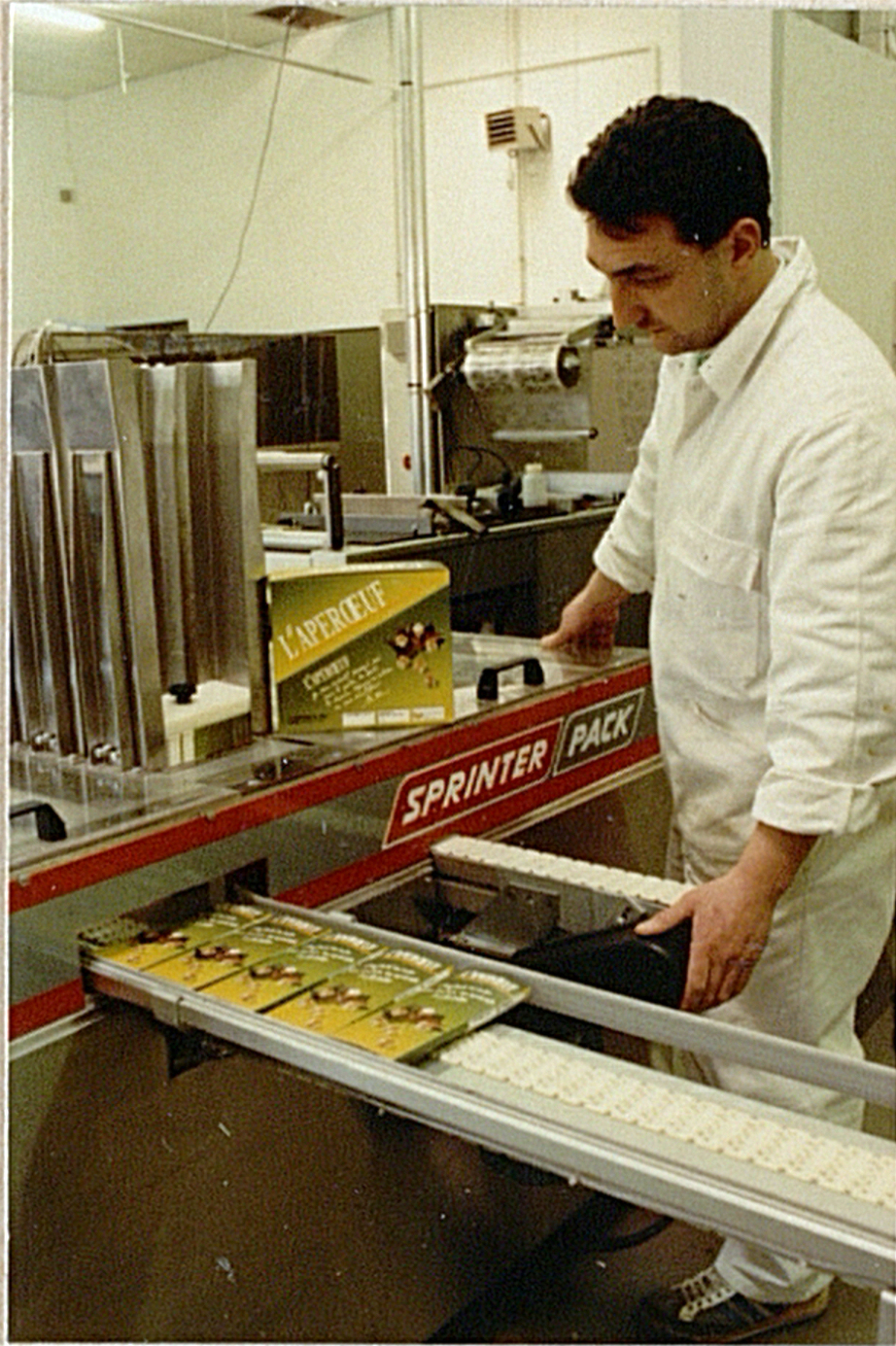 I searched in vain on ebay.fr hoping to find some vintage packaging for the square eggs that I’d read were being sold in France during the eighties. None of the newspapers I’d seen had published a press photo in their coverage. (Although one or two included in-house illustrations of disgruntled chickens.)

Finally, I found references to Apéroeuf in the national archives of France. Not speaking French, I still somehow managed to contact the appropriate department. And 14 days later they actually emailed me a link to the photos that I had requested. J’étais si heureux!

Photographer J.Y. Murray (Jean-Yves Murray) took these photos—and many others in this archive. His photo above shows the 24 pack boxes, as well as the larger shelf display box that held the smaller boxes.

A shelf for sales promotion

The “square egg” packages can be stored in the display box where they will remain cool and fresh for 24 hours.

Once L’Aperoeuf has been individually wrapped, in what the company claims to be “a complex and original type of paper”, it is packed in thermal trays that hold 24 separate cubes, in two re-wrapped groups of 12 cubes each. This style of packaging allows groups of 12 cubes to be consumed, separately. 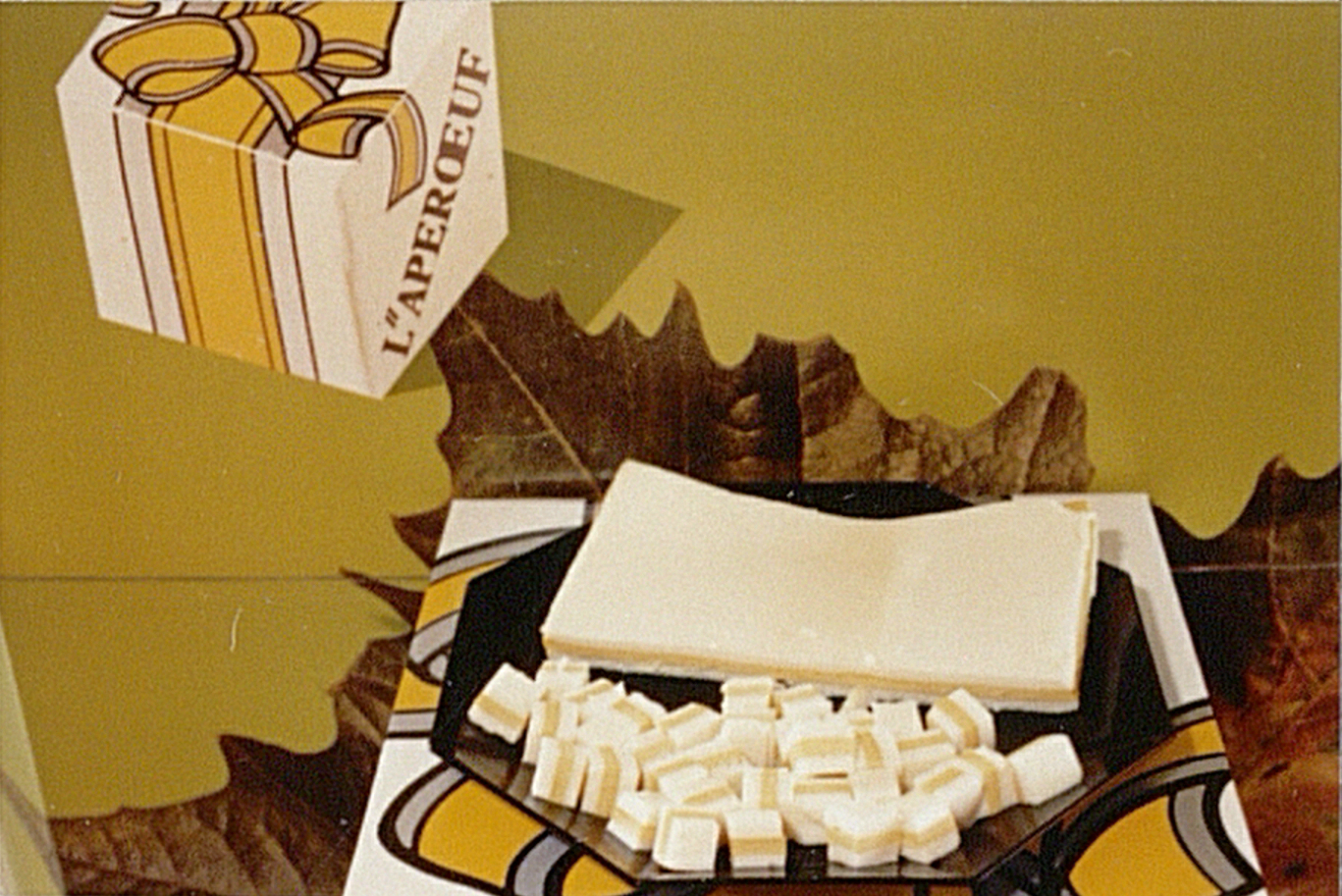 In another of Murray’s photographs, we see the company using a yellow ribbon motif. Clearly they meant for this cube-shaped gift box to serve as a visual metaphor for their product. A yellow ribbon to match their square egg’s band of yellow yolk.