If the “long egg” from our previous post, was a deliberate deformation of eggs that consumers, for the most part, were never meant to be aware of—(the whole point, being to create optimal and natural looking egg slices)—there was also an invention, introduced in the 1970s that invited consumers to participate in deforming the egg’s natural shape. The preferred embodiment of this concept? Cube-shaped egg makers.

A good egg, concluded a former knitwear manufacturer in Miami, is a square egg. At least when it is hard-boiled and prone in its natural shape to roll across a plate. Thus Stan Pargman set up the Square Egg Co. to make a clear acrylic contraption that encases a cooked, peeled egg and, after ten minutes in a refrigerator, releases it reshaped. Is the world ready for it? Apparently Los Angeles is. When 1,000 of the gadgets went on sale in May Co. department stores there last month, they were snapped up in one day. A reorder of 5,000 went almost as quickly. The buyers did not seem to care that they could immobilize wandering egg-shaped eggs simply by cutting them in half —and still get a square meal.

More of a novelty item, than a serious effort to solve “the problem” of hard boiled eggs rolling around on plates. And although The Square Egg Company’s owner cites this as his reason for making the product, one must bear in mind that he also has stated elsewhere, that square eggs went well with contemporary furniture.

Reading the 1970s stories about “The Square Egg Maker,” you might think that Stan Pargman invented the device. But you’d be wrong. It was Masashi Nakagawa.

In his patent, Nakagawa explains that the problem he sought to solve with his “Apparatus for Deforming Boiled Egg” was the problem of creating ornamental boiled eggs. “It is very troublesome and time-consuming to change the original natural shape by cutting it with a knife…” he writes, stating that his invention’s true raison d’être was “…to provide an apparatus and a method for changing a whole boiled egg into an aesthetic cubic shape.” 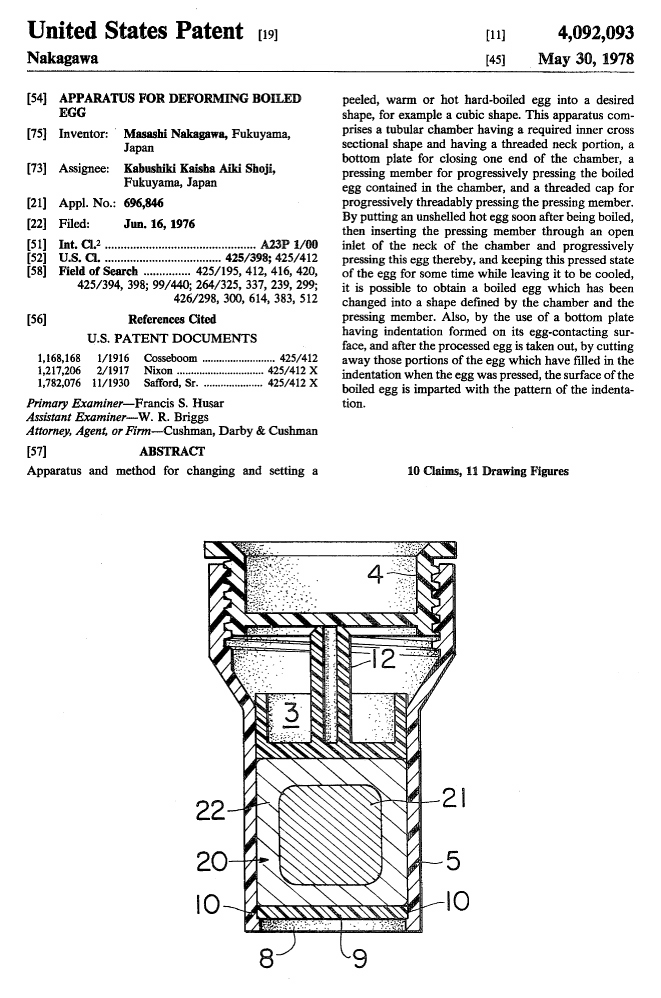 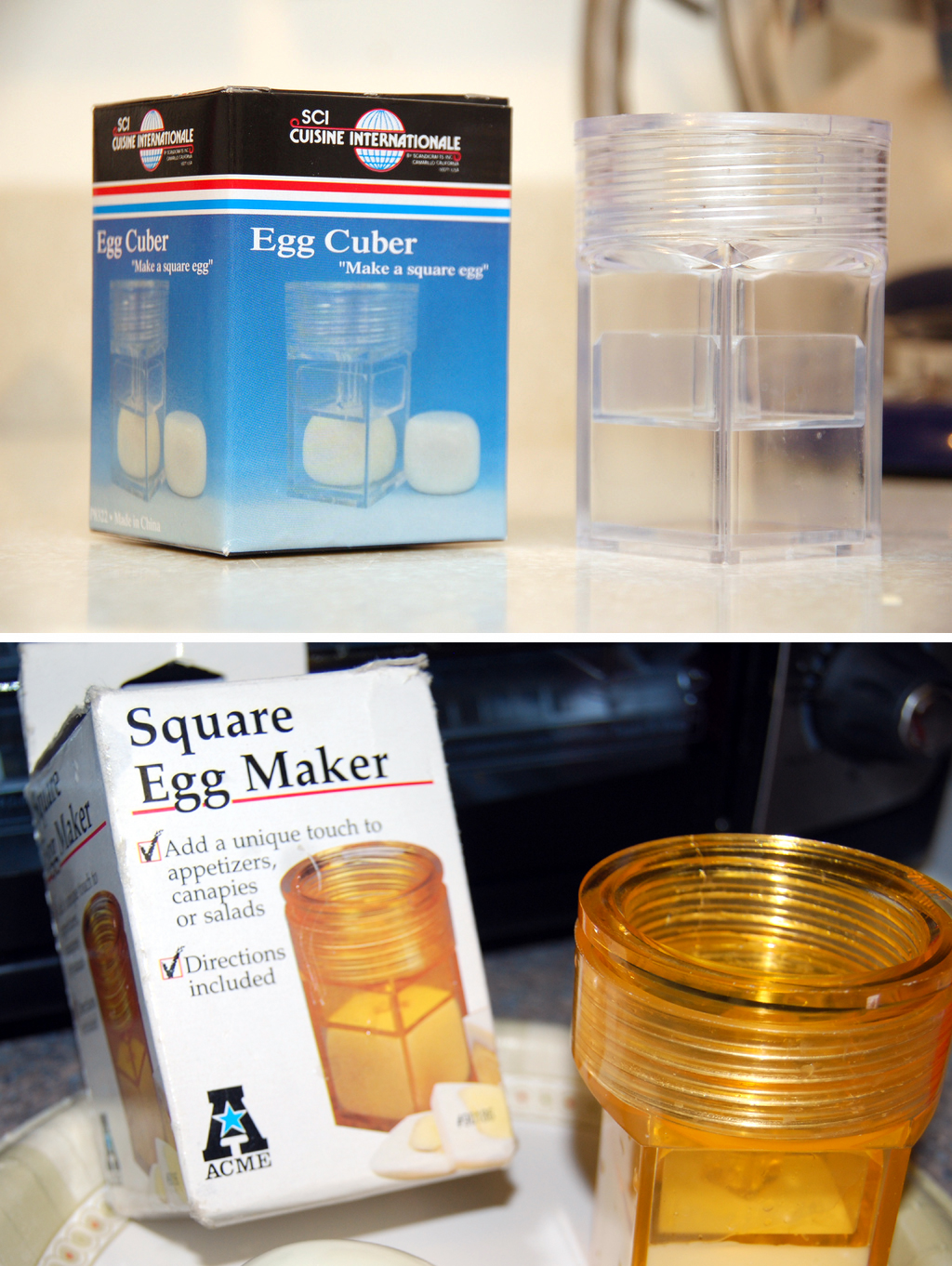 And thus concludes our egg-shaped week.

Thank you to Terre Dunivant of Gaia Graphics for emailing about the recent literary appearance of the square egg maker (and its box) in Carolyn Parkhurst’s “The Dogs of Babel.” (also known as Lorelei’s Secret in the UK)

A small cardboard box, labeled Square Egg Press caught my eye. The picture on the front showed a plate of hard-boiled white cubes on a bed of parsley. One of the cubes was cut into careful slices, displaying the square shock of yellow yolk inside. I opened the box and found a hard plastic cylinder with a squat square base. According to the instructions, you were supposed to place a hard-boiled egg, warm and quivering and rid of its shell, into the square chamber, then drop a sort of plastic hat on top of it. There was a screw-on lid, which, I gathered, pushed down on this egg hat, applying the pressure necessary to negotiate the egg into its new, unnatural shape.

“What is this?” l asked, turning back to her.

“Well,” she said, reading from the copy on the box, “apparently, it turns ordinary hard-boiled eggs into a unique square taste treat.”

…And from the NY Times review, an interpretation of the square egg’s symbolism:

Ms. Parkhurst moves her book back and forth between memories of Lexy and Paul’s love affair and the frustration of his lonely new life. Those memories can be perilously adorable. These two met at a yard sale where Lexy sold Paul a device for making square eggs; then he cooked her some; then, after their romance was off and running, she wrote “square eggs” on his hands with a marker, listing gifts that he had given her…

But this is a book that wears its symbolism on its sleeve, at great risk but with startling effectiveness. In fact, Lexy is a square egg herself, dangerously unable to fit the predictable wifely mold.

Janet Maslin
In the Silence After Death, Struggling to Find Speech
The New York Times, June 20, 2003

Not that the square-egg maker is the most notable feature of Parkurst’s first novel—(which also features a talking dog)—but the author has been known, on occasion, to bring the device along as a show-and-tell prop to her readings, promoting the book.