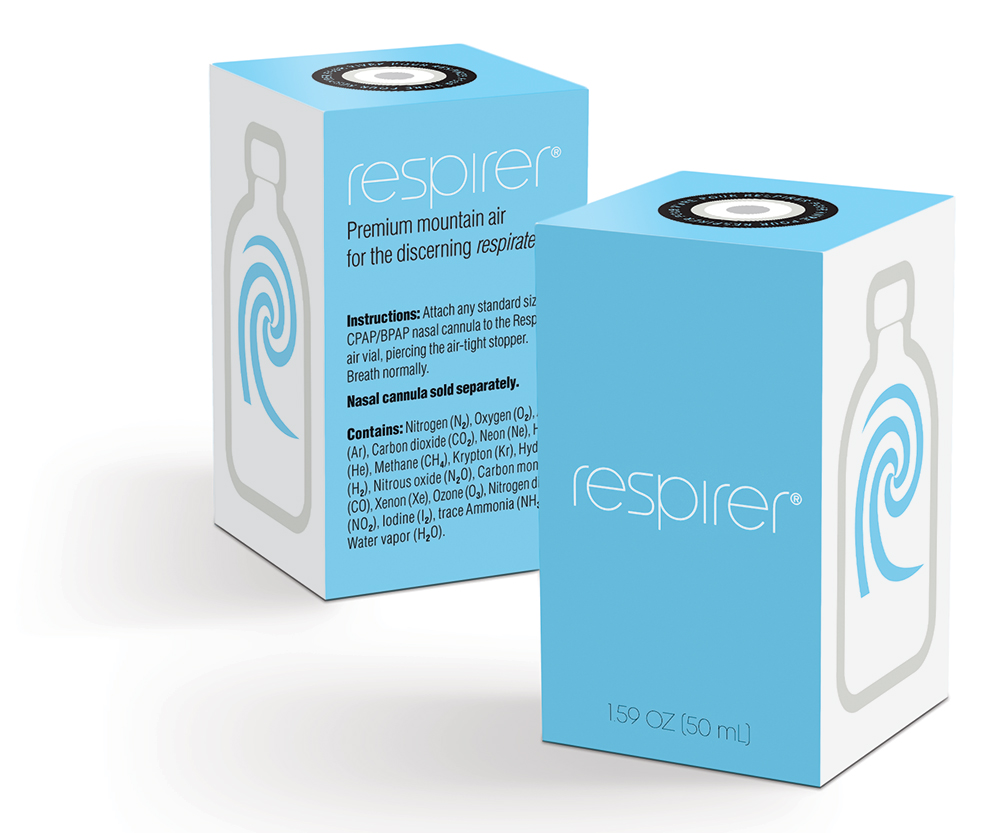 Branding and package design for “Respirer” is Beach Packaging Design’s contribution to the upcoming As Real As It Gets show, organized by writer, Rob Walker.

The idea for this luxury air brand comes from Dan Ariely’s essay, The Upside of Useless Stuff….

Imagine that I started a business selling beautiful bottles of air for $10. I’d call them Respirer (respir-AY– it’s French!). My advertisements would laud Respirer’s purity, evoking bracing mountain air. (Fewer than 10 parts per trillion of particulate in every bottle!) Celebrities would endorse Respirer’s rejuvenating effects. (Kate Winslet starts every day with Respirer!) In a matter of months, department stores would be selling out, and spas would brag that their saunas piped in pure Respirer air.

Respirer would be a runaway hit. Of course, it would be just air, and in most places you could get all the reasonably high-quality air you wanted free. So how could this clearly useless product have a beneficial effect on the economy? It would motivate people. By hyping Respirer, I’d give consumers something to want, and in order to be able to afford it, they’d have to work. They’d have to be productive.

Giving Ariely’s hypothetical product a tangible form was Walker’s idea (see: Rarified Air) and I was honored that he asked us to help envision its packaging. 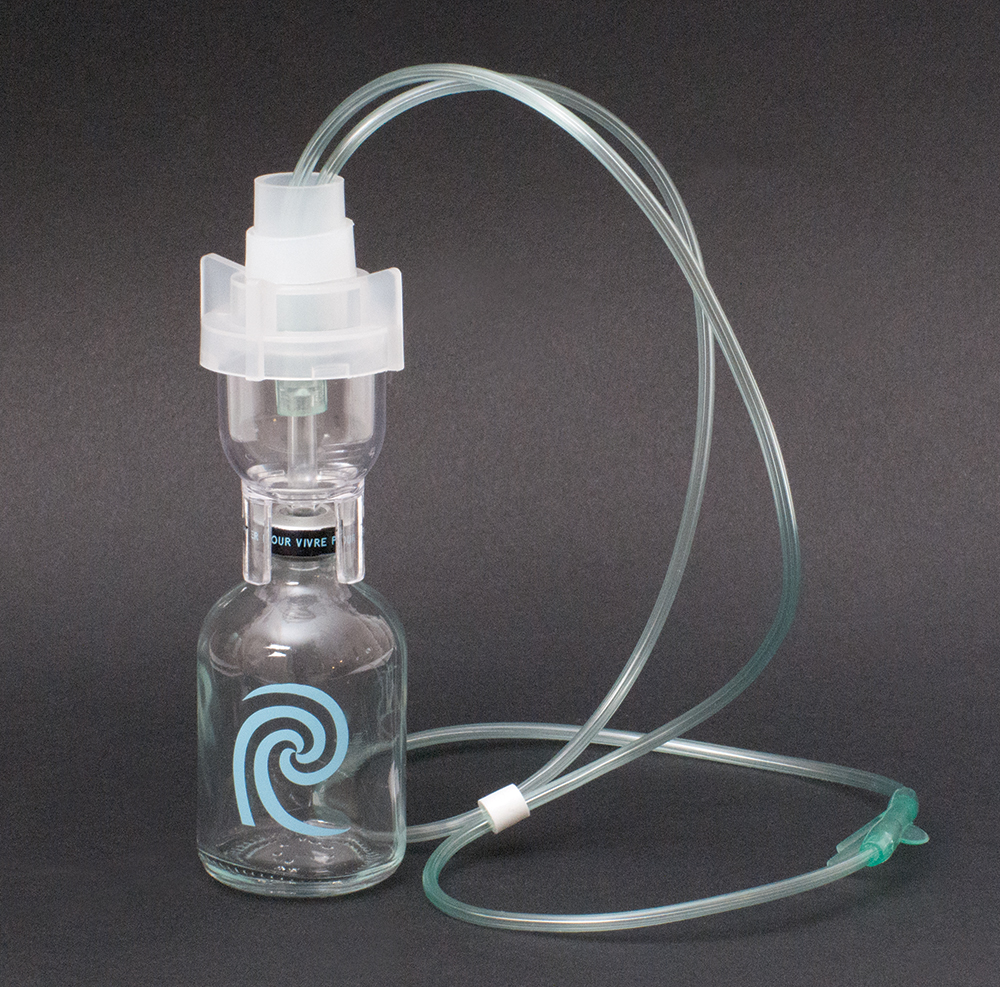 While, a container full of air is still perceived mainly as being an empty package, it’s worth remembering that bottled water also seemed like an unnecessary product in the beginning.

We researched similar air-related products in search of a suitable niche for our new luxury brand. Even as a fictional product, it’s a more crowded category than you might imagine… 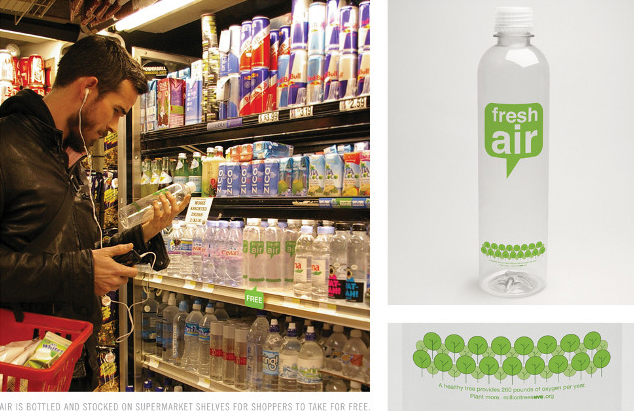 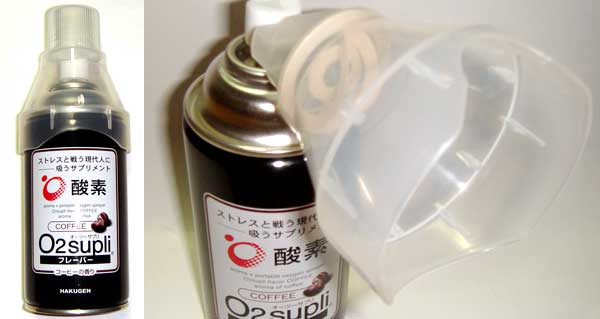 In 2006 Seven Eleven Japan was selling canned oxygen under the brand name “02 Supli” (The can’s cap also served as an oxygen mask.) 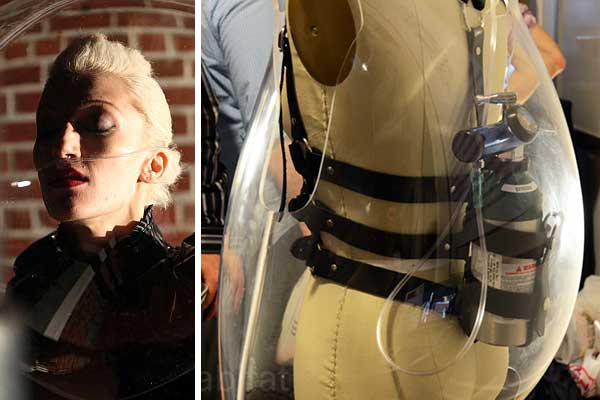 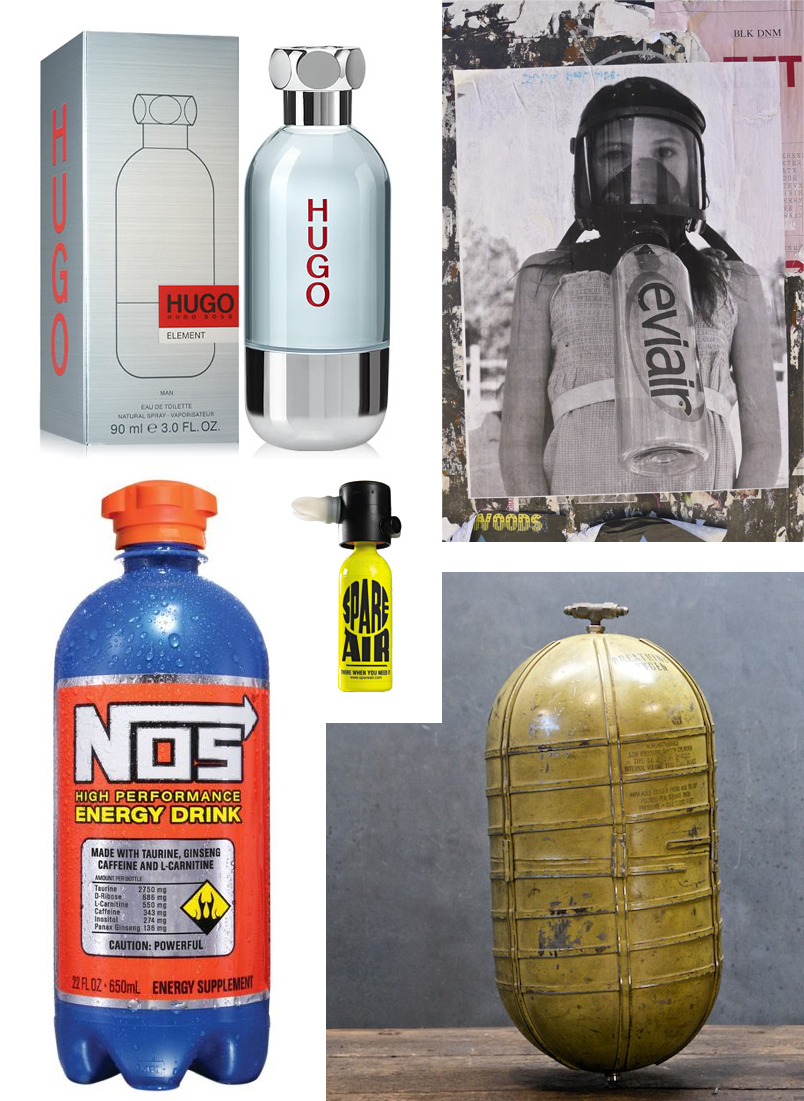 Top left: air-tank-shaped Hugo Element Eau De Toilette (“Just like you need air and water. This new fragrance is a vital Element to revive and recharge in the city. The bottle is inspired by an Oxygen tank and enables you to breathe anywhere”); top right: one of street artist Evair’s bottled air posters; lower left: the Nitrous-Oxide tank shaped (petaloid base) NOS bottle; center: “Spare Air” for scuba divers; lower right: a vintage air tank

To better differentiate the luxury of Respirer, we thought it best to avoid the oxygen tank associations and instead followed Duchamp’s lead… 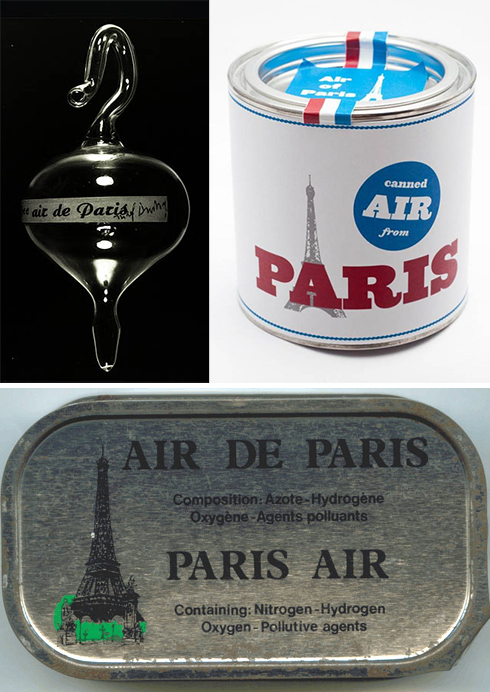 “…wanting to bring back a present to my friends the Arensberg, I asked the  provision pharmacist to empty a glass container full of serum and to seal it again. This is the precious pool of 50 ccs of air of Paris, I brought back to the Arensberg in 1919.”

Although there is some art historical debate about whether Duchamp’s story is completely factual, the idea of collecting air as an ephemeral souvenir is clear enough.

In his Rarified Air essay, Walker had already noted how Duchamp’s 50 cc of air de Paris served as an early precedent for air as an ephemeral souvenir.

Once we begin collecting city air, it’s a short step to the idea of selling gag-gift products containing polluted air. But in Dan Ariely’s original product description Respirer was “bracing mountain air.” So, clearly, our product would not be souvenir air from Paris.

I did like Duchamp’s idea of using a pharmaceutical vial, however. (As a diabetic for 35 years, I’ve grown pretty attached to those rubber-stoppered insulin vials.) But how was the consumer supposed to consume this luxurious air? 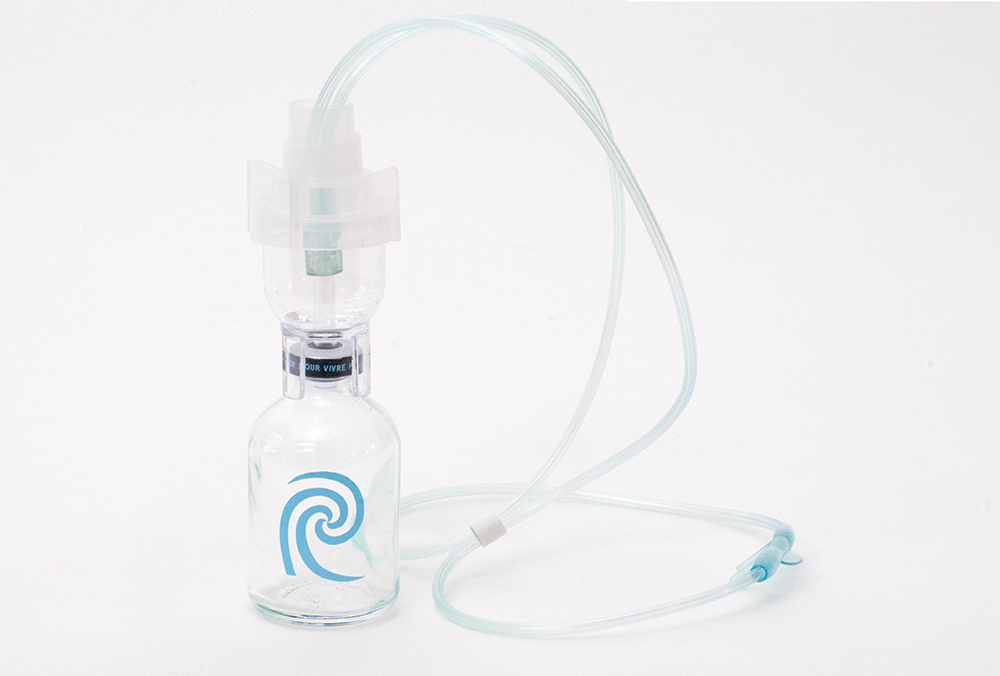 We went with a nasal cannula attachment (sold separately). 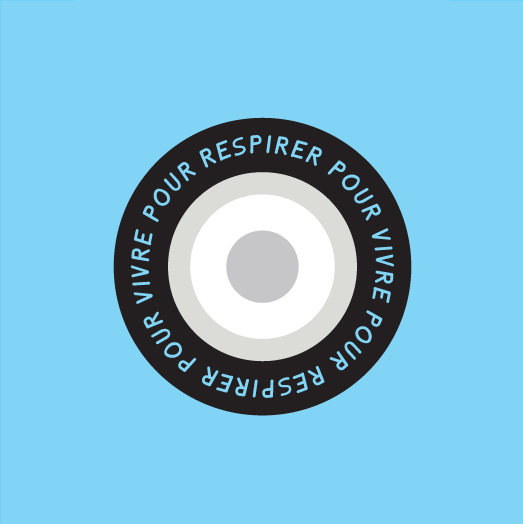 Around the cap of the vial and also on the box top is an endless, circular sentence that means “to breathe in order to live in order to breathe…”

This was Walker’s idea for Respirer’s tagline. It was my idea to make it circular (with thanks to Tom Ronse for a proper French translation). The tiny writing on the edge is also meant to be Duchampian in the manner of his readymade comb.

Finally, there was the issue of in-store marketing. We needed a counter card. I was sort of obsessed with a Louis Vuitton ad from 2007 that used Gorbachev as a celebrity endorsement. I wanted to try something similar for Respirer with a posthumous celebrity endorsement from Duchamp. 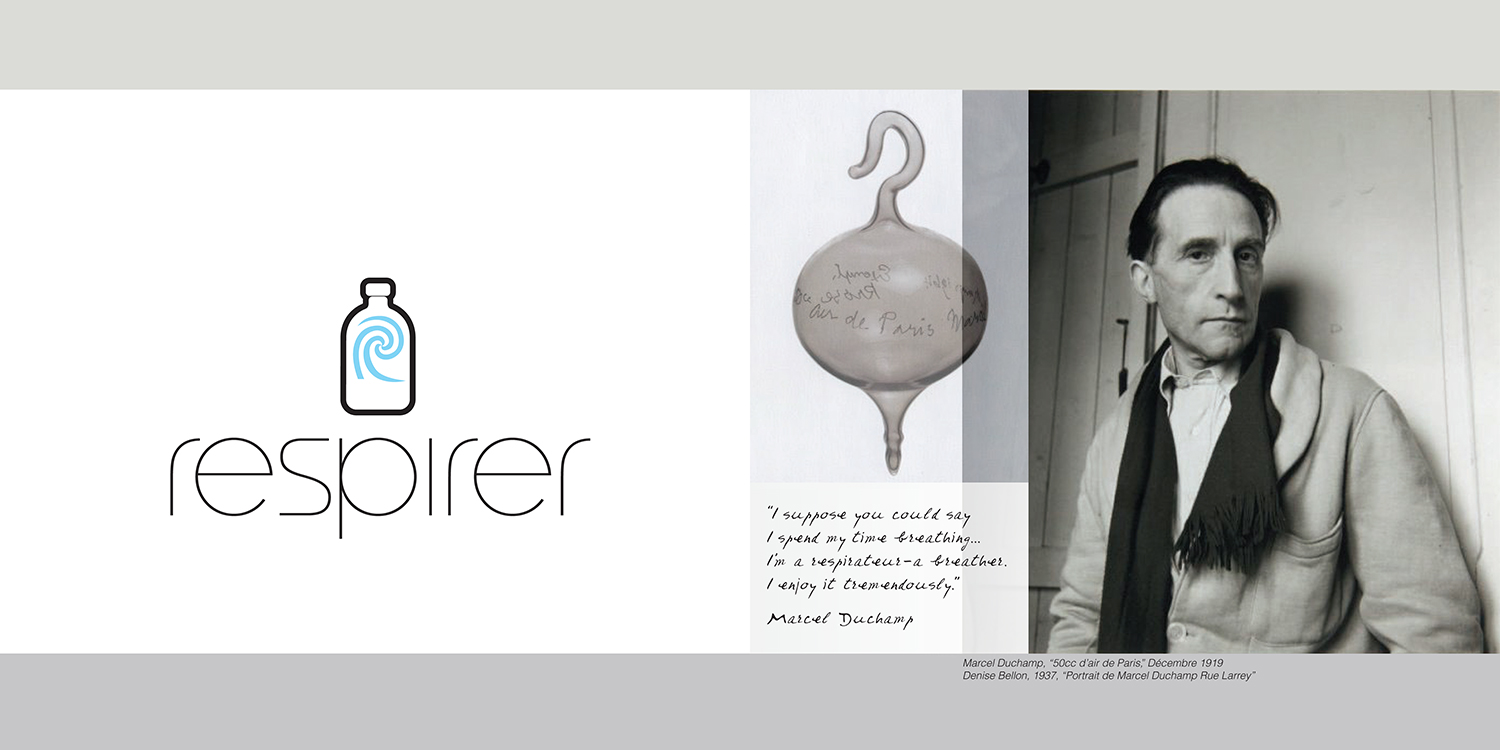 Duchamp’s endorsement is not as arbitrary as it might seem. Last year we wrote about his perfume readymade, “Beautiful Breath.” And he’s also quoted as having made this statement in 1962:

“I suppose you could say I spend my time breathing… I’m a respirateur — a breather. I enjoy it tremendously.”