An article by Kate Murphy in Sunday’s NY Times (Psst. Look Over Here) cited a recent study at Cornell (Eyes in the Aisles: Why is Cap’n Crunch Looking Down at My Child?) that’s created something of a kids-branding kerfuffle:

Look inside your kitchen cabinet and odds are you have a collection of old friends gazing back at you — the Quaker Oats man, the Sun-Maid girl, Aunt Jemima and maybe a Keebler elf or two. The reason they are there may have more do with your subconscious craving for eye contact than the taste of the products.

In a study published last month in the journal Environment and Behavior, researchers at Cornell University manipulated the gaze of the cartoon rabbit on Trix cereal boxes and found that adult subjects were more likely to choose Trix over competing brands if the rabbit was looking at them rather than away… 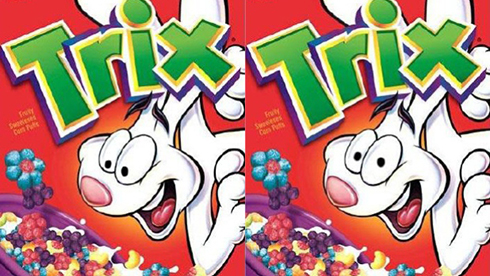 This is pretty much the opposite of what I was saying in 2010 (about eye contact maybe being too confrontational for consumers), but, okay, assuming their scientific methods were kosher, then I was fully on board and ready to learn something new.

I had some doubts, however, about the very next sentence…

…In a creepy corollary, the researchers found that the eyes of characters on boxes of cereal marketed to kids were directed downward, and can meet the upward gaze of children in grocery store aisles.

It was this “corollary” about downward-looking “spokes characters” that caused the aforementioned kerfuffle.

We know Dr. Wansink’s work. He’s done some very interesting research. This is not his best. For example, the study supposedly found that the average shelf placement was 23 inches, and the average height of the supposedly downward looking gaze would therefore be 20.21 inches. Their data.

If this research was in any way meaningful — which it’s not — these supposedly downward looking characters would be looking below eye level of the youngest kids possible.

…An average four-year old is about 40 inches tall. A supposedly downward gazing character would be looking at what exactly? The kid’s belt?

But there’s another flaw to the study that’s even more fundamental: two-dimensional pictures simply do not work that way.

If the cartoon eyes on a cereal box are averted downward, they cannot “meet the upward gaze” of children below. To the children below, the eyes would still appear to be looking downward—not making eye contact.

This is true for the same reason that, in pictures of a face looking at the viewer, the eyes seem to follow you all around the room. Pictures do not reorganized themselves as we move around a room.

For this to work the way they say it works, the faces on these cereal boxes would need to be three dimensional. Or else holograms.

(A video of Brian Wansink discussing the study, follows after the fold…) 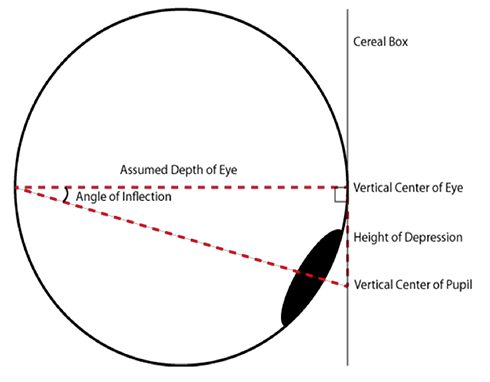 This Illustration from the Cornell study illustrates an erroneous three-dimensional assumption about a two-dimensional picture: the front of the cereal box is shown here as if it were a window in front of a three-dimensional googly eye. If this were true, then: yes, a child below could make eye contact. And, by the same logic, we could walk around to the side of the box and see the character in profile.