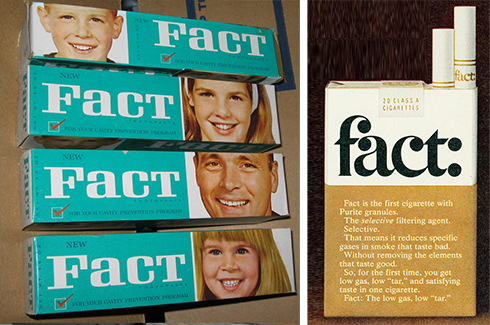 In an effort to counter a growing public mistrust about truth in advertising, some manufacturers in the 1960s and 70s tried giving their products the reassuring brand name, Fact.

1. Fact Toothpaste, manufactured by Bristol-Myers used family member faces and a spare “just the facts” packaging layout on their cartons.

Bristol-Myers, makers of Fact toothpaste, really stirred up the candy manufacturers with ads that proclaimed: “Sweets. Every day your child eats every sweet thing he can get his teeth into. He should avoid sweets. They are bad for teeth. And brush with Fact toothpaste.”

In a statement to Advertising Age, William V. Humphrey, an official of the National Confectioners Association, was quick to retort: “Don’t you think that Bristol- Myers . . . could sell this item on its own merits?” Fact’s promoters replied that the American Dental Association had endorsed the dentrifice and stood behind the claim that sweets cause tooth decay. The ADA Journal enthusiastically agreed: “There is indeed a causal relationship between sugar and dental decay.” It counseled the Confectioners Association to “take its head out of the sand, get out of the business of writing fairy tales, and adopt a positive program designed to reduce a well-known health hazard.” 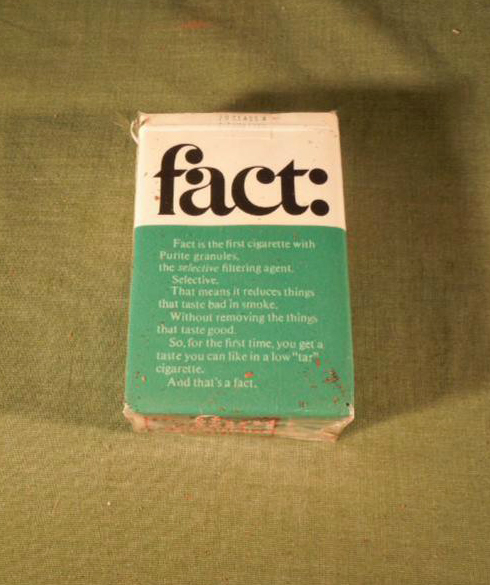 2. Fact Cigarettes, manufactured by Brown & Williamson, used a colon in their trademark followed by quasi-scientific advertising copy set in the style of a dictionary definition ending with the words, “And that’s a fact.” (See also: Declarative Branding)

Fact. A brand first introduced to national markets in November of 1976, Fact holds a positive connotation to its name. Similar to Vantage’s “candid” approach, the Fact ads are straightforward and profess to be nothing but scientific truth. With science comes health, and this cigarette clearly implies it is a healthier cigarette with its “selective” filter.

An internal B&W industry document from 1973 reveals the thought process behind the manufacture of Fact: “The primary source for achieving the growth objective is new brands,” the document says, and “the principal thrust will be in the ‘health’ area”. Three years later, Fact was released as B&W’s answer to Philip Morris’s Merit brand, and its ad copy reflects the source of inspiration; short, crisp, authoritative sentences and what seems to be a basis in science ground the ads. Unlike Merit, however, Fact was pulled from the market after only two years on shelves. In 1978, B&W discontinued production of Fact cigarettes, as “the brand failed to meet the company’s sales expectations”.

As is the case with the majority of products on the market, brands of cigarettes were named in order to send particular messages to consumers. … The choice of certain brand names also extends to tobacco companies’ efforts to ease the concerns of worried smokers. Indeed, when the tobacco companies could no longer rely on explicit health claims in their advertisements due to FTC regulation, they developed countless methods to subliminally convey the same message, including brand name. Fact is an obvious example of this movement.

Working against this new factuality, was a notorious internal memo from Brown & Williamson’s vice president for marketing:

“Doubt is our product since it is the best means of competing with the “body of fact” that exists in the mind of the general public.”

(Some additional images, after the fold…) 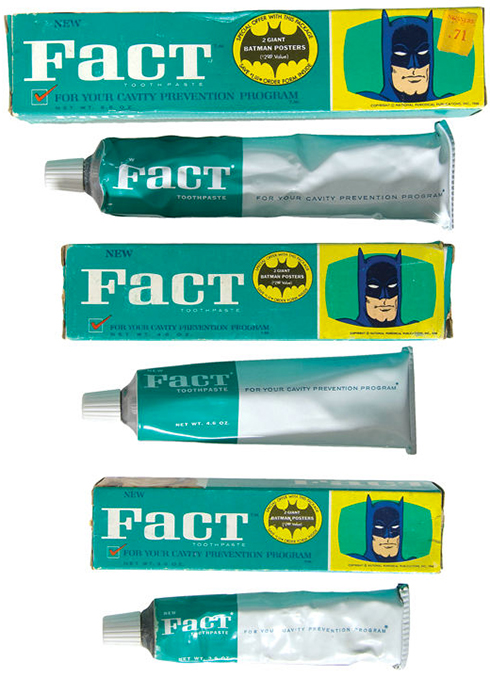 Oddly, Fact Toothpaste also used fictional characters as shown in these children’s Batman-theme cartons above. One thing that a brand named “Fact” ought to be is non-fictional. (See also: Fictional Products and Respirer) 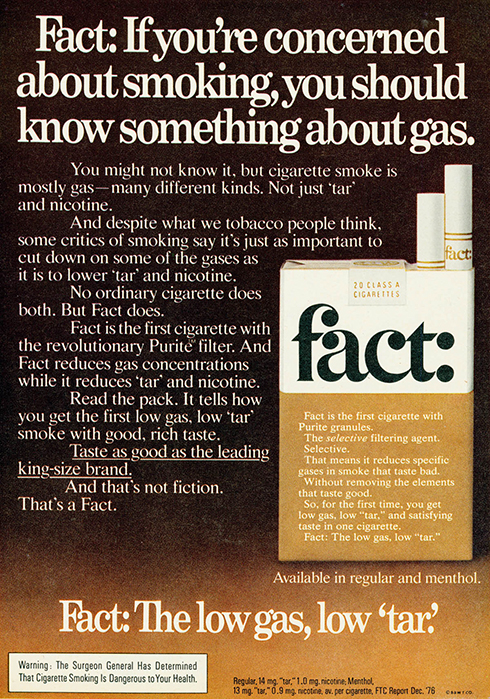 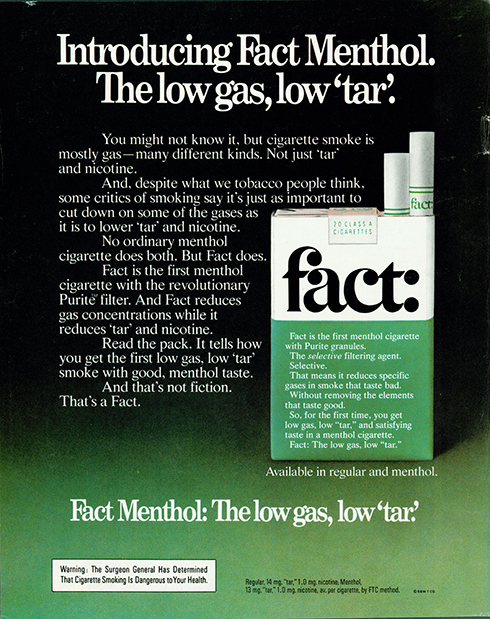