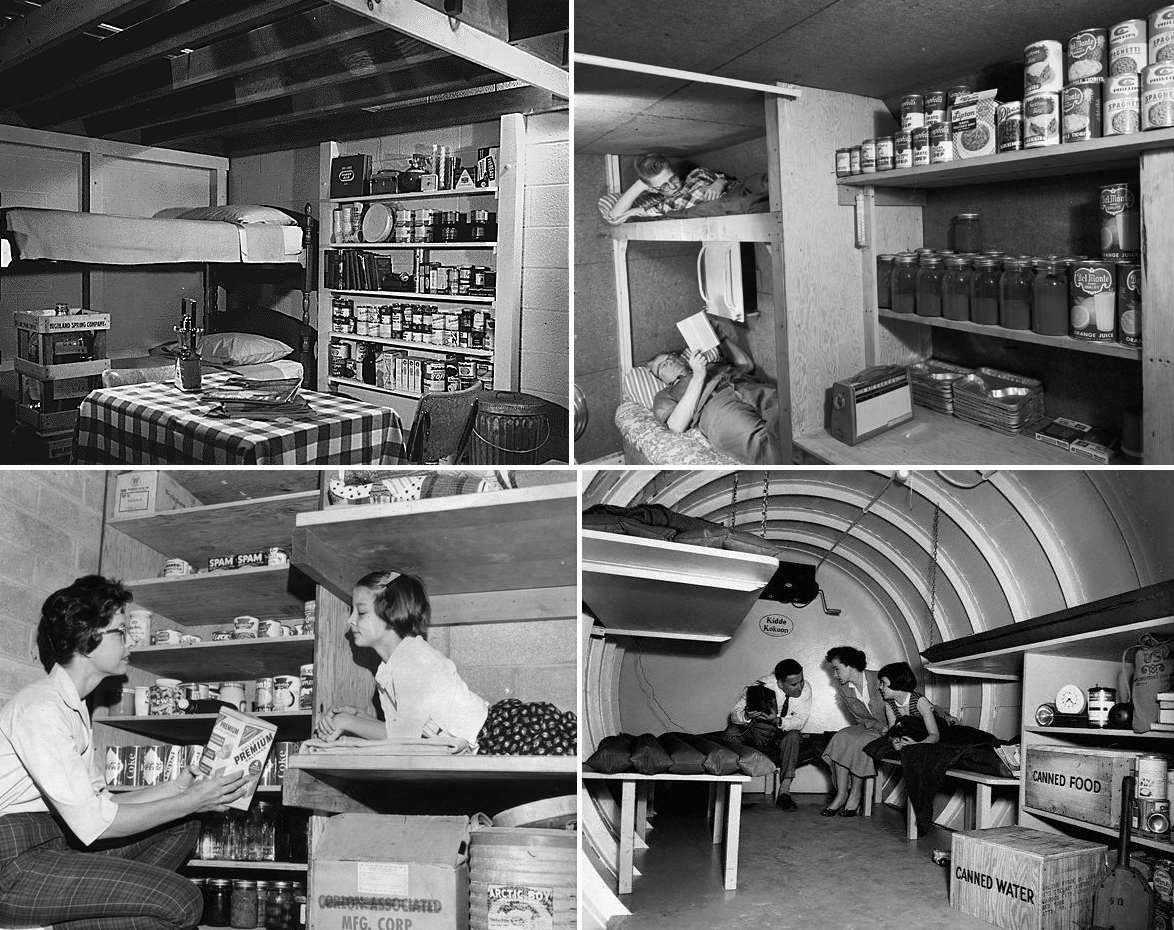 Today we look at packaged food in family fallout shelters.

In the 1960s, rather than promising “a chicken in every pot” president Kennedy called for “A fallout shelter for everybody, as rapidly as possible.”

In his book, Populuxe—(in the chapter entitled “Just Push The Button”)—Thomas Hine makes an interesting point about Kennedy’s proposal for building home fallout shelters: that it would privatize civil defense.

Kennedy’s program… would have transformed civil defense from a community-based responsibility to one that was carried out by individual suburban families. Air-raid shelters were hardly a new thing, but previously they had been group facilities which mobilized the solidarity people feel when faced by common adversity. Kennedy’s program, which was welcomed by the building materials and construction industries, foresaw the fallout shelter as yet another feature of the suburban home… And the family, not the community, became the key unit of survival. This was so clear a reflection of the way in which American society perceived itself at the time that the novelty of the approach was scarcely noticed.

But the part of the fallout shelter that I wish to focus on here, is the well-stocked 1960s pantry. (Click on the photo above for post-apocalyptical product placement of a number of surviving brandname foods: Campbell’s, Lipton, Del Monte, Coca Cola, Spam, etc.)

Better Homes and Gardens… identified a new problem in those trying times. Canned goods left in a fallout shelter for more than a year tend to develop a metallic taste, the magazine said, and there was really nothing that could be done about that. The magazine suggested a system of rotation in which newly bought food would be put in the shelter to replace earlier purchases, which would in turn be rotated up to the kitchen for immediate consumption. Tinny-tasting tomato soup seems among the lesser risks of the nuclear age, but the magazine’s concern with the topic indicates the limited extent to which it thought women would be interested in a public issue and the widespread desire to assume that the world would not be greatly  changed by atomic warfare. Movies and television programs which dealt with the aftermath of nuclear war tended to promise a post-conflagration scene that was clean and pretty, though much less crowded than what went before.

The idea that, with sufficient quantities of packaged foods, we might survive in a less populated world reminded me of something that I had read in another of Hine’s books:

…in a modern retail setting nearly all the selling is done without people. … The supermarket purges sociability, which slows down sales. It allows manufacturers to control the way they present their products to the world. It replaces people with packages.

(One more well-stocked fallout shelter, after the fold…)

Note: Usually it’s my habit to post something every single weekday morning. Yesterday morning I just didn’t have enough time. Not the end of the world, I guess.