I learned about this product in very roundabout way.

While searching for packages designed by Dickens Design Group, I found Adell Crump’s name in the 1971 edition of the Official Gazette of the United States Patent Office.  And not just his name, but a photograph of him leaping in the air with three other people! (See also: Fiona Adam‘s photo of the Beatles jumping)

I knew that Crump was an art director for Dickens Design Group. But how did he, himself, come to be part of a General Mills trademark for a citrus-flavored carbonated beverage? And who were the other members of this Feel Free Fab Four?

The Patent Office Gazette identifies them as Cathy Schuster, Adell Crump, Franklin W. Russert and Knut Simonson. It also declares that their “photographs form part of the trademark” and that “all of whom have given their consent” for this.

I recently spoke with Knut Simonson, who provided us with the photo above showing the cans from both sides. He tells me that the layout and the idea of people jumping were his.

He says the photographs were taken by Jack Lane — (a former advertising executive with Leo Burnett, who “ran a commercial photography business in Chicago for 25 years.”) Simonson recalls a cold day in 1971, when they all went outside to frolic on the banks of Lake Michigan, dressed as if it were much warmer.

He mentioned having mezzotints of the photographs made for the mechanical (rather than halftone screening).

I spoke with Mr. Crump on the phone last month, and he also recalled working on the project. I asked him how he and the others came to be part of the trademark. He explained they had taken the photos with employees just as FPO (for position only) images for the comp. Everyone figured that, if General Mills liked the concept, the photos would then be re-shot with professional models. General Mills liked it so much, however, that their reaction was, like: “Why re-shoot it?”


So management asked them (required them?) to all sign consent forms permitting the client (General Mills) to use their photos as part of the Feel Free trademark. Under those circumstances, of course, you have to wonder whether or not you’d feel free to refuse. (See also: Meg Crane’s Pregnancy Test)

Crump mentioned that he still has one of the printed billboard images folded up somewhere at his house. Simonson still has a number of rare “Feel Free” artifacts and has generously taken some photos for us to show you… 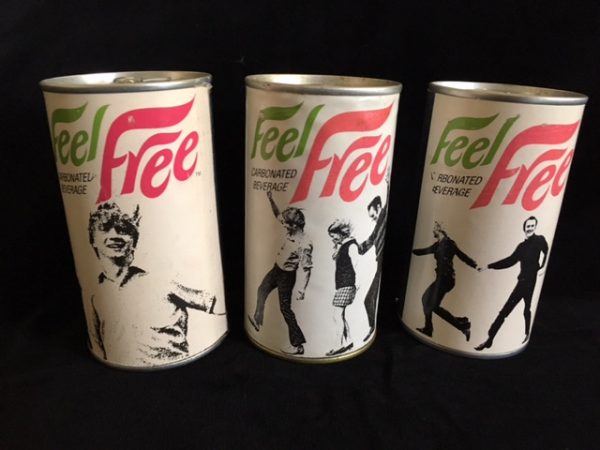 In the dummy comps shown above, Simonson used an alternate version of the logo with a smaller “Feel” and a larger “Free.” Simonson does not claim the hand-lettered logo as his own work. He remembers General Mills requesting a carefree sort of hand lettering for the logo, but does not recall whose lettering it is. Sometimes these things were fairly collaborative, starting out on one designer’s desk, but undergoing further modifications at the desk of another designer. 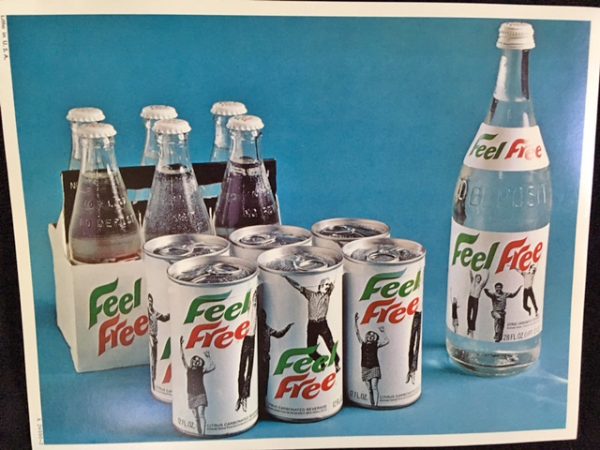 The brand, as it happens, did not survive long on the market, despite a promising product launch in 1971. 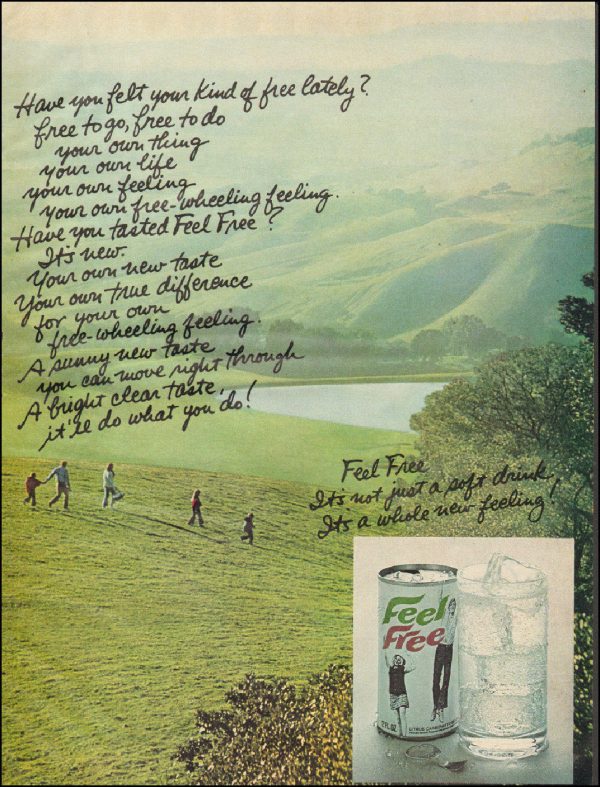 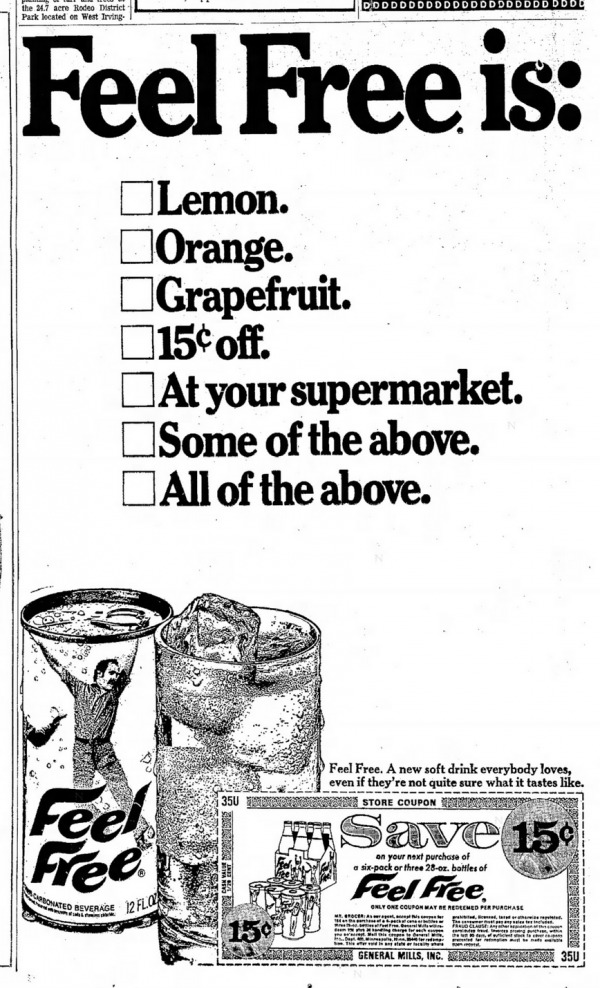 a 1971 Feel Free™ ad published in the Tucson Daily Citizen

This company is entering the carbonated beverage field with a citrus flavoured beverage called, “Feel Free”.

The company tried its first test of a soft drink—Feel Free, a citrus-flavored carbonated beverage. 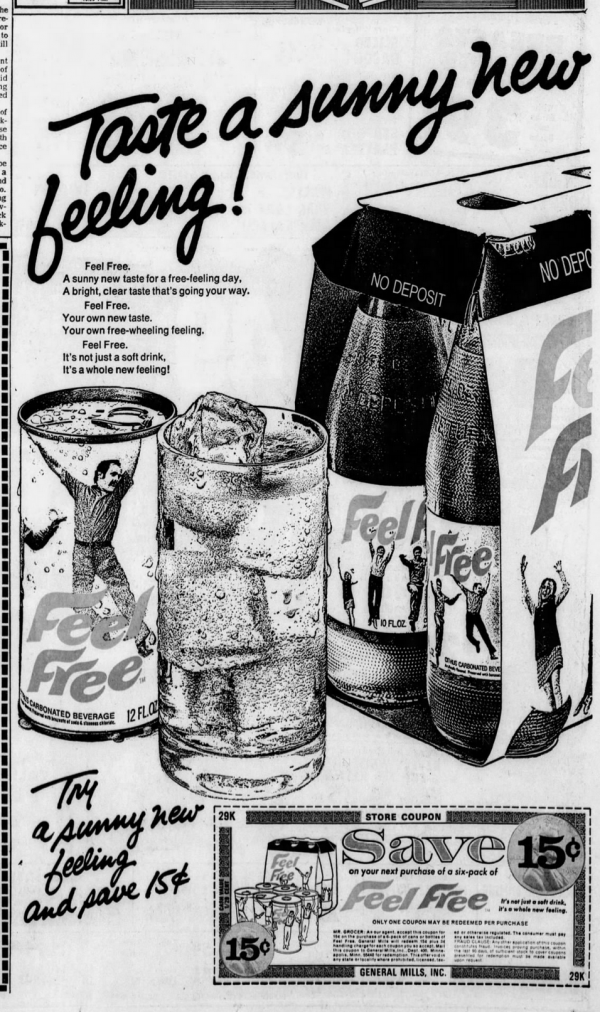 a 1971 Feel Free™ ad published in the Star Gazette 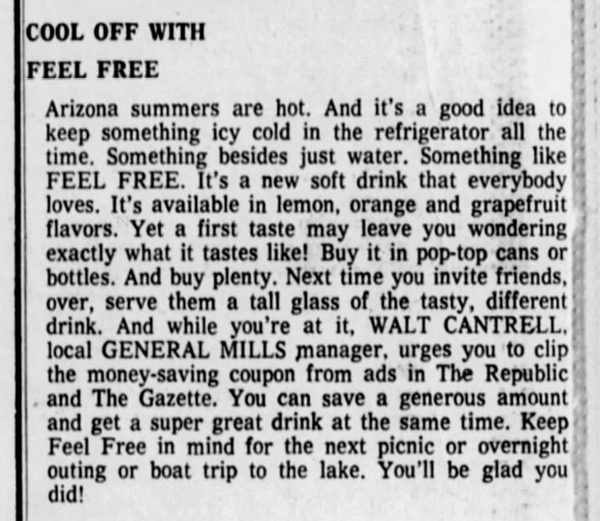 From the Arizona Republic, Aug. 29, 1971: “This information is presented by the General Advertising Department of The Arizona Republic and The Phoenix Gazette as a service for their National Brand Name Advertisers” 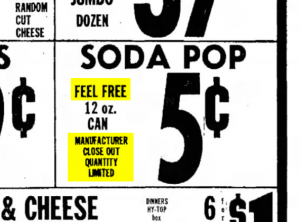 This close-out supermarket ad confirms that, by February of 1972, General Mills had discontinued the brand.

Not too many years ago, General Mills sallied forth with a new soft drink. Psychological studies revealed that its name should connote feeling or emotion rather than taste. The name? “Feel Free.” The market response? It bombed. So, does General Mills (not to mention the ad agency involved) want all that bandied about? No way.

Polk Laffoon, Playing the name game:
A ‘crispy’ by another name would be a ‘crunchy’
Detroit Free Press, June 11, 1978

Feel Free as brand name (or is freedom just another word?) 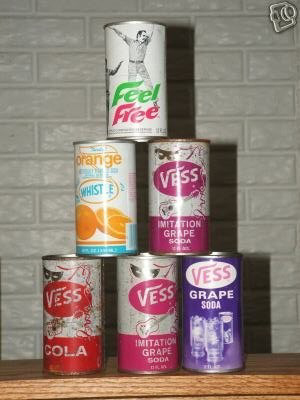 “Feel Free” fits comfortably into the 1970s trend of using a declarative sentence as a brand name. Like Toys “R” Us — another declarative trademark (first registered in 1970) whose future is suddenly in question. Although no one is saying that their name is to blame for their recent bankruptcy.

As a declarative brand name, Feel Free is also an imperative sentence. As such, I like that it’s “you understood.” Consumers understood grammatically that this soda brand was telling them: “you feel free.”

One bad thing about the “Feel Free” name, is that it’s difficult to search for the product online. As a conversational idiom “feel free” is super-prevalent on websites that might offer rare, vintage soda cans. As in: “Feel free to contact me with any questions about my can collection.”

Still, I did manage to find one such image of a vintage Feel Free™ soda can on Worthpoint. Feel Free soda also came in bottles, but I haven’t yet found any surviving examples.

Who’s who in the Feel Free four? 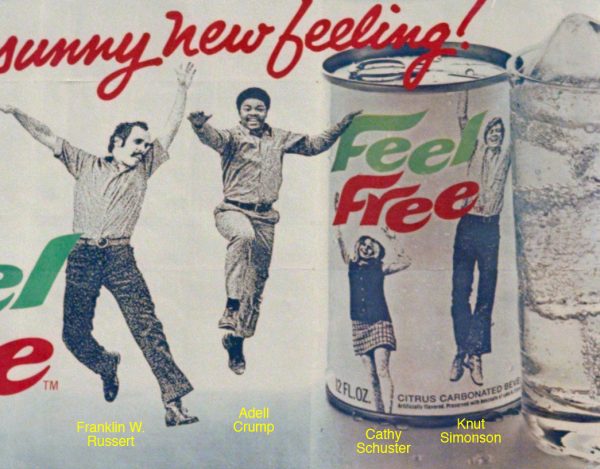 As the only black man and the only woman in the group, Adell Crump and Cathy Schuster were the easiest to identify.

During his 21 year tenure at Dickens Design, Crump served as art director, package designer, VP and Creative Director. We discussed his Twix packaging in a previous post, but he also designed a lot of other interesting packaging during his long career at Dickens. (Stay tuned.)

Crump told me that one of his teachers in college was Lu Dickens—artist, teacher and wife of Robert Lee (“Bob”) Dickens. This eventually led to Crump’s first packaging job at Dickens, Inc. — started while he was actually still in school.

The Dickens Design Group had an unusually active publicity department. We’ve noted before how often Sidney Dickens had appeared in national newspapers. But, at times, the firm also publicized its own design staff.

In addition to his 1971 profile in Ebony Magazine, Crump’s employment at Dickens was also publicized in this 1971 “Teen Scene” column published in the Courier Journal (on right). The Package Design Council appears to have placed the item. Sid Dickens, of course, served as their president around this time.

I tried to learn more about Cathy Schuster’s career, but all I can tell you is that in 1976 she was interviewed by Mademoiselle magazine. You can’t read the entire article online but this quote convinces me that it is, indeed, her: “Cathy fled it, to art school in Chicago and a job with a package design firm.”

Regarding the 2 white men included in the Feel Free™ trademark. How did we figure out which man is Franklin W. Russert and which is Knut Simonson?

Fortunately for us, Simonson’s nephew is font designer, Mark Simonson, who was able to identify the man “with both arms up high” as his uncle, Knut Simonson.

Even better, Mark put us in touch with him!

Now retired, Knut Simonson’s first job in packaging was at Container Corporation of America. The job at Dickens was his second.

As with Crump, the firm publicized his hiring. Simonson says this clipping (on left) is from the Chicago Tribune. (See also: a 1974 press release photo from Dickens of “Miss Amy H. Lui“)

Personally, I’ve been working so long at a tiny firm (BEACH) that I sometime forget how it was (and still is) at larger design firms like Dickens. Multiple designers are assigned the same project to work on in a competitive manner.

It’s not as bad as today’s “crowd sourced” design, where freelancers essentially work “on spec.” At Dickens, even if your design was not chosen, you still got paid. And yet, both Crump and Simonson stressed how important it was to have some of your designs win out. Or you wouldn’t remain employed there for long.

In this way (even though the product ultimately failed) its packaging was a success for Simonson. Robert Lee Dickens sent him the kudos note below. (Dig the embossed Dickens Design Group logo on the stationery!) 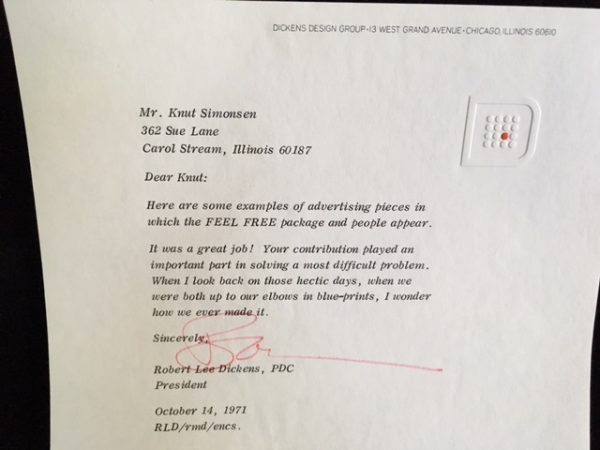 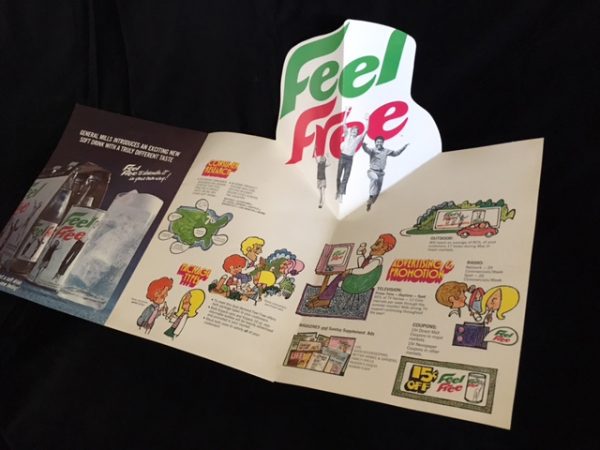 (Simonson also served as a Chapter President of the Institute of Packaging Professionals.)

After identifying Simonson, we were able to deduce (by elimination) that the last man must, therefore be Franklin W. Russert. I wasn’t able to find too much information online about Russert, but, in 1979, he appears to have been a Vice President and Creative Director at Adesign Group, Inc.

Simonson, however, says that Russert and he became close friends while at Dickens and still remain in touch.

Perhaps there’s even more to learn about the short lived Feel Free™ beverage.

I knew that General Mills had made a TV commercial for the product. Did I read about it somewhere online? Or had Crump or Simonson mentioned it to me over the phone? Somehow, I knew about it, but, although I spent some time last fall searching for it online, I could never find the actual commercial.

Then a couple of days ago Geneva Columbus posted the comment below about having a video of the 1971 commercial. She’s now posted it on YouTube which is how we’re able to now include the commercial (above) in our little history of the brand. (Thank you Geneva!)