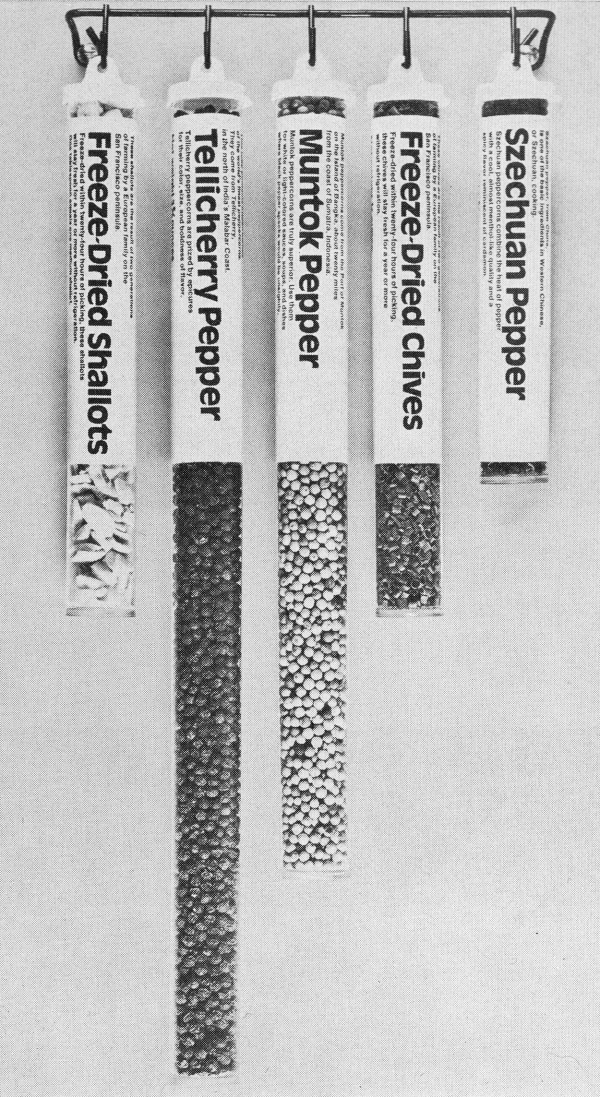 Meg Crane’s 1968 package design for Predictor® pregnancy tests has recently been in the news. But she also designed the packaging for a set of spices in the early 1970s.

Update: I recently had a chance to speak with the designer and she clarified a number of things about the project.

The photo above appeared in Graphis Packaging 3, described there as “transparent containers on a display rack.”  That terse description, however, doesn’t fully describe its most interesting features.

For one thing, the spice containers have caps that enable them to hang from a wire rack.

Flavorbank’s World of Spices are packed in a dynamic, modern style that combines functionalism and merchandising pull. Spices contained in plastic tube that pours easily. Five spices are available and hang on a kitchen wall rack when not in use.

The varying lengths of the tubes, of course, is another interesting feature. When I first saw it, I wondered: did Flavorbank package these differing amounts according to the proportions of each spice that a consumer was apt to use? Ms. Crane has confirmed that this was the case.

I found a 1973 ad in the Galesburg (Illinois) Register, however, and realized that the variable lengths of the spice tubes were also marketed as a consumer option. Stores sold these spices “…by the inch in see-thru tubes with hanging rack if desired.” 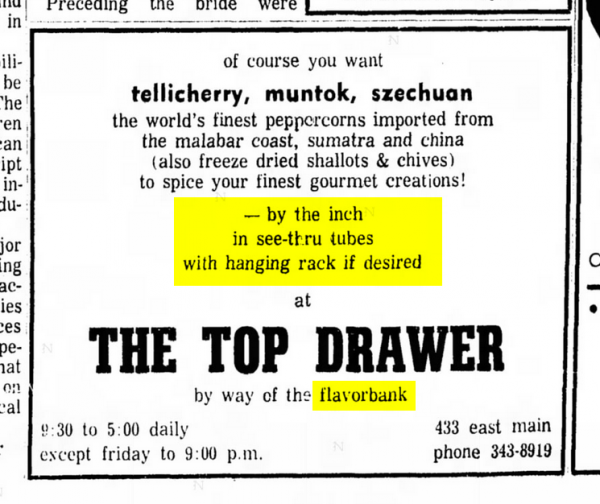 She also told me that when they introduced the product at Bloomingdales on a Friday, by the end of the weekend it had sold out completely.

Despite the early buzz that the product had generated, the partnership between Ponzi & Weill and Flavorbank did not last, partly due to creative differences.

Sadly, Crane’s design seems to have been a high-water mark for Flavorbank’s packaging. The company’s later packaging (after parting ways with Ponzi & Weill) was never as innovative or well-executed.

Although Flavorbank continued using tube shaped containers, they abandoned the hanging caps. They also replaced Crane’s white labels and her straight-forward, sans-serif typography (Antique Olive Bold) with something that they probably thought would be more elegant. Namely: metallic gold labels with the spice names set in a centered, serif font. (Crane has confirmed that, during the short-lived partnership, Flavorbank had been lobbying for golden labels.)

Although the company touted their “Design Award” tubes in the 1987 brochure below, it was actually Crane’s 1973 design that won a “Gold Award” from the Art Directors Club. These pseudo-elegant ‘improvements’ certainly never won Flavorbank any awards. 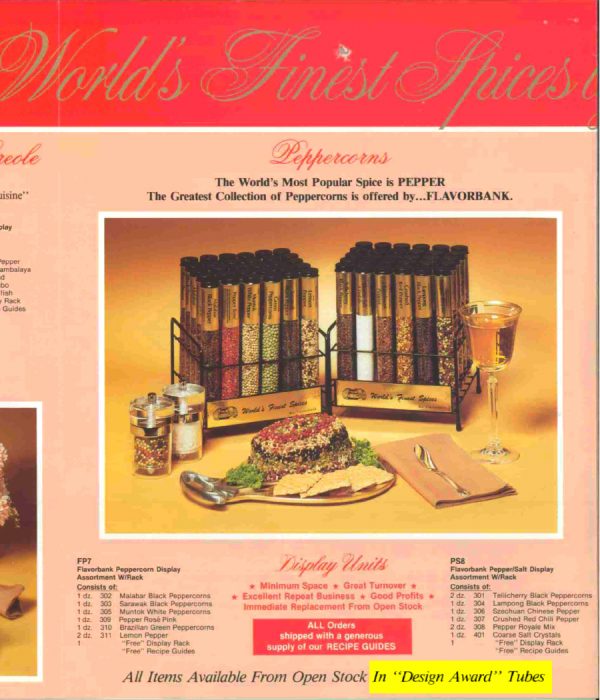 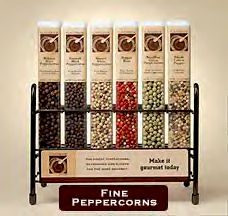 Later, the cylindrical tubes were made rectangular…

When she inherited the company, Brooks began a “major facelift” of Flavorbank. “This April, we changed the logo, packaging and marketing materials to differentiate it from competitors and to communicate the company’s contemporary and stylish image. We basically breathed new life into the line,” she said. “It’s a new look but with the same promise of quality.”

But whatever their claims, the company’s packaging never regained the modern simplicity of Crane’s original design.

Once on the verge of financial collapse, Flavorbank rose from humble beginnings as a New York store selling spices, salts, sugars and syrup.

The company was started in 1969 by Warren Ansley, whose family operated Flavorbank for more than 35 years.

The company flourished with multimillion-dollar sales as consumer demand for gourmet foods rose around the country.

At its pinnacle, the company made special blends for celebrity chef Emeril Lagasse, whose line of spices accounted for about 80 percent of Flavorbank’s annual sales.

Things changed, however, in 2000 when the company lost Lagasse’s business to a competitor and annual sales plunged from more than $1 million to $300,000, according to Star archives.

Her daughter, Jackie Brooks, inherited the company and kept it going for a few years before filing for protection in bankruptcy court in 2005.

Despite its finances, [Jenifer] English, an investor with the company, wanted to take it over and in August the courts approved her reorganization plan and awarded her Flavorbank’s assets and debts.

I’m not sure what went wrong, but Flavorbank’s website went dark in 2014.