From The Leo Burnett Company’s 1955 “Tattooed Man” campaign for Marlboro cigarettes: guy tinkering with his car—one of the plain-spoken, cigarette smokers whose rugged good looks and masculine demeanor helped Marlboro overcome its earlier feminine incarnation. (…as a brand that offered a red “beauty tip” filter… so your lipstick wouldn’t show!)

I like how, in citing his reasons for smoking Marlboro, this guy mentions the design of the box and even manages to makes package design seem like a fairly rugged occupation:

“… then there’s this flip-top box. I like things that are well designed. This box is interesting and practical.”

(More about Marlboro’s hyper-masculine ad campaign, after the fold…) 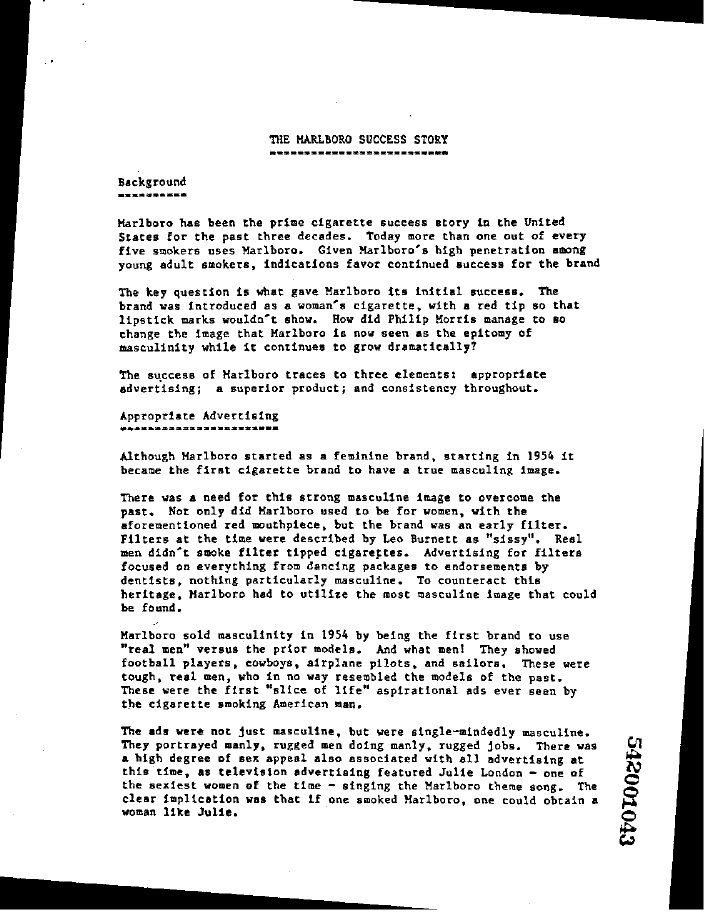 From Tobacco Documents Online: page 1 of “The Marlboro Success Story,” a 1985 marketing report made available online as a result of the Master Settlement Agreement

From the document above:

Although Marlboro started as a feminine brand, starting in 1954 it became the first cigarette brand to have a true masculine image.

There was a need for this strong masculine image to overcome the past. Not only did Marlboro used to be for women, with the aforementioned red mouthpiece, but the brand was an early filter. Filters at the time were described by Leo Burnett as “sissy”. Real men didn’t smoke filter tipped cigarettes. Advertising for filters focused on everything from dancing packages to endorsements by dentists, nothing particularly masculine to counteract this heritage. Marlboro had to utilize the most masculine image that could be found. Marlboro sold masculinity in 1954 by being the first brand to use “real men” versus the prior models. And what men! They showed football players, cowboys, airplane pilots, and sailors. These were tough, real men, who in no way resembled the models of the past. These were the first “slice of life” aspirational ads ever seen by the cigarette smoking American man.

Manly, rugged jobs like, say: the design of interesting and practical packages?