Up until around 10th grade, I used to live in various parts of Florida. I therefore grew up with the story of Ponce De Leon and his futile quest for the Fountain of Youth. So when I saw this bottle of “Florida Water” (on the shelf at my local Rite Aid pharmacy), its references to Spanish explorers & Floridian history seemed vaguely familiar.

As I recall, most of the naturally-occurring water sources that I tasted while living in Florida, tasted like sulfur-water and—(judging by my current, non-youthful appearance)—those waters (apparently) must not have been the fountain of youth. Not that you’re supposed to drink this type of “Florida Water” I don’t think. [1] Although it does have an appetizingly citrus-like smell…

According to the company’s web site, the label was designed “by the famous French Designer, Du Maurier” and introduced to America in 1808.

The French designer they’re referring to, is actually George Du Maurier, French-born British author and cartoonist. Best known, perhaps, for writing Trilby, the novel that introduced the character, Svengali to the world. “Trilby” was the heroine of the story—the one who Svengali [2] hypnotizes and manipulates. The book was so wildly popular during Victorian times that a number of products were named after its heroine. Everything from brands of soap & toothpaste to trilby hats. There is even a town named Trilby in Florida [3]—(Trilby, Florida is a little to the west of Orlando). 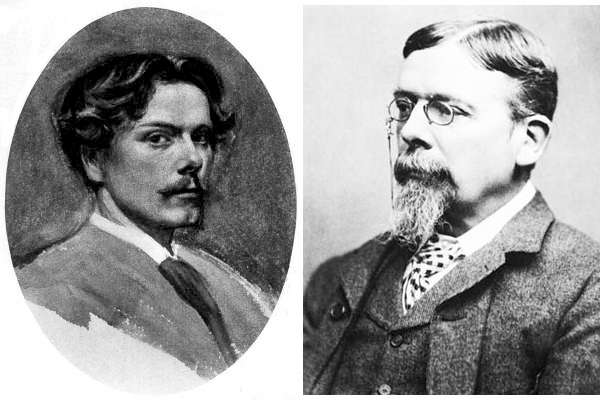 Du Maurier’s self-portrait on left as a young man and in a photo a little while later, proving that for Du Maurier—(as with Ponce de Leon & me)—Florida Water turned out to be no fountain of youth.

Aside from Du Maurier’s “Florida Water” label which has been in use since 1808, he was also known to have created the artwork for at least one bottled water that you are actually supposed to drink.

(More pictures, after the jump…)

According to a 1909 issue of the magazine, The Bookman, for all of his cartoons and illustrations in Punch…

…the most widely circulated drawing of the late George Du Maurier … is the picture of the bubbling spring to be found on the label of every bottle of Apollinaris water. There is a rather odd little story about how Mr. Du Maurier came to make it. Mr George Smith…was…the principal stockholder of the Apollinaris Company. He and the author of Trilby were old and intimate friends, and when the mineral water was first launched upon the market Mr. Smith was in doubt as to a design for the label, and mentioned the matter to Mr. Du Maurier, who at once offered to draw something…

A friend once asked Mr. Du Maurier how he came to do something so undignified.

“I would do anything for George Smith,” replied the artist.

The Bookman
An Illustrated Magazine of Literature and Life, Volume XXIX, March 1909–August 1909

The unusually tall and slender bottle of “Florida water” that I purchased at Rite Aid is embossed vinyl meant to resemble the original glass bottle. According to Packaging Digest, this new bottle came to pass in 2004:

“One of the nation's venerable brands, Murray & Lanman Florida Water cologne, is revivified in vinyl. The 192-year-old brand's new 7 1/2-OZ bottle for New York City-based Lanman & Kemp-Barclay is extrusion blow molded by Progressive Plastics in a proprietary shape that mimes the original long-neck in glass and maintains the original label graphics for continuity in the consumer's mind.”

from Venerable in Vinyl
(New Packaging for Murray and Lanman Florida Water Cologne)
Packaging Digest,  May, 2000 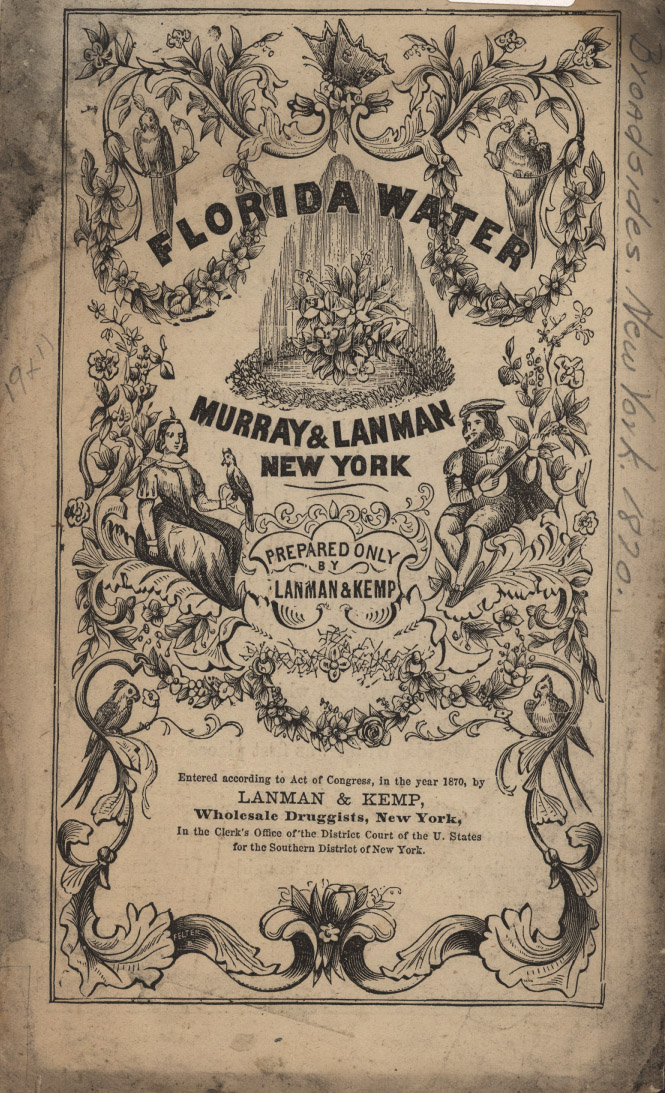 .
This early advertising broadside from 1870 is signed by engraver, John
D. Felter. Presumably done as a reproduction of the Du Maurier original? 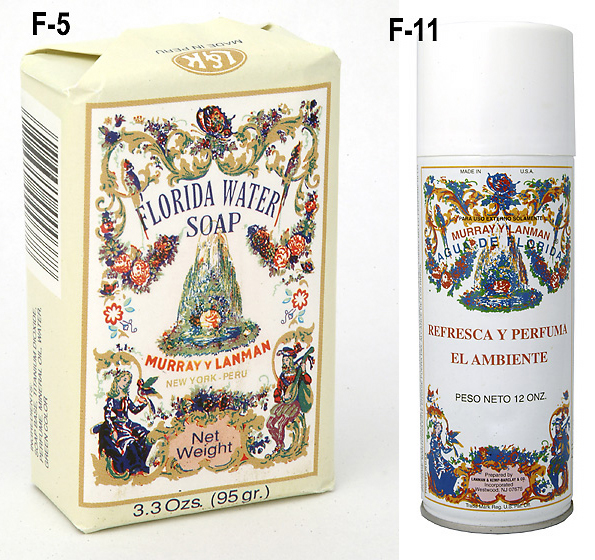 But I see on the Murray & Lanman web site, that Florida water is also still available in glass bottles, which I’m guessing ought to make for better “hoodoo”. (See footnoted digressions below.)

1  An early childhood memory of mine concerning water in Florida: two water fountains with “white” and “colored” signs at the Sarasota courthouse. The “white” fountain was the tall metal kind that cooled the water. The “colored” fountain was porcelain with room-temperature water, but easier for me to reach.

Although “Florida Water Cologne” is not as popular as it may have once been, according to Catherine Yronwode’s Lucky Mojo site, it is widely used in African-American “Hoodo” rituals “…of home protection and spiritual cleaning, to scent bowls of water set out for the spirits of the dead, as a basis for making an ink-dyed scrying water, and for other ritual and cosmetic purposes among people of African-diaspora descent in the United States and the Caribbean.” (from Hoodoo In Theory and Practice)

Municipal water in Sarasota was also fluoridated—which I was taught: a) prevented cavities and was a good thing and b) that there was a crazy, right-wing group called The John Birch Society that thought fluoridated water was a bad thing.

2  Must be acknowledged: Svengali (like Fagin in Oliver Twist) is one of those (negatively stereotyped) Jewish villains of the day.

“The artist seems to share many of the prejudices of the older aristocrats. He makes his Jews too Jewish. He believes that they produce great artists, and as if this wasn't enough, he still holds them at arm's length.”

And, as long as we’re on the subject of antisemitism, the german-based Apollinaris company, (label artwork by Du Maurier) later came to be under the control of the Nazi SS-Wirtschafts-Verwaltungshauptamt (the Economics and Administrative Department of the SS) from the mid-1930s until 1945.

3  See Richard Riley’s page about the history of Trilby, Florida. Including an advertising pamphlet for Bromo Seltzer with a long poem about Trilby & Svengali and, since my research began with a visit to the pharmacy, here is a sample couplet:

Had she spurned Svengali’s offer
When her headache made her sick,
And just taken Bromo-Seltzer,
‘Twould have cured her just as quick.

“Headaches, due to excitement or nervousness are usually relieved by simply applying cooling and refreshing Murray & Lanman's Florida Water to the temples and forehead.”