These bottles, both based on hand grenades, have been around for a while. Seems to me, with packaging like this, that the concept is largely metaphorical — as if to say, these products are “bursting” with explosions of goodness. (floral fragrance, fruit flavor, etc.)

Interestingly, the word “grenade,” itself, has a fruity etymology. Based on the French word “Pomme-grenade” for pomegranate, this type of hand grenade was also called a “pineapple grenade” during World War II.

I doubt that these two companies truly want to be associated with war and weaponry. Culturally, we like to watch things blow up and we have a fetish for dangerous objects like hand grenades. Simultaneously militaristic and radical-chic. Not sure if consumers are more inclined or less inclined to accept this during wartime. The human toll of explosive devices (improvised and otherwise) might strain our patience for this particular analogy.

(More photos & more about hand grenade packaging after the jump)

Flowerbomb
The case could be made that “Flowerbomb” reflects an anti-war sensibility like the famous “flower power” photo of a hippie putting a flower into the barrel of a National Guardsman’s gun. An explosion of flowers might sound hippie-like, but with it’s hand-grenade-shaped bottle, Flowerbomb is having it’s cake and eating too. 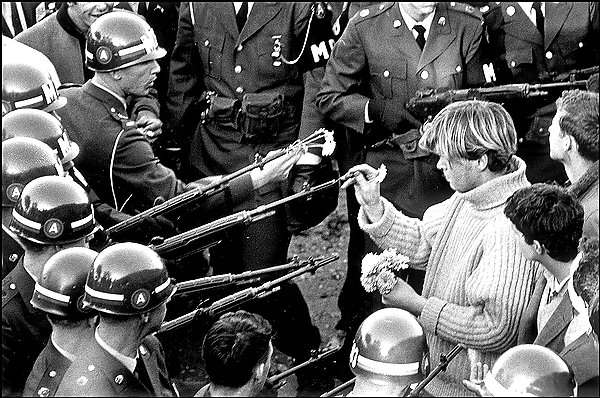 Bomba
On the Bomba web site they discuss their hand grenade-shaped bottle:

Great success for BOMBA. Our “explosive” bottle was highly praised at the “Shine Award 2001” in the category INTERNATIONAL.

During this British contest, prizes are awarded for the most outstanding design for glass containers in five different categories. BOMBA was in good company, featured with brand names such as Ballantine’s, Beefeater, Pepsi, Nescafé and Southern Comfort.

Judges’ comments:
This quirky pack takes a completely different approach to the energy drinks market. The grenade shape and ring-pull echo the brand name and the explosive energy that the user will supposedly benefit from.