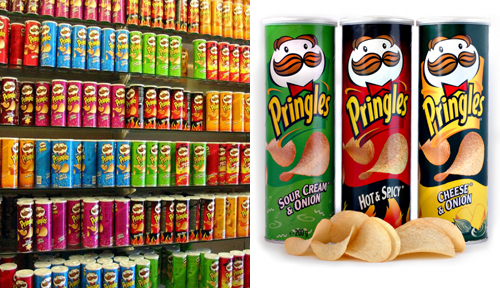 I first heard this story yesterday via the How Magazine blog.

Frederic J. Baur, the designer/inventor of the tube shaped Pringles package recently died and, to honor his wishes, his children buried him in the container he invented. (i.e. put some, but not all, of his ashes in a Pringles can.)

Since then I’m noticing the “Buried-in-a-Pringles-Can” story quite a few other places. I guess you’d say it was “viral.” (And here I am, jumping on the band wagon.)

Not surprisingly, the majority of the blog pieces you’ll find play this for laughs with a lot of Pringles-related puns.

One blog mocked the idea that creating the Pringles container was Fred Baur’s “proudest achievement”—but it isn’t like that blog’s writer has, himself, discovered a cure for cancer or anything.

Time magazine’s Jeremy Caplan did a more thoughtful piece. Dr. Baur died of Alzheimer’s. His children stopped at a Walgreen’s on the way to the funeral home. Time quotes Dr. Baur’s son, Larry. “My siblings and I briefly debated what flavor to use," Baur says, "but I said, ‘Look, we need to use the original.” Time also included a brief appreciation of the ground-breaking nature of Dr. Baur’s contribution and it’s influence on subsequent packaging innovations.

My take on the story is that packaging is a just another part of our
lives. I don’t think people are really aware of how much of a role
packages play in their own daily existence.

Philosophically, I think it’s important to keep in mind that a retail package is still just an object in the real world. You can do with it what you will. One thing that does bother me: nowhere could I find a photo of Frederic J. Baur. Normally an obituary would show a photo of the person, rather than the urn that contained their ashes.