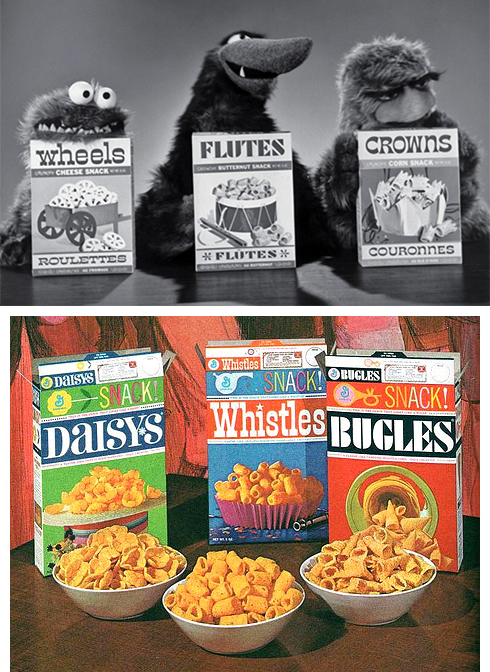 These boxes were designed for General Mills by S. Neil Fujita. According to Graphis Packaging 2, their “Colours and lettering convey an atmosphere of gaiety.”

The idea of a simultaneously  promoting three different, but related products as a trio, however, was something that General Mills had apparently been working to develop for some time. The company registered patents and trademarks for a variety of snack shapes and metaphorical names, not all of which made the final cut.

Wheels, Flutes and Crowns were another such trio of snacks. In 1966 General Mills Canada hired Jim Henson to make a “test pilot commercial” advertising the three snacks as a group.

His commercial shows a bilingual package design, and (as with the package design for Daisy’s, Whistles and Bugles) each product here gets its own distinctive typography, but follows a matching layout and illustration style. Did Fujuta design these three prop boxes as well? (Don’t know.)

Some sources online suggest that Wheels, Flutes and Crowns were actually manufactured and sold in Canada, but I’m not so sure. (I’ve never seen any other photos of these products anywhere else.) I think what happened was that General Mills was considering releasing another trio of snacks, but ultimately decided against it.

The idea of a product trio is interesting to me. The snack pack trio is like a small nuclear family of products. “Three” is probably the perfect number of varieties—easily understood and differentiated. Perhaps, more intriguing to consumers than one product alone. Try all three! The only downside is that, like siblings, they inevitably compete with each other. Any sibling rivalry between Daisy’s, Whistles and Bugles, of course, was settled long ago. (Bugles won.)

Whistles and Bugles commercials, after the fold…