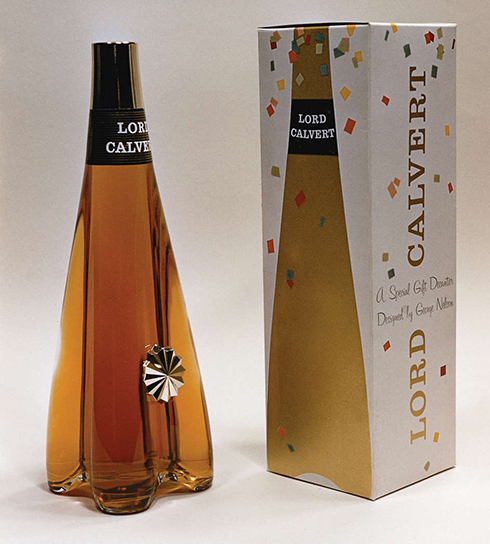 To add to the potential for confusing George Nelson with similarly named George P. Nelson, is the fact that George Nelson was also known to design an occasional package.

It’s hard not to be envious of those early halcyon years when designers like George Nelson, Raymond Lowey or Donald Deskey were as apt to be hired for the design of a sofa or a street light as a packaging carton. The age of  specialization (if that’s what you call what we’re in now) changed all that.

Also jealous of: the celebrity status that some designers apparently enjoyed in those days. How often do you see packages (like the carton above) that credit the designer as if it were an important product feature?

For the first time, Calvert Reserve (second best-selling whisky) and Lord Calvert will come out in special decanters this fall. Calvert, competing with some really attractive decanters, did it big, hired topflight designers Russel Wright and George Nelson to do the designing. Their decanters will take no more shelf space than the average whisky bottle. Calvert’s move means that decanters will now be a permanent fixture for the Christmas selling season. The trend, though, will be to clean design, not the rococo style of past years.

Tide (The Newsmagazine for Advertising Executives) 1955 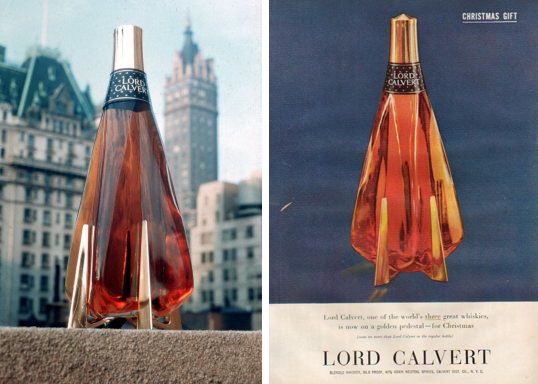 A similar bottle was later offered with a “golden pedestal.”