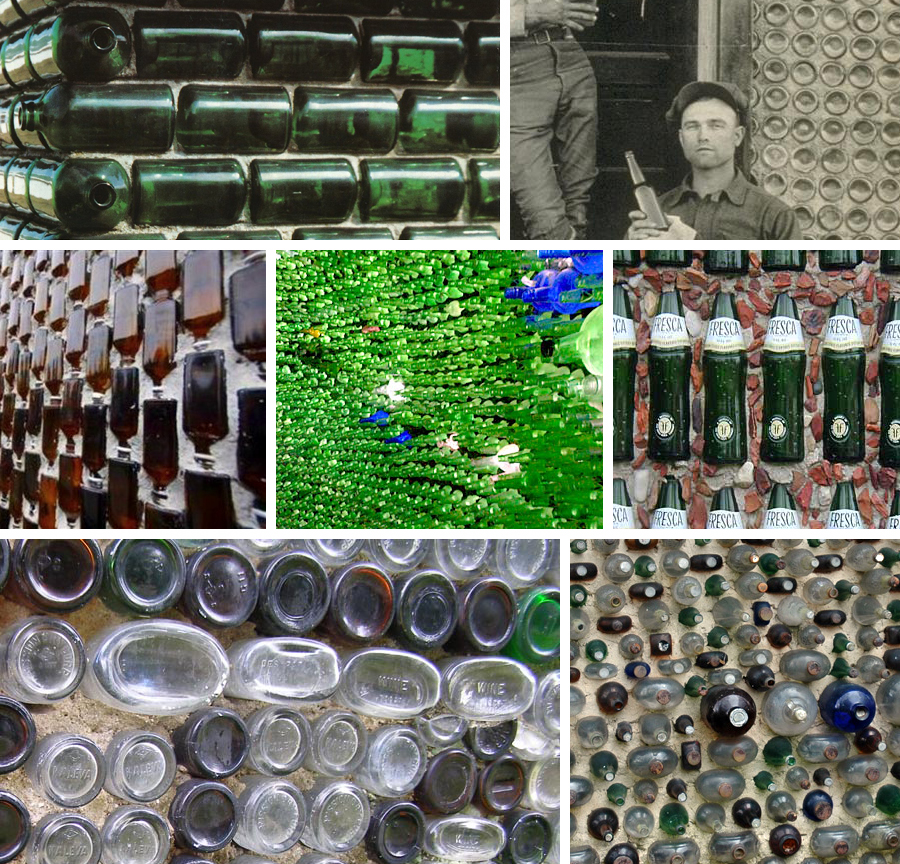 In addition to bottle-shaped roadside attractions, there are also a large number of buildings actually made out of bottles. Employing “bottle wall construction,” many have sought to build homes with bottles instead of bricks.

The use of empty vessels in construction dates back at least to ancient Rome, where many structures used empty amphorae embedded in concrete. This was not done for aesthetic reasons, but to lighten the load of upper levels of structures, and also to reduce concrete usage. This technique was used for example in the Circus of Maxentius.

In (relatively) more recent times, there have been a variety of motivations for using bottles instead of bricks. These structures run the gamut from cabins built in the early 1900s (in areas like death valley where empty bottles were more plentiful than lumber)—to eccentric homemade “follies” (often evolving into roadside attractions, in their own right.)

There are too many brands of bottle houses to list them all, but here are eight: 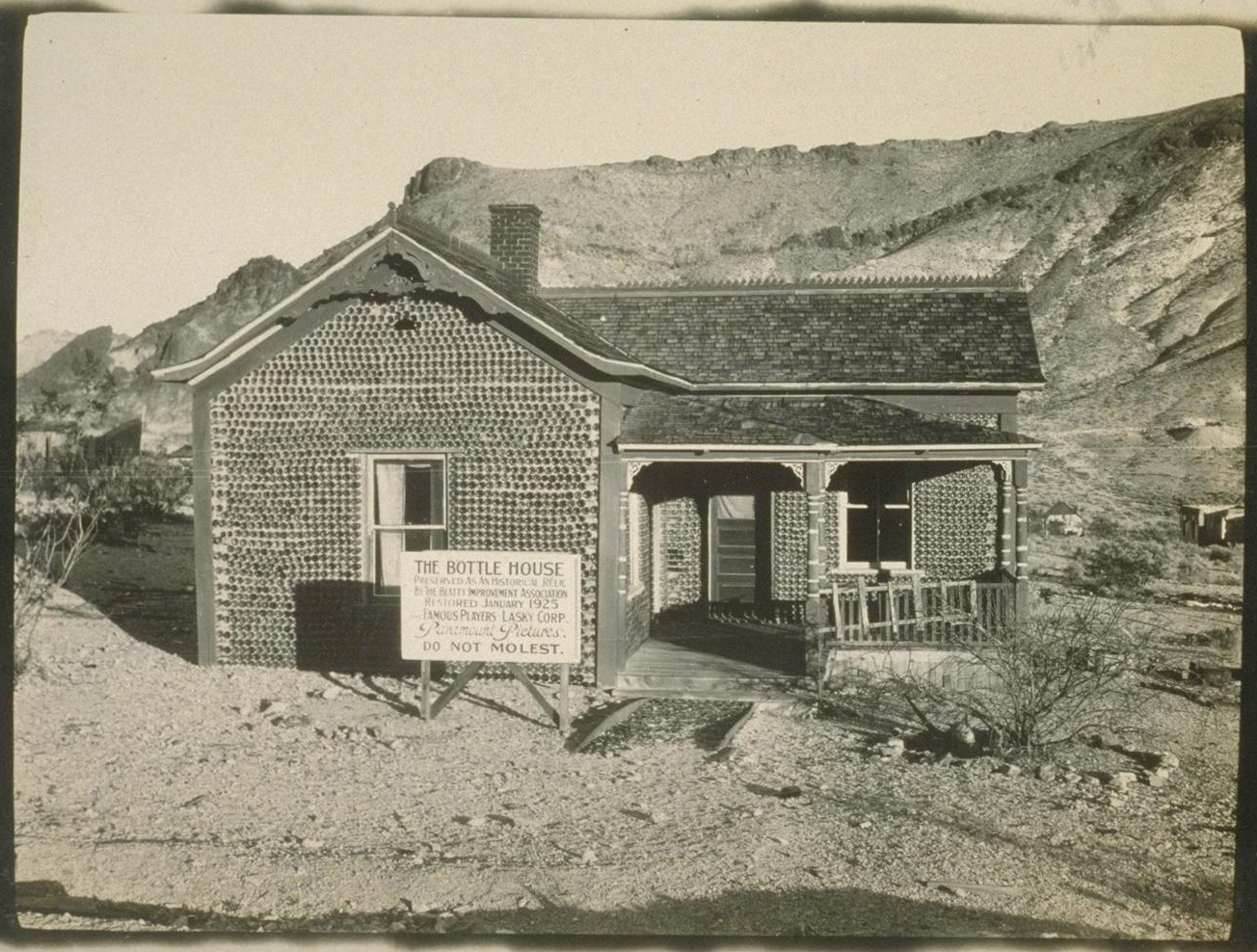 “Bottles were free and many of them. Other building materials were scarce. There were about 30 or more Saloons in Rhyolite”Death Valley automobile trip, 1926 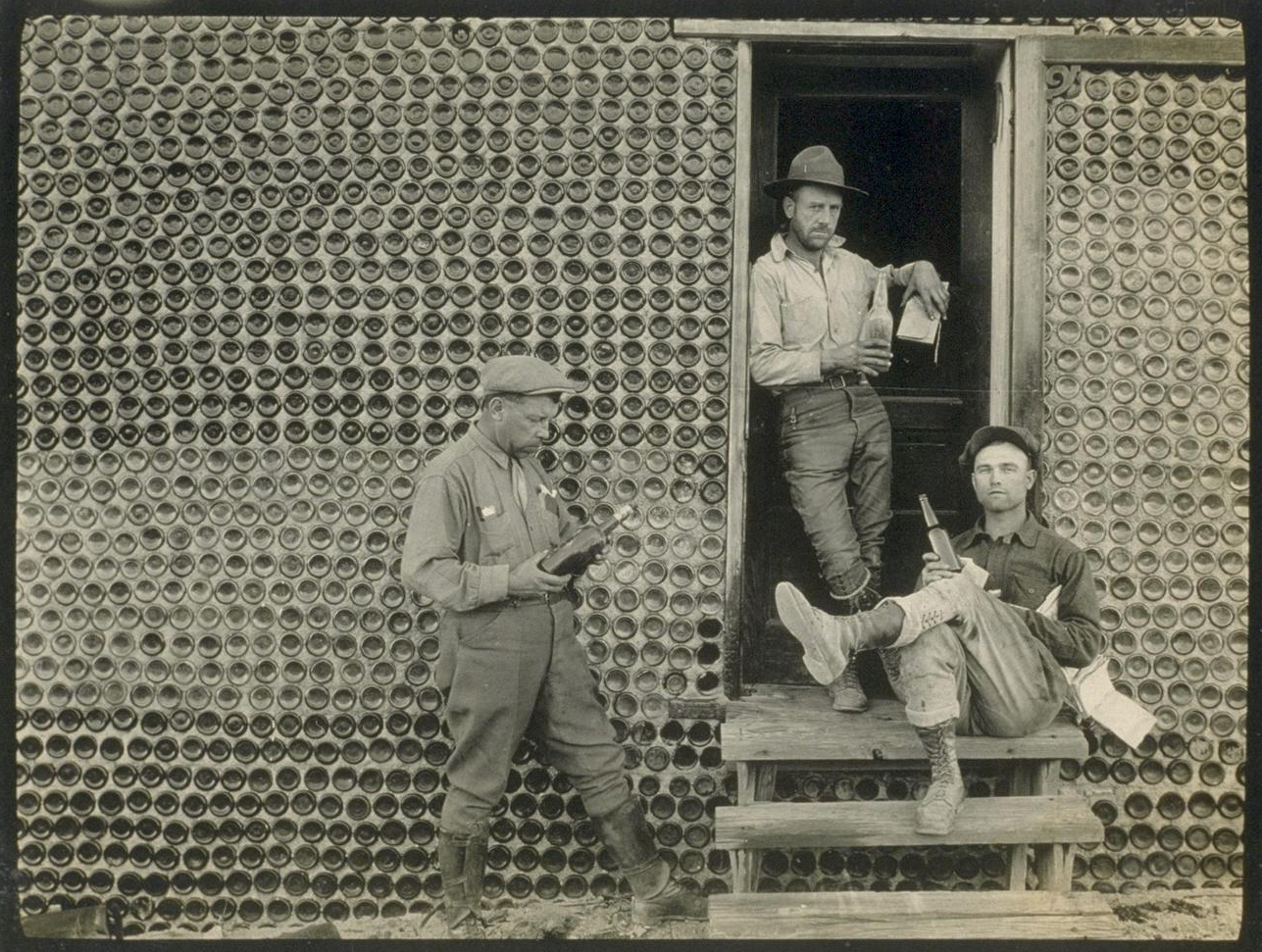 The back porch of the Rhyolite Bottle House. (archival photo from 1926, The Bancroft Library. University of California, Berkeley) 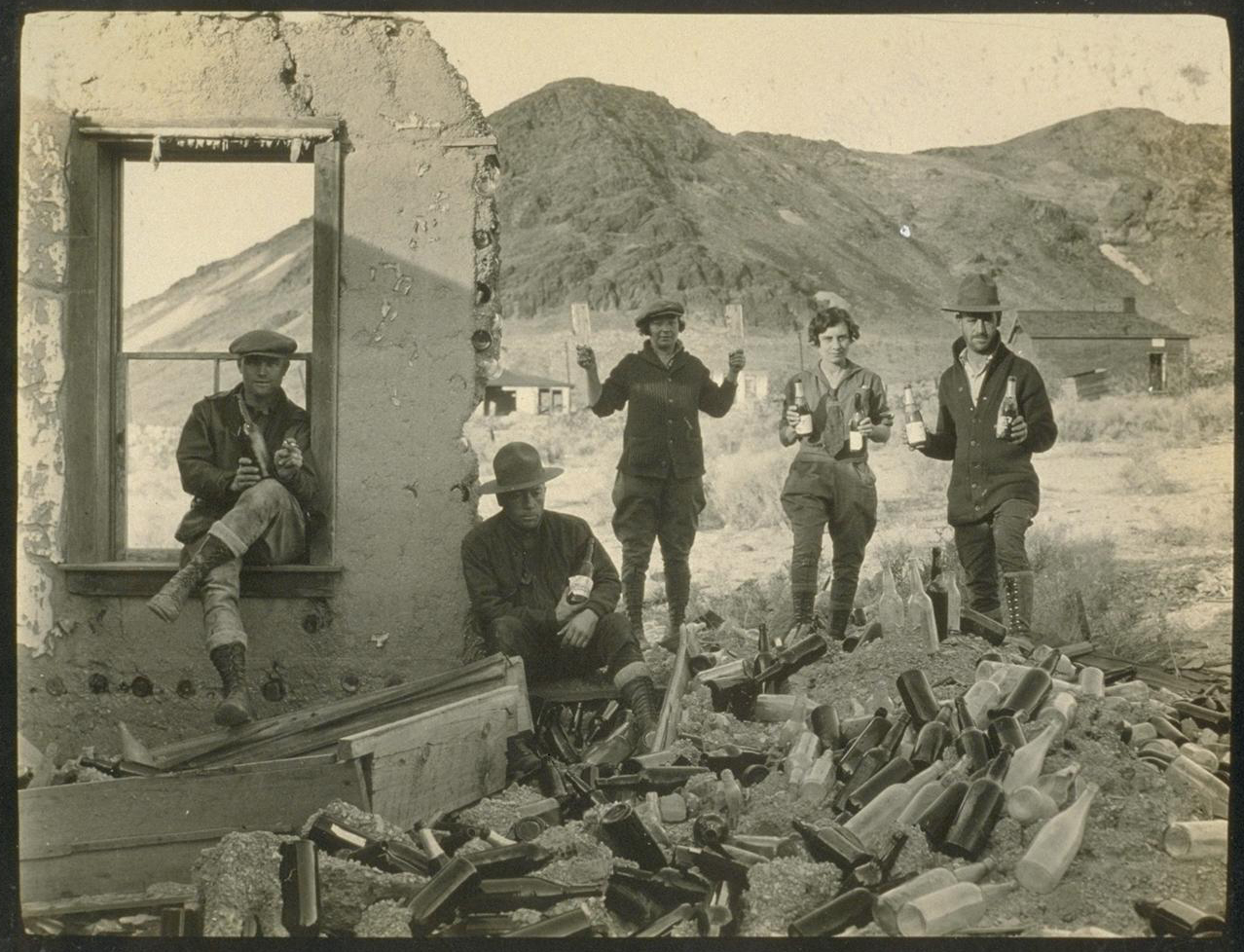 Another Death Valley bottle house that did not fare so well. (archival photo from 1926, The Bancroft Library. University of California, Berkeley)

The bottle house in Kaleva, Michigan was built by John J. Makinen, Sr. in 1941.

Makinen… owned and operated the Northwestern Bottling Works Company in Kaleva. He died just before he and his family were to move into the new bottle house.Most of the bottles came from his bottling plant as the bottom of the bottles reveal. There is a large variety of bottles that were used for many products, including drinks, wine, beer, and liqueur. The bottles were not only round, but oblong in shape as well. The bottles are arranged with clear bottles and brown color bottles on the front of the house to spell “HAPPY HOME.”from Wikipedia entry on: John J. Makinen Bottle House 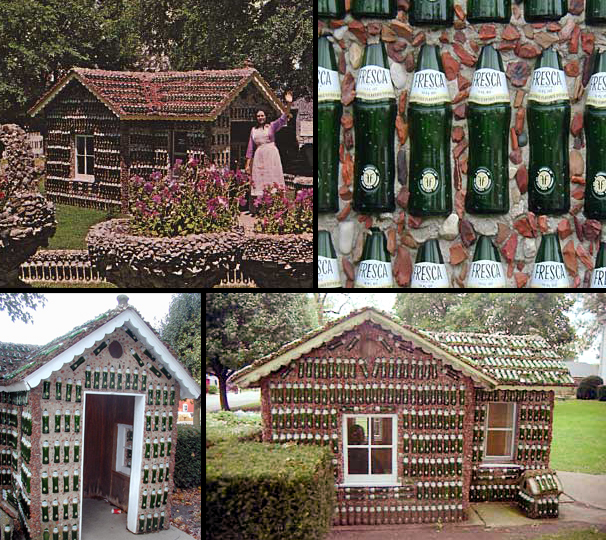 Rockome is an Amish theme park in Arcola, Illinois which used to feature several bottle playhouses conceived as tourist attractions.

The structure of these houses did not depend on the bottles. In fact, they appear to have been stuccoed plywood houses with a decorative layer of matching bottles—(7-Up for one house; Fresca for another).

For a place seeking to capitalize on things-Amish, it seems an odd choice to have decorated these play houses with mass-produced consumer packaging. For American tourists during the fifties and sixties, however, the bottle houses proved a popular attraction. In any event, the bottle houses were dismantled in 2006.

Read more about Rockome here, here and here. (And if you’d like to buy the place, it appears to be for sale.) 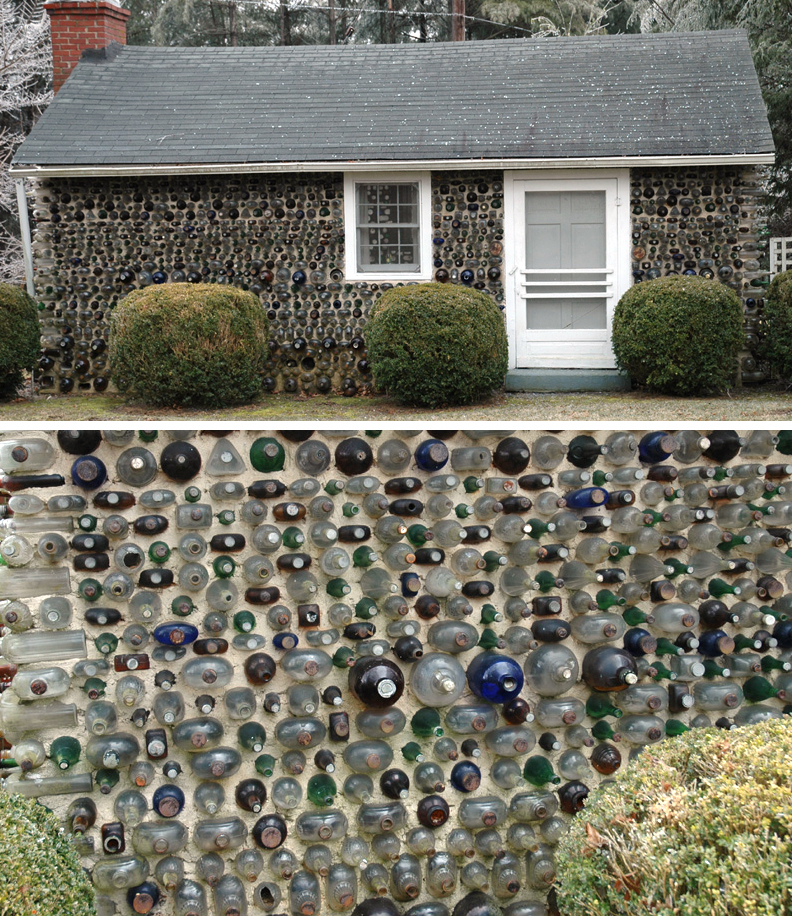 Photos above by Debra Jane Seltzer

In 1941, Friel Dalton built this bottle house in Hillsville, VA for John Hope, a pharmacist nicknamed “Doc”. It was built as a playhouse for Hope’s daughter. It took about three months to build with Friel working 8-10 hours per day. The bottles came from all over including medicine bottles from Hope’s store and wine bottles from a local restaurantUnlike other bottle houses, the bottles point outward so that the inner walls are flush. Green bottles form an “H” pattern (for Hope) on one of the side walls. There is also a blue bottle chandelier. The local townspeople called the bottle house “The House of a Thousand Headaches” referring to the number of wine bottles used in its construction. 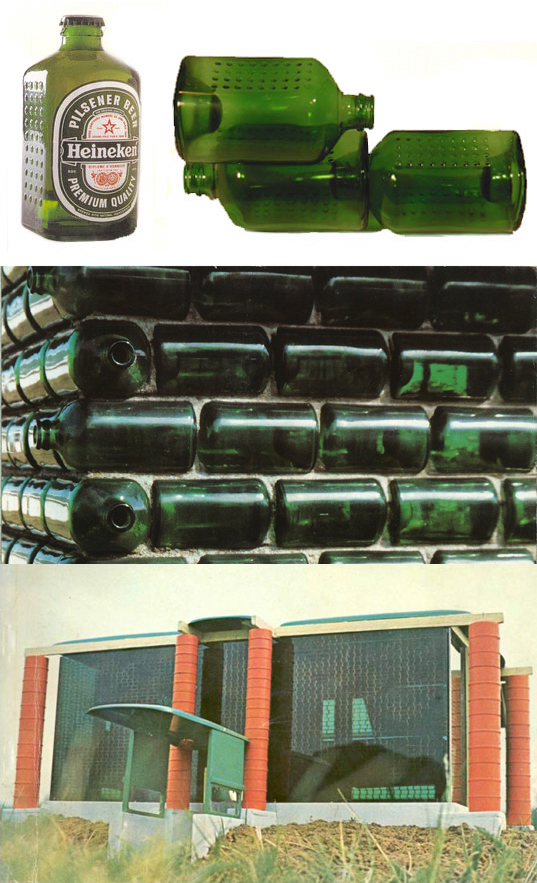 On at least one occasion, a bottle was designed to later serve as a glass brick.  Excerpted from Inhabit.com “HEINEKEN WOBO: The brick that holds beer,” by Ali Kriscenski:

…the idea of turning waste into useful products came to life brilliantly in 1963 with the Heineken WOBO (world bottle). Envisioned by beer brewer Alfred Heineken and designed by Dutch architect John Habraken, the “brick that holds beer”…Mr. Heineken’s idea came after a visit to the Caribbean where he saw two problems: beaches littered with bottles and a lack of affordable building materials. The WOBO became his vision to solve both the recycling and housing challenges that he had witnessed on the islandsThe final WOBO design came in two sizes—350 and 500 mm versions that were meant to lay horizontally, interlock and layout in the same manner as ‘brick and mortar’ construction. One production run in 1963 yielded 100,000 bottles some of which were used to build a small shed on Mr. Heineken’s estate in Noordwijk, Netherlands…Despite the success of the first “world bottle” project, the Heineken brewery didn’t support the WOBO and the idea stalled…

Photos above by Debra Jane Seltzer 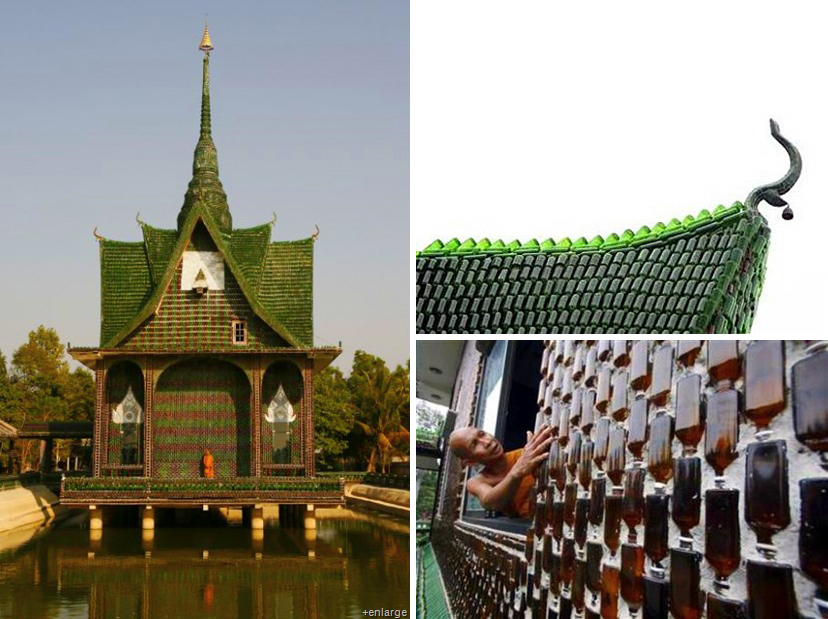 Built by Buddhist monks from Thailand’s Sisaket province. Read more about it here and here.

Artist, Charles Stagg’s home/studio in Vidor, Texas was begun in the 1960s, but work on at has continued for 40 years—despite setbacks like a fire in 2006. (Read about him here and here.)

1. In researching this subject I have (again) made liberal use of photographer, Debra Jane Seltzer’s research and photos of bottle houses. (See: “Agility Nut”)

2. Another good source for bottle house information (and some amazing photos) is Tom Krepcio’s blog about stained glass, here.