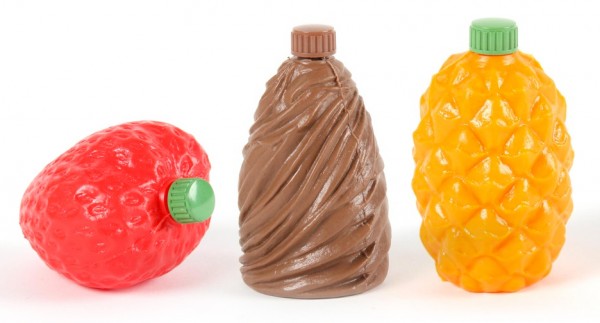 These bottles are from The Museum of Design in Plastics (MODiP): just three of an intriguing collection of figural, blow-molded, fruit-shaped plastic bottles attributed to the “HAX London” and “FLIP London” brands and loosely dated: 1950 – 1969.

Trying to find other examples online of HAX London or FLIP London bottles proved so difficult that I began to doubt whether such products were really ever on the market. 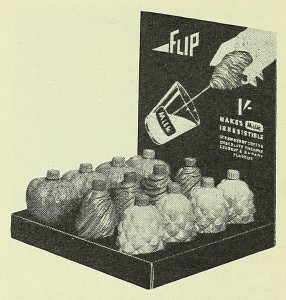 In matters of urgent packaging ephemera, however, we at box vox tend to just keep on digging. (Some say that we are compulsive in this regard.)

But it was due to exactly this sort of tireless perseverance, that we were able to unearth so much more about the HAX and FLIP brands.

As we learned in yesterday’s post, HAX was a brand launched in the 1930s by Edward Hack, who (in the 1950s) played a key role in the design of a lemon-shaped plastic container for his HAX lemon juice. It was his container which ultimately became the well-know Jif plastic lemon.

The black and white photo on the right shows a display carton containing these same 3 bottles from MODiP’s collection, shown above.  The display carton picture was found in a 1957 issue of The Chemist and Druggist magazine with this accompanying text:

Milk Made Irresistible. — A new series of flavours for milk, cereals, sandwiches, cakes, pancakes, spreads, jellies, blanc manges, custards and ice  cream is being marketed in hygienic polythene easy-squeeze shapes, by Flip, Ltd., Lion House, Red Lion Street, London, W.C.I. Issued in three varieties (strawberry, pineapple and chocolate), the Flip flavours are sent out 1 doz. of each flavour in polythene bag. Three bags are the complement of each ” outer.”

Hack had obtained a British trade mark for “FLIP” as a brand name in 1956. Was this his second act after selling “Jif” his rights to the HAX lemon pack?

Funny how the “FLIP” logo uses the same triangle and typography as the “HAX” logo. Clearly, Hack was behind both HAX and FLIP brands, but MODiP’s website lists the designer and manufacturer of these packs as “unknown.”

Based on our research into Edward Hack, can we possibly deduce who designed and manufactured these bottles?  Yes, I believe that we can. (after the fold…)

As with the HAX lemon, Edward Hack sought to patent these bottles. I found a Canadian patent for the Strawberry shaped bottle and American patents for the pineapple and chocolate “whirl” shaped bottles. There were also other colors of “whirl” bottle probably made from the same mold. (Note: in 1956 Hack filed a trademark application for the word “whirl.”) 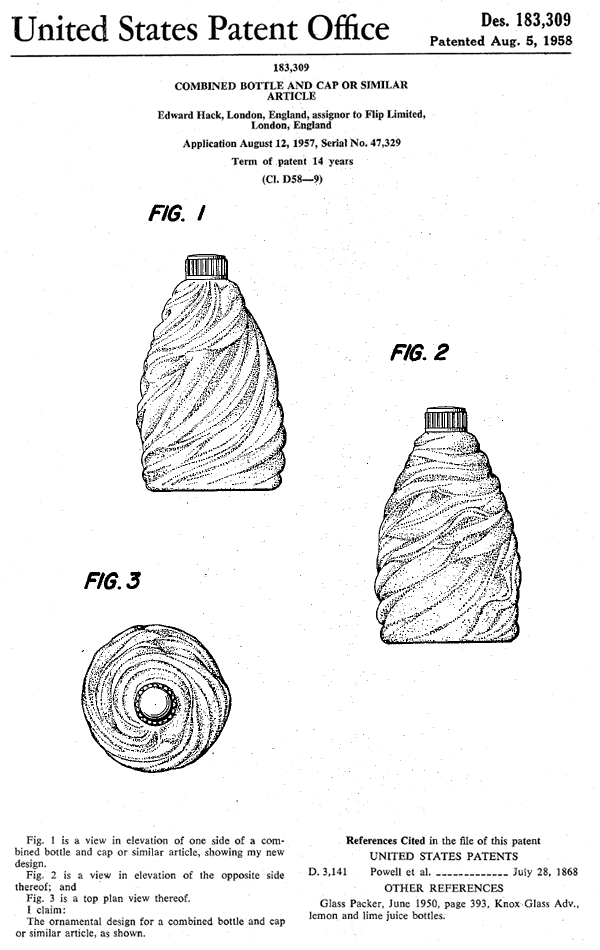 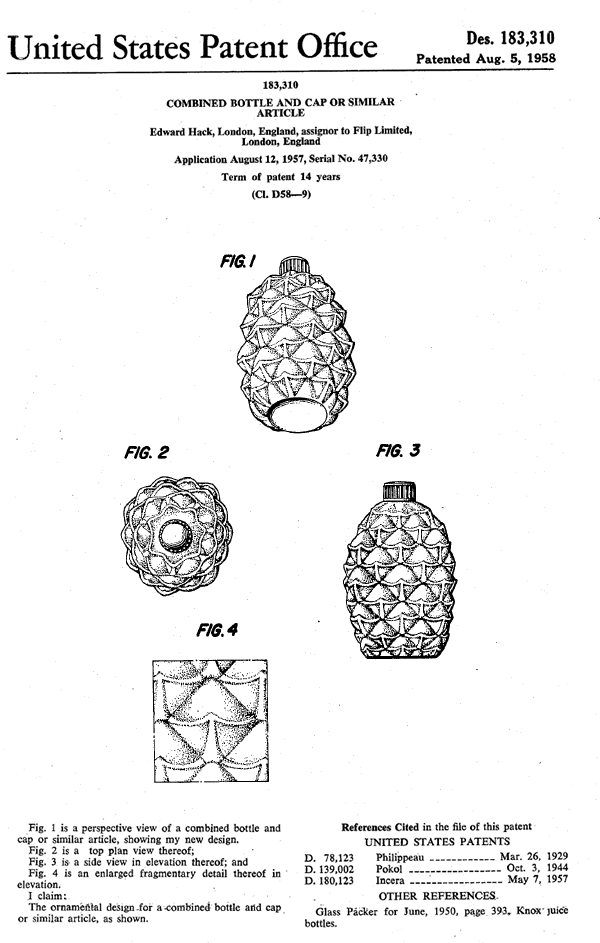 Does Edward Hack’s name on the design patents prove that it was he who designed them? Not necessarily. When packaging design is a work-for-hire, the client’s name sometimes appears on the patent. (Walter Lander’s “tilt” bottle comes to mind.)

If Hack did not “design” these, then I believe he relied on Bill Pugh (at Cascelloid) for the design and hired Cascelloid to manufacture them— just as he did with the HAX plastic lemons. Some of the HAX and FLIP bottles in MODIP’s collection have their brand names embossed into the plastic and some do not. In some cases there is a circular “CAS” mark. (See: here and here) I’m guessing that’s a manufacturers mark for Cascelloid.

There are a couple of additional fruit-shaped bottles from this series that can be seen on the MODiP website — a banana bottle and a blackcurrant bottle. (I found a Canadian patent for banana-shaped bottle.) From 1957-1958 Hack was actively seeking patents for a number of figural bottles. I wonder if the proliferation of fruit-shaped, plastic bottles for “FLIP” was partly due to the speculative nature of this 1954 article about the HAX lemon:

The neat ” Hax ” lemon juice pack has won approbation all round… This adventure in plastics inspires speculation… Will it become a commonplace to dispense juices, sweetened or as in this case unsweetened… in plastics containers which are made up to resemble individual fruits of the larger sizes, or bunches or collections of fruits in the smaller? Is polythene the ultimate beverage container material, inert, hygienic ultra-light, unbreakable?

… a polythene bottle would probably make far more trips than glass for it would merely bounce if dropped and it certainly would, because of its lightness save enormously on transit in respect of tare weight, incidentally requiring lighter outer packages than glass. On the second point, we cannot see much likelihood of progress aside from novelty packs and certain special fruits such as apple, orange, grapefruit, pineapple, and, of course, lemon.

Bottling: A Quarterly Supplement to the Brewing Trade Review, 1954