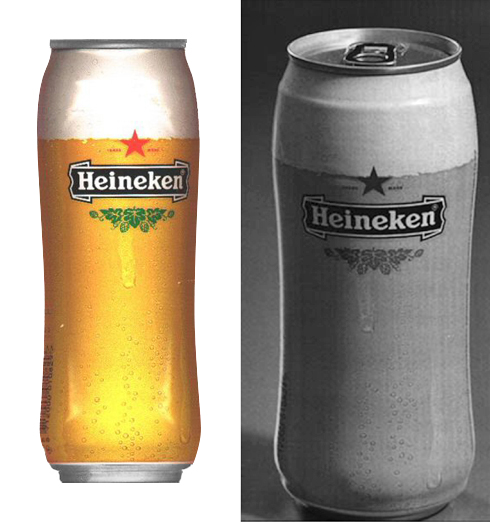 Like ACME’s 1950 beer can label, and the 2012 proposed label for “Naked Beer” —(see: Naked ACME); also: Bohack Beer Can)— this Heineken can from 1997 uses a printed illustration to make their can resemble a glass of beer. 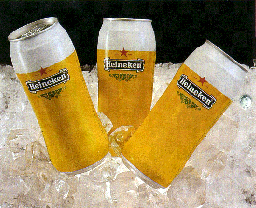 But, here, the can was also shaped to resemble a glass.

“… Crown Cork & Seal Co., for example, created a Heineken can that is shaped and colored like a brimming beer glass.”

Heineken gets in shape: Coca-Cola’s shaped can may have been grabbing the headlines, but in Europe CarnaudMetalbox was first off the mark with a shaped can for Heineken…

In the U.S. the smooth contours and clean high-fidelity lithography of a new Amstel Light can… are being offered to thirsty travelers in New York’s LaGuardia and JFK international airports. The pub-service container replicates the glassware one might get when ordering Amstel in a Dutch tavern. The can is produced by Crown Cork & Seal’s CarnaudMetalbox (Belcamp MD) can plant in Botcherby England. The container holds 16.9 oz of beer an odd volume for U.S. beer drinkers but one that translates into a popular size on the international market 50 centiliters. New York’s airports afford Heineken … controlled high-traffic channels to reach not only New Yorkers but national and international travelers. In its home market Heineken is marketing the beer-glass can in supermarkets and liquor stores.

There are also a number of other beer glass shaped cans that have been patented…. 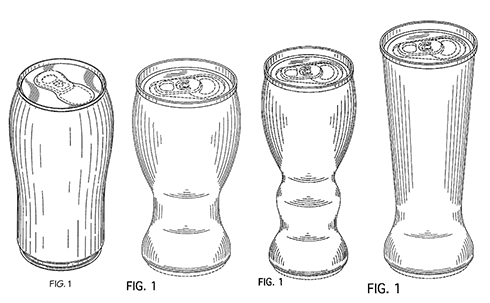