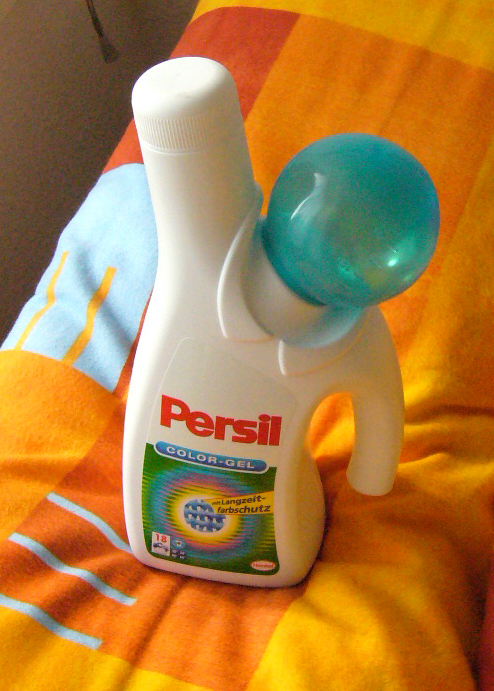 Henkel’s anthropomorphic laundry detergent bottle was designed by Hans-Georg Mühlhausen and Matthias Reimann. Patented in 2008, its upraised, high-fiving arm is the spout and the other arm serves as the bottle’s handle. The spherical helmet/head is a removable measuring cup.

The detergent bottle “Persil Futurino” plays with the peculiarity of man, even in relatively abstract forms, to recognize his equal.

The white polyethylene bottle shows by the asymmetrical arrangement of spout and handle at the same time the form of a man with an outstretched upward and downward as a lowered arm. In between is like a neck, a circular collection to which the dispensing ball is plugged. It is interpreted as the head of this structure, which is further supported by the indicated collar on the bottle. 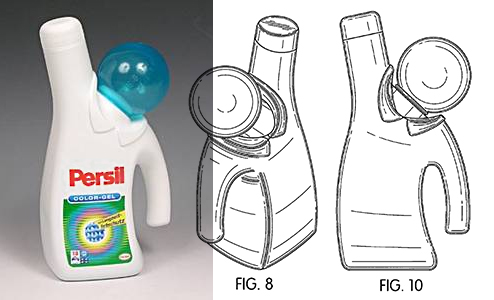 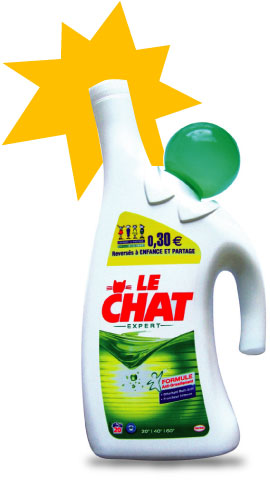 The bottle faceless design gives it a certain ambidexterity. Although there are front & back labels, both sides of the bottle are, in effect, frontal views, since both sides feature front-of-shirt collar points. This reversible aspect enables him to “high five” with either arm.

Henkel’s “Persil” is also sold under the brand names “Le Chat” and “Nadhif.” The bottle was used for Le Chat. (Don’t know whether Nadhif ever came in the “high five” bottle.)

Regarding the bottle’s high-five gesture, in 2007 when the company was promoting the pack, on the one hand they cited “optimism…”

The innovative bottle is designed in the form of a male, with a dosing ball for a head. In the spirit of the motto is an arm of “Futurino” stretched upwards and symbolizes optimism.

Household products out of their closet

… but they have also cited laundry hedonism as their guiding package design principle:

At Henkel, the introduction of a fancy design starts to become a reflex. The phenomenon affects all segments. Latest, Cat on a lot of references to a liquid detergent bottle shaped figure: the arms are used as handle and spout, the head is represented by the ball to complete and put into the machine. “… studies show that nearly half of laundry consumers are hedonists and looking for an emotional dimension in the product,” notes Jean-Renaud Lutt, marketing director at Universal detergents Henkel.

(One more photo, after the fold…) 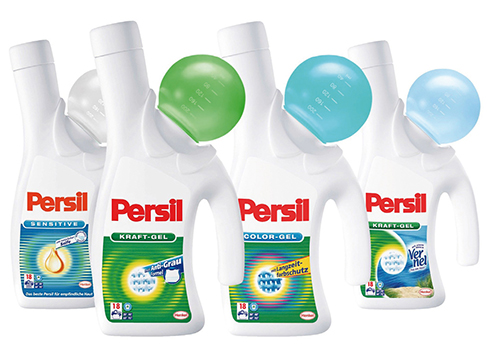