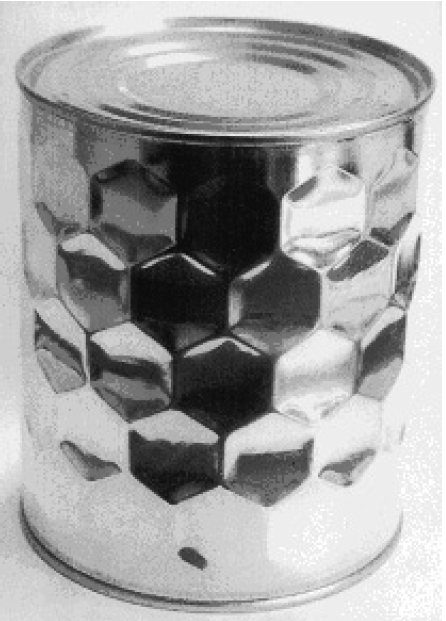 “Hexacan” from Dr. Mirtsch Wölbstrukturierung GmbH: another can, designed with a textured pattern based on the physics of compressed metal cylinders…

“As a graduate student, Frank Mirtsch knew he was onto something when he noticed that pressure applied evenly to a metal cylinder crushes it in a predictable pattern. More than a decade later, he’s patented an inexpensive technique that uses water pressure to create plastic, cardboard, and metals in a honeycomb pattern. This enables construction of plastic bottles, metal cans, and other objects that use 20 to 40 percent less material but are stronger than existing counterparts.”

Like Saturday’s “diamond cut” cans from Toyo Seikan, these cans (technically) are also a “pseudo-cylindrical concave polyhedral” shape, rather than a regular cylinder. Although, in this case, the polygon faces are dimpled hexagons, rather than concave pairs of triangles.

CANS CAN BE LIGHT

… Tin plate is quite heavy if you try to lift a roll of it. Still it can be made into relatively light food containers, and even lighter ones if you consider the recent improvement in can design. It originated from a coincidence in the laboratory of German physicist Frank Mirtsch towards the end of the seventies. He discovered that a tin cylinder under pressure with steel rings on the inside, deformed in regular square patterns at unreinforced places, thus strengthening it. This led to the assumption that a honeycomb pattern might result in even greater strength and stiffness, and that thinner tin plate would be needed to produce cans. Every hundredth of a millimeter counts in the vast numbers that cans are produced in. Further research finally resulted in the ‘Hexacan’. The main difficulty that had to be overcome was not so much the shape, but the labeling. It can’t be done with paper, but the manufacturer has found a way of dealing with this problem by applying printed plastic. The honeycomb can weighs 10 to 15 percent less than its conventional predecessor. And that is quite a lot, considering the billions of containers produced every year, 1.4 billion in the Netherlands alone. Hexacan will be on your shelves soon if it is not there already.

“Hexacans” were promoted for a time, but they do not appear to have ever caught on to the degree that the writer above was anticipating. (Chances are, you do not have any “hexacans” on your shelves at home today.) 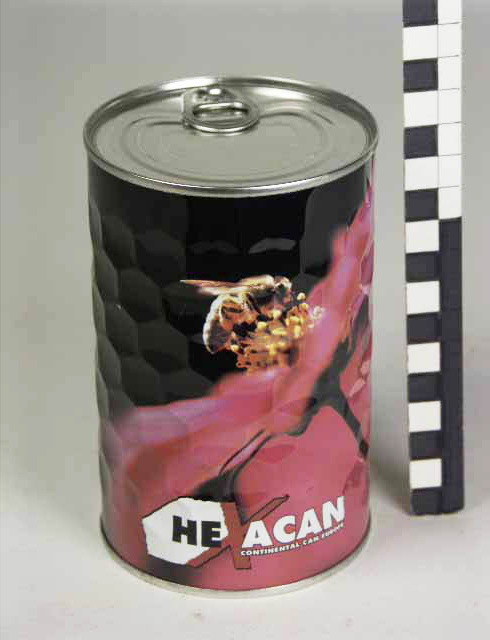 A promotional “Hexacan” by Continental Can Europe (from: Historisch Museum Deventer)

(4 more photos of promotional “Hexacan” packaging appear after the fold…) 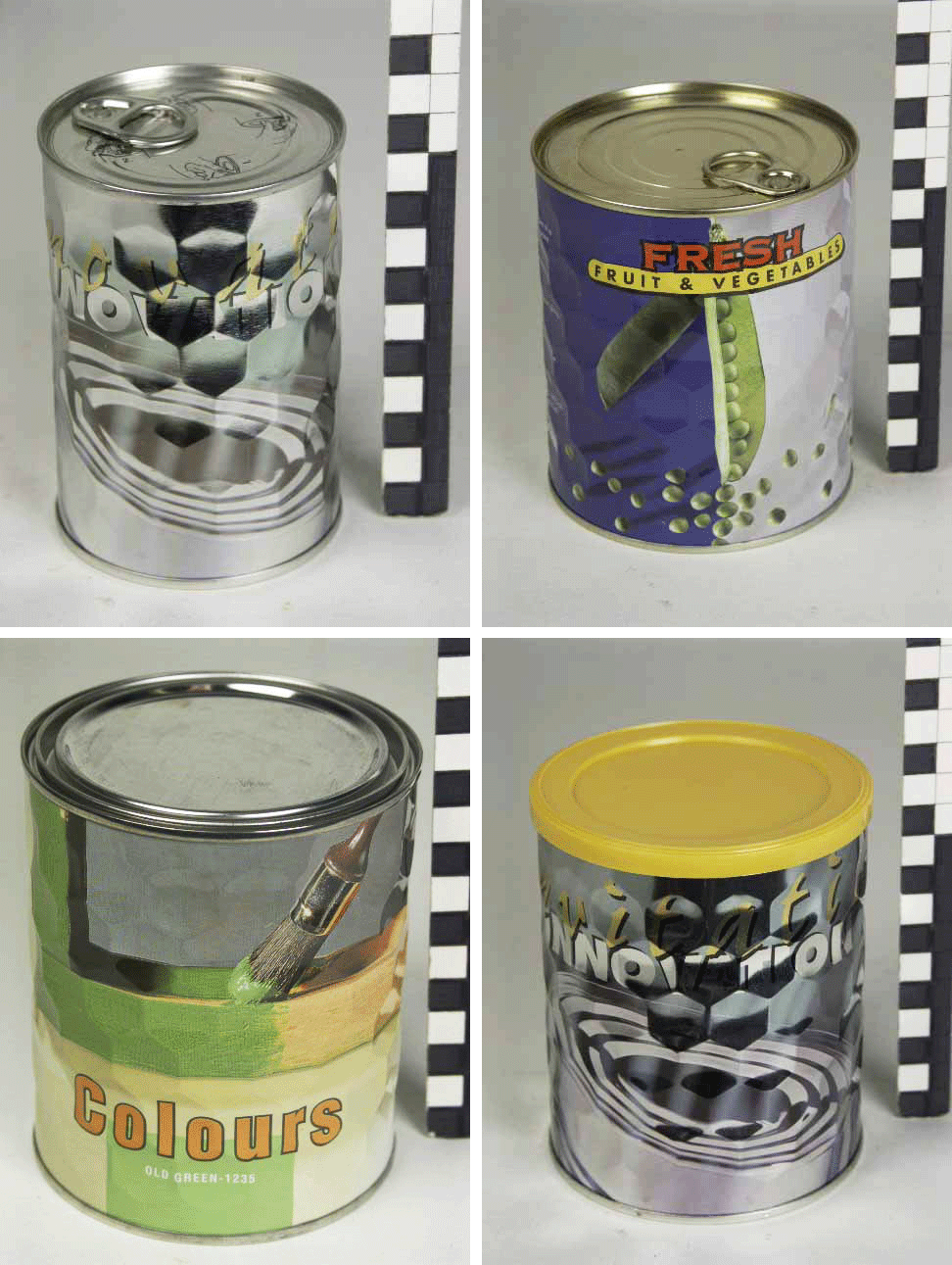 4 “Hexacan” containers by Continental Can Europe (from: Historisch Museum Deventer) 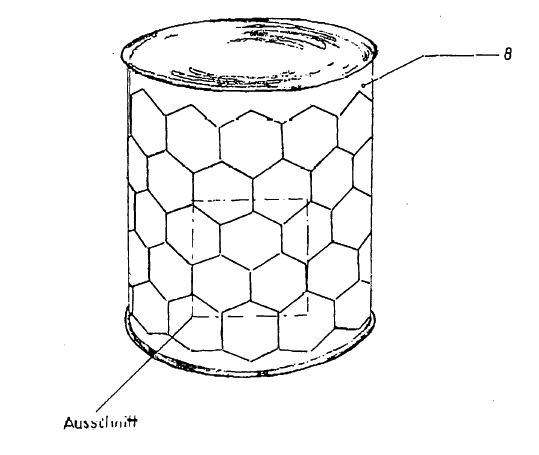 Above is a patent drawing from Mirtsch’s 2003 German patent for “Einsatz der Wölbstrukturiertechnik für Packstoffe und Packmittel” (Which roughly translates as: “Use of hexagonal structuring for packing materials and packaging”) 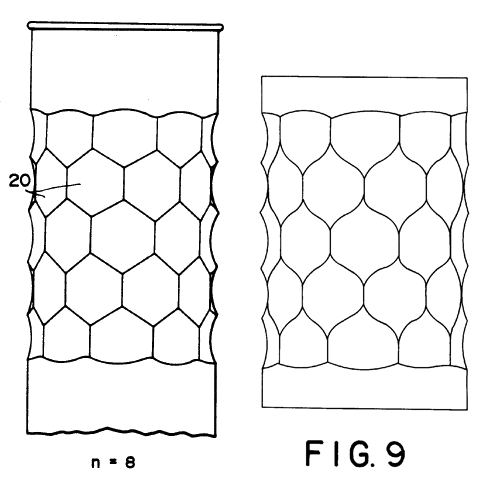 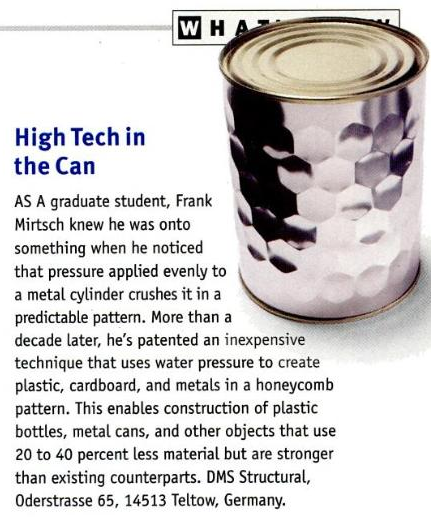