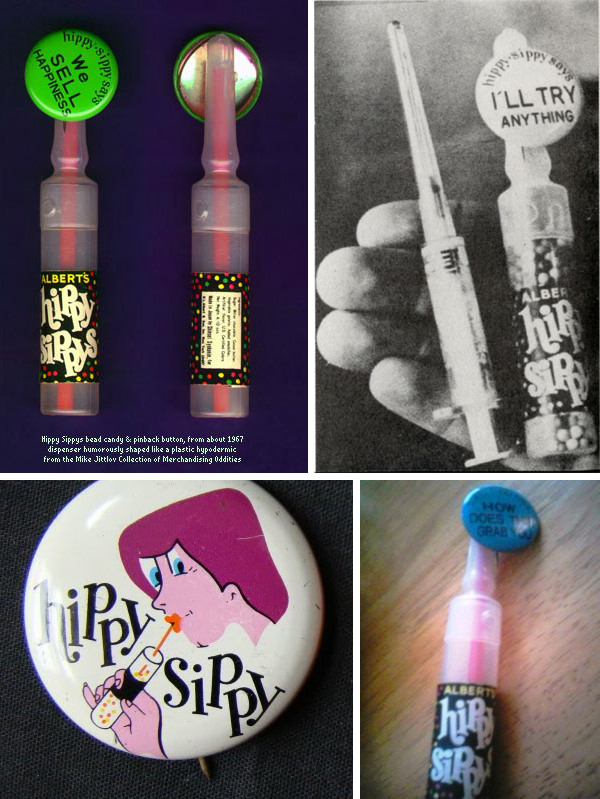 “Hippy Sippy,” a late 1960s candy made in Japan and imported by R.J. Albert & Sons came in a hypodermic syringe shaped container, caused some controversy at the time, and was apparently “recalled” by the FDA in 1969.

The photo (above right) from Edward M Swartz’s 1971 book Toys that Don’t Care shows an “Albert’s Hippy Sippys” package next to a real syringe for comparative purposes and offers a scathing critique of toy industry “self-regulation.”

We wage an all-out war on drugs, yet tolerate the marketing of a toy imitation hypodermic needle called “Hippy Sippy” complete with an attached button saying “Hippy Sippy says “I’ll Try Anything.’ ” The removal of these toys from the market may not solve our national drug… problems, but what effects will their continued availability have on our children? The toy industry is big business with three billion dollars in sales annually — approximately the level of new car sales in 1970. Detroit, however, must meet certain federal safety regulations while toy makers are under no such restriction. The toy industry engages in a form of self-regulation which is, in fact, no regulation at all. The reason for this failure at internal regulation is the highly competitive nature of the industry which views safety precautions as a costly luxury. 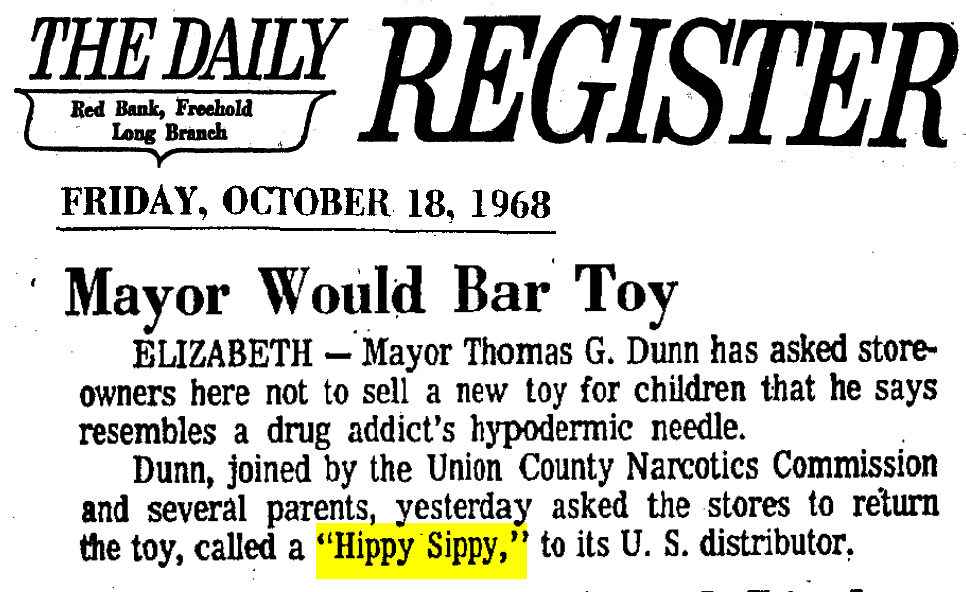 But was Hippy Sippy a toy or was it a candy? An 1968 article in “Candy and Snack Industry” magazine asserts that the candy industry was being unfairly singled out:

The “big story” dealt with protests voiced by parents and town officials over the sale to children of tiny, round chocolate candies that come in containers resembling hypodermic needles and syringes with such slogans as “Hippy Sippy,” “Happiness Lives” and “Love.” (The product is manufactured in Japan and sold in the United States by a reputable, highly ethical, well known importer, who incidentally has withdrawn it from the market.)

We wish we could laugh. But whether we like it or not, it really isn’t funny at all. Right or wrong, this is the kind of negative PR that will not only hurt the seller of the not too important product, but the entire candy industry. In many ways this item has its share of irony. For some reason, the same type of product marketed by the toy field would hardly cause a ripple.

Interestingly, syringe-shaped toys were, in fact, also “causing ripples” and were given equal criticism along with Albert’s Hippy Sippys in Toys That Don’t Care.

The “reputable, highly ethical, well known importer” was Sidney J. Albert, who Candy and Snack Industry magazine described 1 year earlier as, “a soft-spoken and affable man of some 60 years, and rarely does he get excited except when talking about his firm and the future of importing.”

Offered in festive 1968 by the Alberts company, Hippy-Sippy consisted of multi-colored pill-sized candies sold in a toy hypodermic needle. In case the drug analogy escaped anyone, it came with buttons carrying messages such as: “Hippy-Sippy says: I’ll try anything,” and “Happiness Lives.” The candy…  gives new meaning to the term “junk food”…

From the November 5, 1969 issue of the Press Telegram:

Los Angeles County authorities found themselves a bit uptight about a candy product called Hippy Sippy. Supervisor Kenneth Halm noted that William Hunt, a member of the county’s Narcotics and Dangerous Drug Commission, was concerned that the beads were encased in plastic bottles which he said were shaped like hypodermic needles, contain straws for children to sip the beads and are sold along with buttons with labels such as “Sock It To Me” and “Please Feed Me.” Halm said Hunt feared that youngsters might begin to experiment with drugs later if they buy candy from such containers. Hippy Sippys are not only sold in Hunt’s home town of Gardena but in a refreshment stand on the second floor of the Hall of Administration…. one moppet about 5 years old appeared not too into the drug scene when shown the candy. “It just looks like a bottle” she said.

R.J. Albert & Sons eventually moved from the Bronx to Connecticut and no longer imports candy in syringe-shaped containers. Although, others do…

(Today’s version, after the fold…) 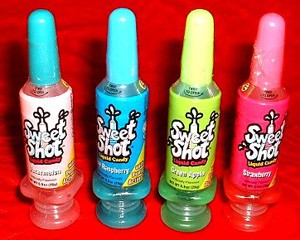 “Sweet Shot is a liquid candy that comes in a syringe-like plastic case. That means that one designer sat down, drew a candy that looked like a hypodermic needle, took it to a board meeting, had several co-workers and higher-ups look at his drug paraphernalia candy, was met with their approval and looked on with a sense of self-satisfaction as his dream candy was loaded up on the back of shipping trucks, ready to meet the new tomorrow, never once realizing his confectionery could potentially teach kids that good things are found inside of needles. ”

What Candy Will Corrupt the Youth this Halloween Season?