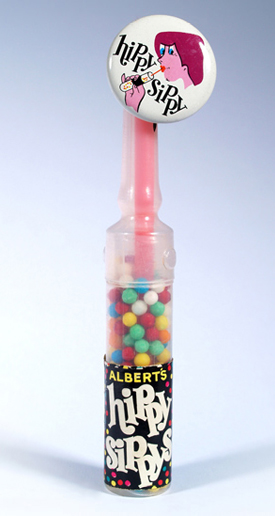 Albert’s “Hippy Sippys” candy with the syringe-shaped packaging is something we’ve already covered in some depth.

Recently, however, this well-lit “hero shot” came to my attention.

The eye-candy product-photo, in this case, does not come from Hippy Sippy’s late 1960s manufacturer, but from the Candy Wrapper Museum’s recent book, Classic Candy: America’s Favorite Sweets, 1950-80 by Darlene Lacey.

In 2012, when I first wrote about this product and its controversial package design, I quoted a 1969 newspaper article about the Los Angeles county supervisor’s objections, titled: “Hypodermic Goodies — Supervisor Uptight Over Hippy Sippys.”

What I didn’t mention then, was that there were also officials here, on the east coast who were (heroically) fighting Hippy Sippy.

Thomas G. Dunn, the mayor of Elizabeth, NJ, in particular, garnered a lot of news coverage over the issue. I think my favorite of the these headlines is “N.J. Mayor Rips Gumball Insignia.” 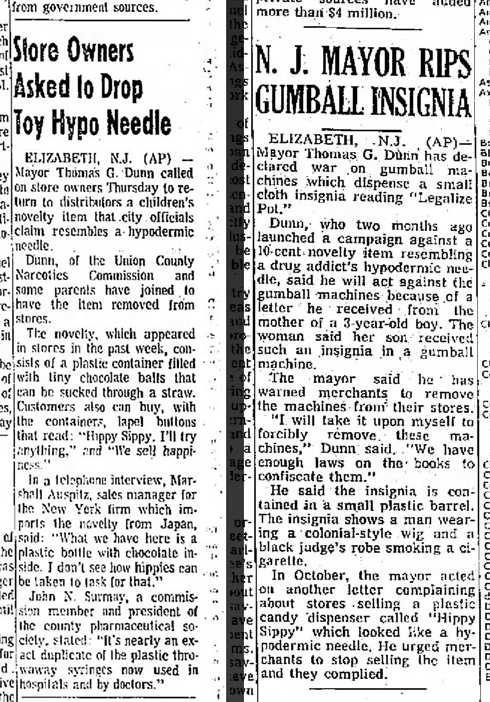