We’ve seen other bottles used to make some nice hourglasses, but using Coke bottles to do so adds an additional exponent of meaning: a fractal visual/verbal pun.

People may still describe Coke bottles as “hourglass shaped,” but the associations are more often anthropomorphic. Coke’s bottle shape has always been more about an “hourglass figure” than resembling a sand clock.

The “Custom Made Coca Cola Bottle Hourglass” on the right was offered for sale at an auction in North Carolina last year. (This lot was not sold.)

No real information about the object is offered, but the bottle cap shaped base(s) make me think it was a promotional display, rather than someone’s personal project.

The second example of this idea (below) is from Lucas “Blunderbuss2” who writes:

I came up with this idea about 20 yrs ago. Thought it would be a nice idea for an advertisement. The idea was to have “TIME FOR A COKE” at the bottom & top but one to be inverted. Never could decide whether the top or bottom should be inverted! I would like to hear opinions on that point. This prototype was made from real bottles, real wood & glass blasting beads for sand (drove U.S. customs nuts when I brought it up).

Thinking that I have what I can sell to Coke, make my fortune… I made my move. I contacted Coca Cola & they told me that they have 4 advertising agencies that I would have to work thru. Each told me in turn that they didn’t take “outside ideas.” 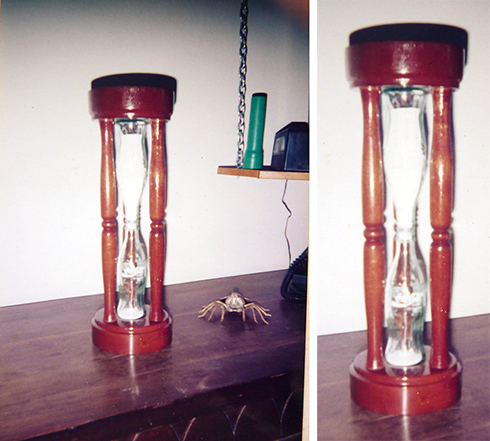 « The Scope Mouthwash Bottle Hourglass
The K2-62 Electromagnetic Can Smasher »