In our previous post we scoured the internet for all the information that we could find about the S.O.S package that appears in several famous news photos of the Nixon/Khrushchev “kitchen debate” of 1959.

The thing is, the AP Photo above shows us that there were at least four other consumer packages on display that day in the “kitchen debate” kitchen.

Why is it that writers who reported on this event (if they mention any of the packages at all) usually only mention the S.O.S box?

Maybe it’s because the military/maritime connotations of the brand name strike them as ironic. Considering the context — two super-powers arguing in a kitchen about whether communism or capitalism is the way to go. 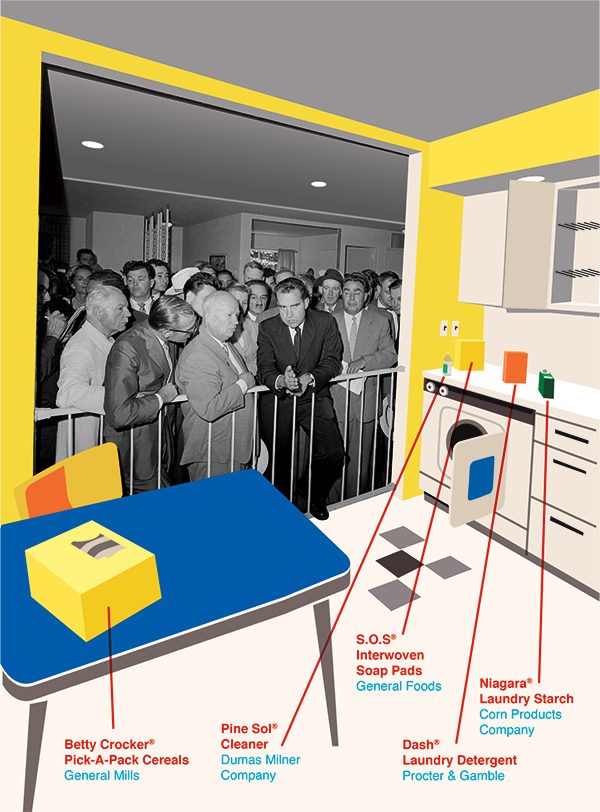 One thing that struck me was that on the back of that S.O.S “kitchen debate” box, there’s an illustration of another kitchen with call-outs pointing out various product benefits.

That’s what gave me the idea to make a similar style illustration depicting the “kitchen debate” kitchen. I’m no illustrator, but I’m going to go out on a limb here and use my own illustration to identify all 5 kitchen debate packs.

I must apologize to more talented illustrators, who would have been more capable of properly executing an illustration in this style.

We’ve already covered the S.O.S box. Now we look at the others.

Details about the other 4 kitchen debate packs, follow after the fold. 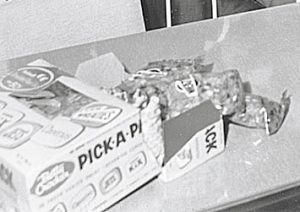 Someone must have roughly torn open the Pick-A-Pack cereal box that appears in the Associated Press “kitchen debate” photo.

How did the manufacturers intend for these products to be used at the exhibit? Probably for product demonstrations, but a tidier presentation might have reflected better on the brand. There’s a photo by Elliott Erwitt showing a reporter with camera equipment on the same table, but I imagine he was too busy taking photos to be opening cereal packets. 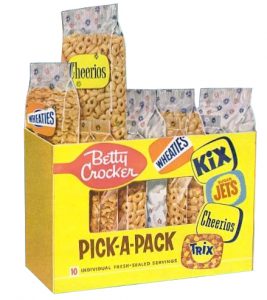 Although we generally associate the “Betty Crocker” brand with baked goods, General Mills sold cereals under this brand name.

Still another boon to the housewife is a cereal package designed to satisfy the youngster with varied taste in breakfast cereals. Called the “Pick-A-Pack,” a bright yellow paperboard carton holds ten packages of assorted cereals. Three packages of Cheerios. three of Wheaties, two of Jets, and two of Kix. All are wrapped in cellophane, except the Jets, which are packed aluminum foil. Prominent on the carton is the recently adopted trademark of Betty Crocker, a red spoon. 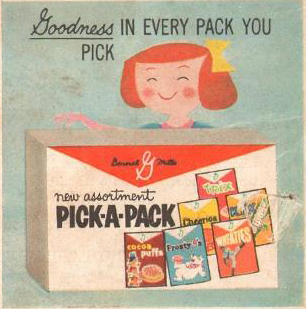 By 1960 General Mills had redesigned the Pick-A-Pack — uh… pack. They removed the Better Crocker brand name, making it a General Mills cereal product. They also changed the assortment of cereal contained within.

“Pick-A-Pack” the assorted cereal package from General Mills, Minneapolis, has changed its face and variety of cereals. New assortment has three cellophane envelopes each of Cheerios and Wheaties; and one foil envelope each of Frosty O’s, Kix, Trix, and Cocoa Puffs.

General Mills also conducted some free automobile promotions on both versions of their Pick-A-Pack package. 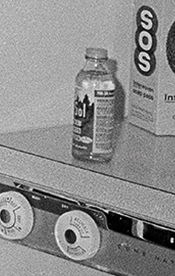 It’s hard to make out the Pine-Sol brand name in the reduced photo. If you zoom-in close, however, you can make out “Sol” and the pine trees in the background.

The layout of the 1955 label above looks pretty close to the bottle in the picture, except there also appears to be the “Good House Keeping Seal” in the lower right of the kitchen debate Pine-Sol bottle.

The 1957 label below also has the “Good House Keeping Seal” although the layout is different. 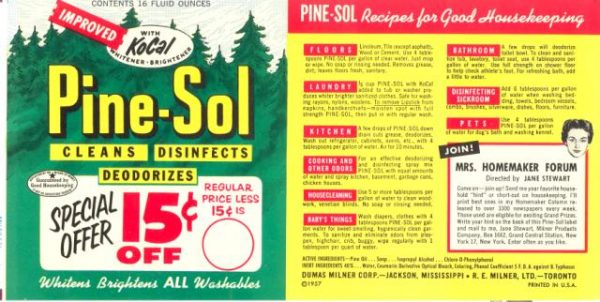 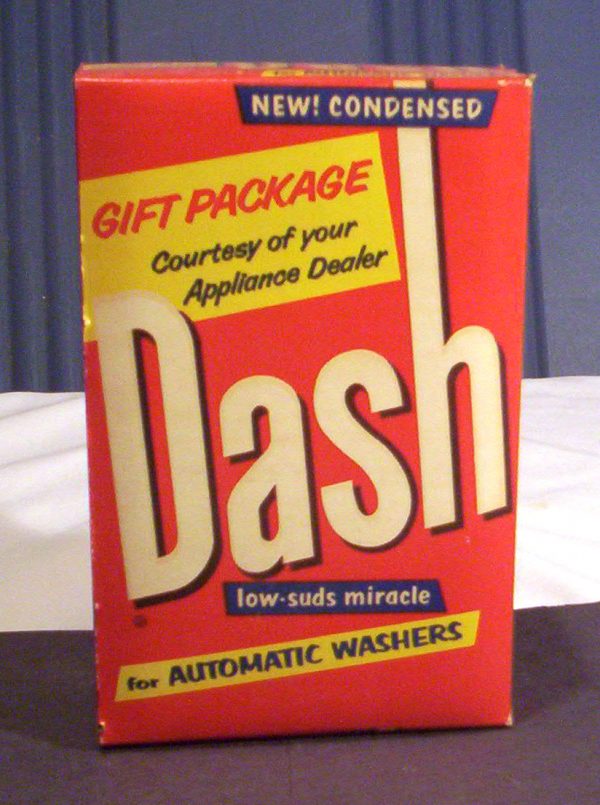 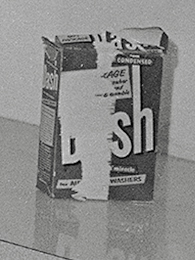 As with the Pick-A-Pack cereals box, someone appears to have roughly torn open the Dash detergent box appearing in the “kitchen debate” photos.

Still, we can see enough of the label to recognize that it matches the “Gift Package” above. Appliance dealers included a box of Dash free with the purchase of certain washing machines and/or dryers.

The 1958 commercial shown below shows how Dash detergent was used by Westinghouse to promote its washing machines. Although the box shown in the commercial was not the appliance dealer “Gift Package.”

We also like the commercial below for its unusual setting on a U.S. Naval base. 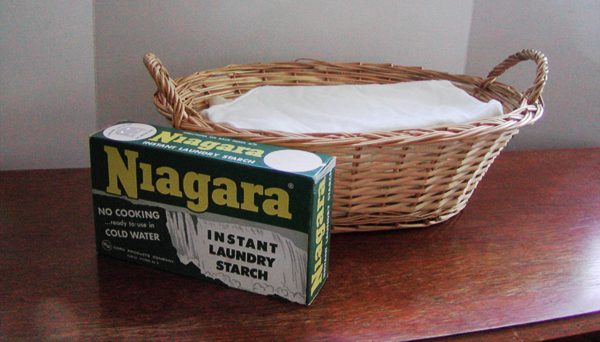 Over the years, the Corn Products Company made changes to the design of their Niagara box, but this 1946 box above seems to match the one that appears in the kitchen debate photo.

I get the feeling that fewer consumers are starching their clothes these days. But, on the other hand, how would I know?

Top photo is from TimePageant’s Etsy Store. The lower photo came from SassySisterSalvage’s Etsy Store. Both boxes have already been sold. 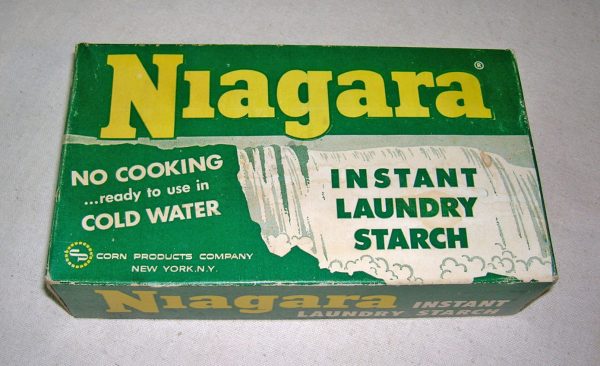 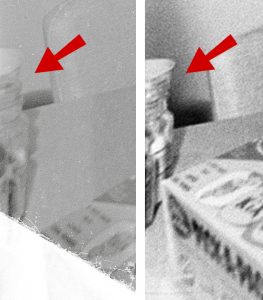 It’s probably nothing, but just to the left of our torn open Pick-A-pack box, there is something else.

It’s mostly cropped out of the frame of the photo, but what is it, exactly that we’re seeing there?

A stack of Tupperware containers… a paper cup and some bottles? Or is it yet another kitchen debate pack?

2/19/17 update: Okay, I think I’ve figured it out. You know that photo that I mentioned earlier? The one by Elliott Erwitt that shows a reporter beside the Pick-A-Pack table? It appears in a contact sheet published in 2014 by Business Insider. The photo of the reporter is #43-44. And just to the left of that photo is another photo (#41-42) that shows a portion of a wall behind the table. And on that wall you can see part of a spice rack. 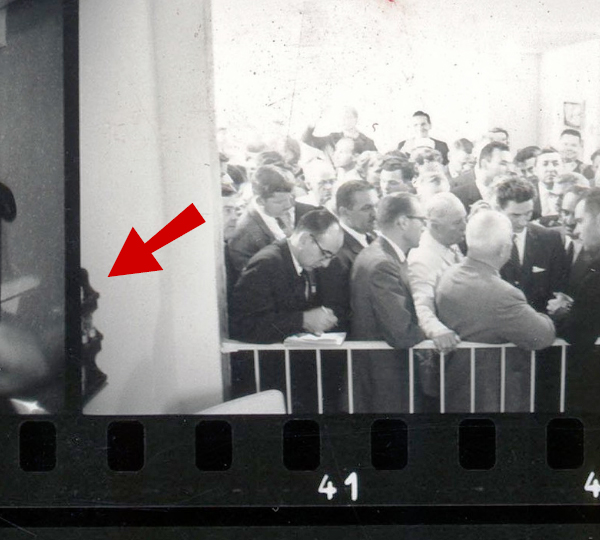 You can also see that there are some bottles missing from the spice rack. I figure it’s those missing bottles that we’re seeing on the table, to the left of the Pick-A-Pack box.

Moreover, I think it’s likely that the rack and the spices were a product of John Wagner & Sons. 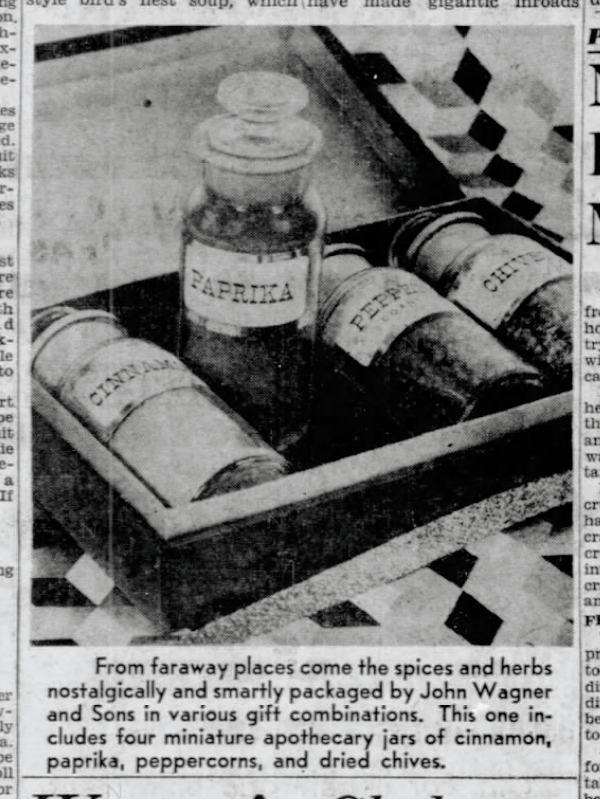 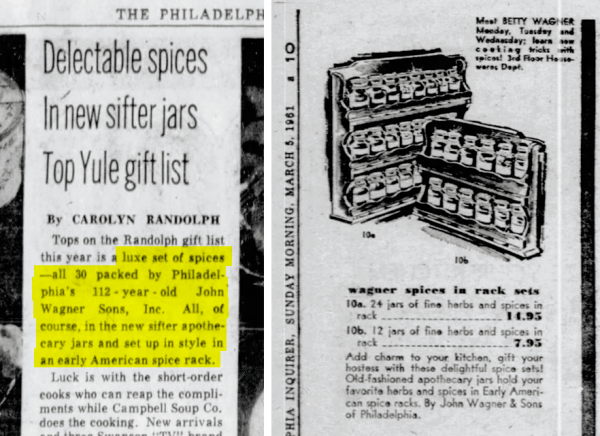 2 more clipping from the Philadelphia Inquirer: on left from 1959 and on right from 1961

Getting back to the original AP photo at the top of this post, the AP photographer didn’t actually take the photo, although it was his camera. William Safire took the picture.

The A.P. photographer was held back. I tried to sell him to the guard as a garbage-disposal demonstrator, but the budget-priced house did not have a garbage-disposal unit. Frustrated, he lobbed his camera into the kitchen for me to take a shot.

I backed up to include the washing machine, but a pushy Russian bureaucrat [Leonid Brezhnev] inserted himself into my composition. (I couldn’t get my washing machine in without including the bureaucrat, so I clicked and caught him with his eyes closed — served him right.) Another Russian, Anastas Mikoyan, was at Khrushchev’s elbow, looking glum. I threw back the A.P. camera, narrowly missing Khrushchev.

Meanwhile a real photographer, Elliot Erwitt of Magnum, captured the image of Mr. Nixon jabbing the Soviet leader in the chest, which was used the following year when the Vice President ran against John Kennedy as a man who could stand up to the Russians.

Erwitt also photographed some other seldom seen views of the the GE (General Electric) kitchen debate kitchen: here and here. And Howard Sochurek took a photo from this angle.