I cannot find the etymological origins of its first usage, but at some point in time, the word “package” acquired a new racy meaning:

Maybe this all started in the early 1980s when Bruce Weber’s photos of athletes in Calvin Klein brand jockey briefs, forever changed the way men’s underwear was marketed. Like the deceptive photos on cereal boxes (enlarged to show texture), male “packaging” was suddenly everywhere and in your face. Supposedly, it’s a common photo stylist’s trick to have the model wear two pairs of briefs with a slice of Wonderbread in between to smooth out the area to an acceptably non-specific bulge. The boundaries of what was acceptable were clearly in flux, however. 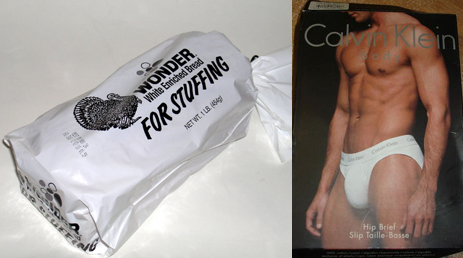 (more to read after the jump)

Along came the “International Male” catalog which seemed to do away with the Wonderbread entirely. (Remember how Ben Stiller, as Derek Zoolander, took a sort of earnest pride in his work for this highly esteemed catalog company?)

The Urban Dictionary’s definition of “package” notwithstanding, I would argue that the packaging metaphor is more apt if the underwear is thought of as the “package” while the contents (described above) are more like the “product”  —(or the “junk”).

Suffice to say, the men’s underwear department looks very different now from what it did 25 years ago. (For more about that, see Guy Trebay’s NY Times piece from 2004.)

What does any of this have to do with legitimate retail packaging?

Either women are buying these underwear packages for their husbands or men are just inexplicably compelled to purchase homo-erotic packaging. Maybe it’s not attraction, but identification that sells these underwear packages. But, begging the question of to whom “sex sells” in this case, what can men’s underwear teach us about packaging? That sometimes it’s an effective strategy to simultaneously conceal and reveal certain attributes of a product? I know that sounds like a cheesy reference to strip tease, but some packages may sell better because they conceal the product. Maybe the picture on the outside makes the product look better than it really is. Or maybe the package is just showing the product to its best advantage with die cut windows and and an opening through which the consumer is invited to feel the fabric, etc.

Another, less prevalent slang usage for the word “package” is for certain illegal drugs…

Interestingly, the etymology of the word “heroin” is quite clearcut:

Heroin, coined 1898 as trademark registered by Friedrich Bayer & Co. for their morphine substitute, traditionally from Gk. heros (see hero) because of the euphoric feeling the drug provides.
–The Online Etymology Dictionary 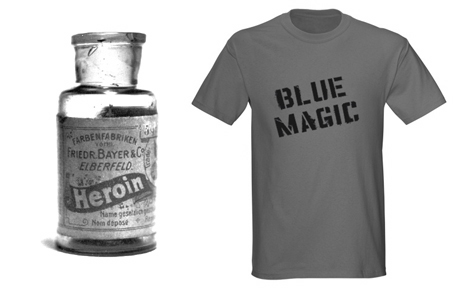 In American Gangster, Denzel Washington plays Frank Lucas, drug-dealer/marketing-genius who shows his business acumen in various ways: better product, lower price, and unique brand name, “Blue Magic” (Same logo now available on a T-shirt near you!) The branding of illegal drugs by marketing-savvy drug dealers is now business-as-usual. Even in Frank Lucas’s day there were dozens of name brands, although little in the way of trademark protections. (See list of heroin brands.)

But what does this have to do with retail packaging today?