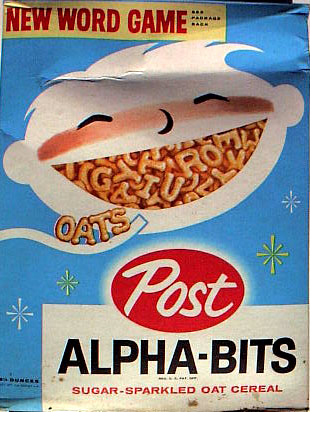 Not the first time we’ve mentioned rats (or mice) here on box vox and, as previously disclosed, I myself, once had a pet rat. Given to me by another rodent-loving classmate at RISD, “Lucky” played a starring role in my friend, David Wilder’s video, illiteRAT. Hadn’t seen this tape in over 30 years, but I think its conceptual rigor still holds up.

And it was nice for me to see the little feller again, after all this time. (I don’t really remember what the cereal box looked like that Lucky’s Alpha-bits came in. Lets just say, for arguments sake, that it was the one on the left—photo from The Imaginary World—with the mouth-shaped, faux die cut window.)

In my last year at school, I lived in an office building in downtown Providence where I’d let Lucky scamper, dog-like, about the loft. It’s surprising how frisky a rat can be.

I recall eating a lot of ice-cream cones one Summer. (This was before I found out I was diabetic.) I got into a habit of methodically reducing the size of the ice-cream cone—keeping it in classic proportions—until I had formed a miniature, rat-size ice-cream cone. This, I would then present to Lucky and he’d grab it in his hands and eagerly finish it off. (Sort of fractal, now that I think of it…)

Sadly, my free-range policy of giving Lucky the run of the place, ultimately led to his demise. Turned out there were dusty old trays of rat poison under the radiators, that I didn’t know were there.