I was hoping that “intersecting milk cartons” were already a thing. But, alas, no example seemed to exist online. So, for the 5th and final day of “Polyhedral Milk Carton Week,” I had to make it myself.

What are we looking at? My 3D animation showing the intersection of two gable-top milk cartons. They intersect in (more or less) the same manner as a polyhedral compound of two cubes. 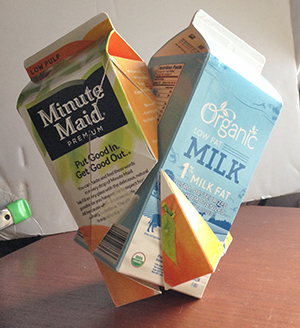 Of course, milk cartons are not cubes. They’re more like rectangular prisms. And it wasn’t at all obvious (to me) what the intersection would look like with taller shapes.

So prior to making the animation above, I made this “maquette” using two actual gable top cartons. (You can see the evidence of my trial-and-error geometry on the left hand carton.)

Clearly my maquette was not ready for prime time. I figured a 3D rendering would be a better way of presenting my hypothetical dual container. 3D rending, however, is outside of my usual wheelhouse. What software could I download and quickly learn just enough to do this one thing?

OpenSCAD is what worked, in this case. (“Open” stands for “open software” and “SCAD” for “Solid Computer Aided Design.”) 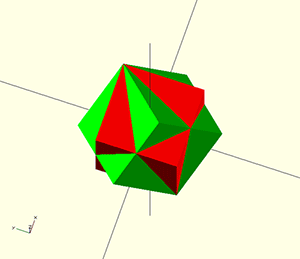 I relied heavily on Chris Wallace’s OpenSCAD code for his 2014 “Compound of 2 cubes.” He also wrote code for a “Compound of 3 cubes” .

Well, I tried to resist the aforementioned “temptation.” But the heart wants what the heart wants. And mine wanted to see what three intersecting milk cartons might look like. So 8 days later I’m adding another such animated gif:

This is not the first time I’ve wrestled with intersecting cubes. A long time ago, (around 1985?) I attempted to make a polyhedral sculpture from record covers. I don’t think I ever took any photos of that fiasco. Thankfully.

My record album sculpture was based on 5 intersecting cubes. Since each cube required 6 album covers, I had to cut up and reassemble 30 album covers. Into the crystalline, polyhedral shape you see below. 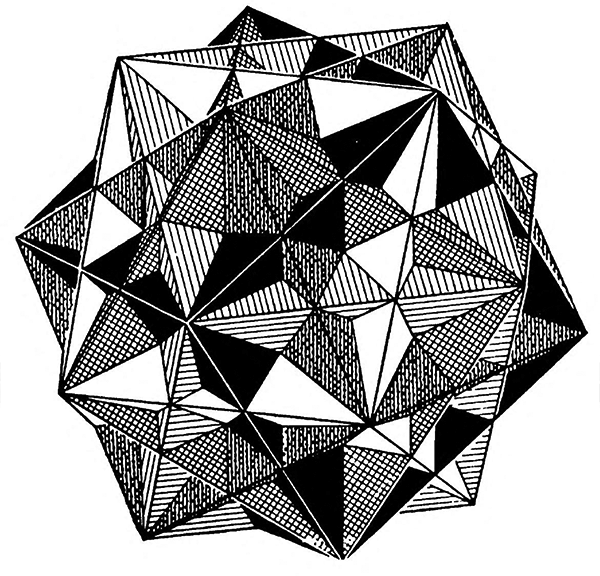 Even when all sides of each cube are the same color this is a pretty confusing structure. Just imagine how indecipherable the cubes were in my (incomprehensible) sculpture. Each cube being made of 6 unrelated, mismatched album covers. And to top it off, the tape that I used did not hold the pieces together for very long. (Christian Marclay, I am not.)

I know someone somewhere is thinking: these are not intersecting milk cartons, because one of them is clearly a carton of orange juice.

Fair point. For better color contrast between the cartons I decided that one of them ought to be orange. But this also makes our polyhedral carton oddly theoretical.

After all, what sort of beverage is contained in the Venn diagram intersection of the two cartons? A curdled, citrus-flavored milk?

Or is it more of a quantum superposition sort of beverage? Where you cannot know which liquid this package contains until you pour it into your (Schrödinger’s) cat’s bowl.

“Regarding this historically longstanding problem, the Schrödinger cat may be considered the most vivid carton model.”

Just kidding with that last quote. (I’m guessing that “carton model” was a misspelling or typo. Probably the author meant to write the most vivid Cartan Model.) Milk cartons do not yet play a big role in quantum physics. Although, egg cartons do.