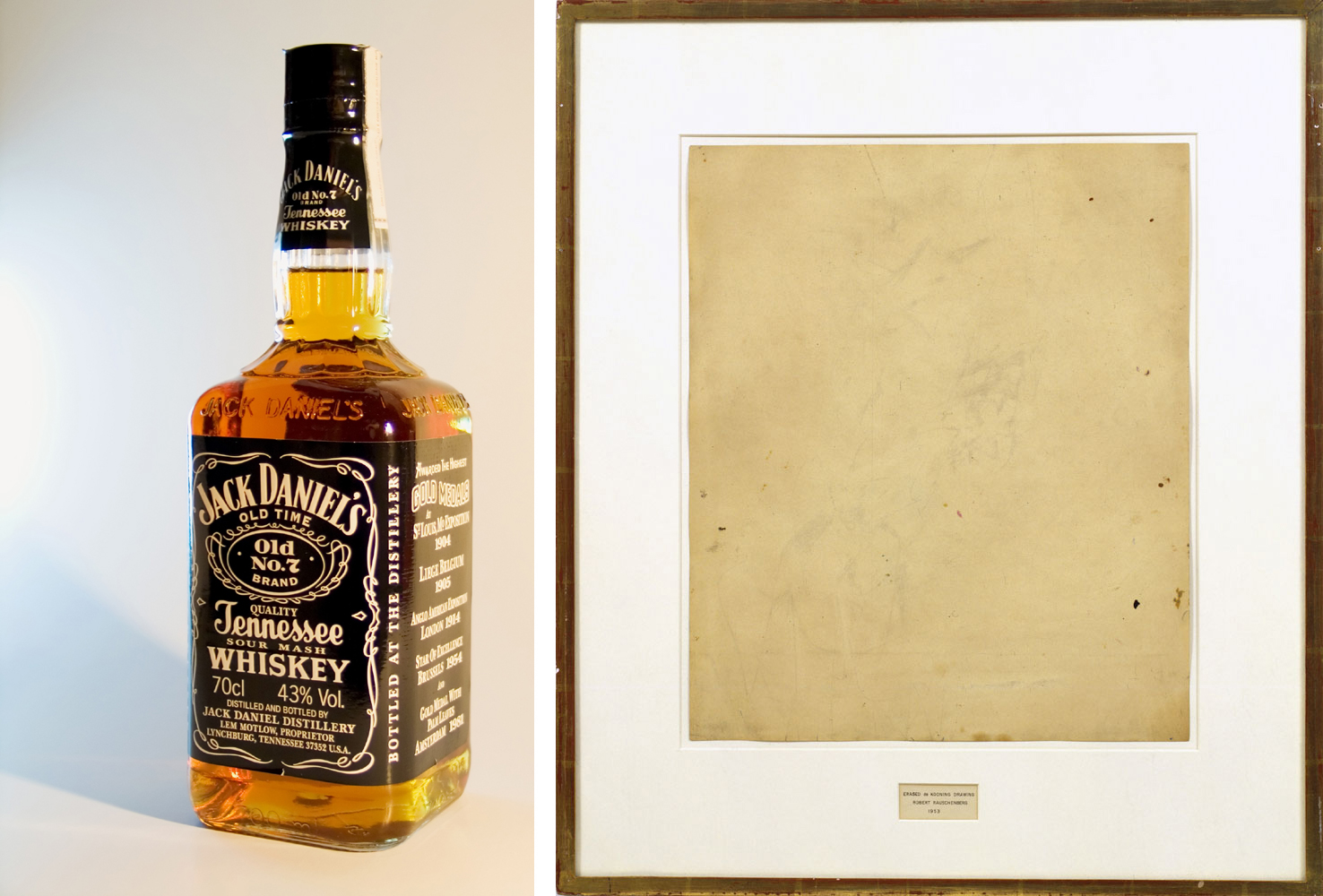 Following up on the issue of Willem DeKooning’s drinking and brand preferences —(see: Ale Cans Part 3: “The Drinking and Brand-Preference / Sexual-Preference Story”)— I now present, for your consideration: a square1 bottle of Jack Daniel’s alongside Robert Rauschenberg’s 1953 “Erased de Kooning.”

Conceptually groundbreaking at the time, this artwork created some controversy in the art world. (negation as creation)

For his part, de Kooning showed plenty of intelligence and grace, cooperating in the way that he did, although, reportedly, he was angered when Rauschenberg actually exhibited the (former) drawing.

Thinking about it now, 60 years later, what with de Kooning’s history of alcoholic blackouts and his later Alzheimer’s disease, the idea of an “erased de Kooning” is sort of ominous.

(Some footnoted digressions about Jack Daniel Distillery… after the fold…)

1. Apropos of nothing—(we’re not talking here about an erased Albers)—Jack Daniel Distillery considers the squareness of their bottles an important milestone of their 1895 branding efforts…

“Bottle salesman were eager to capture were eager to capture this new business at the now famous Jack Daniel Distillery. Many bottles were presented to the little distiller2 for his consideration. One bottle, however, caught Mr. Jack’s eye. It was distinctive. It was unique. Mr. Jack stood back to look at the variety of bottles before him, and the bottle that was most attractive was squarely in front of him: a square bottle. No other distiller used a square bottle, and no other distiller had a whiskey as fine as Mr. Jack’s Old No. 7. Why not choose a bottle as distinctively different as his whiskey?”

2. “The little distiller” bears explanation… Jack Daniel’s small stature is a part of this company’s corporate storyline. About their founder, the book quoted above also says: “His size—even as an adult he would be only five feet, five inches tall—seemed to necessitate that he develop giant-size character traits. He had spunk and he had gumption, both traits that were admired in his day.”