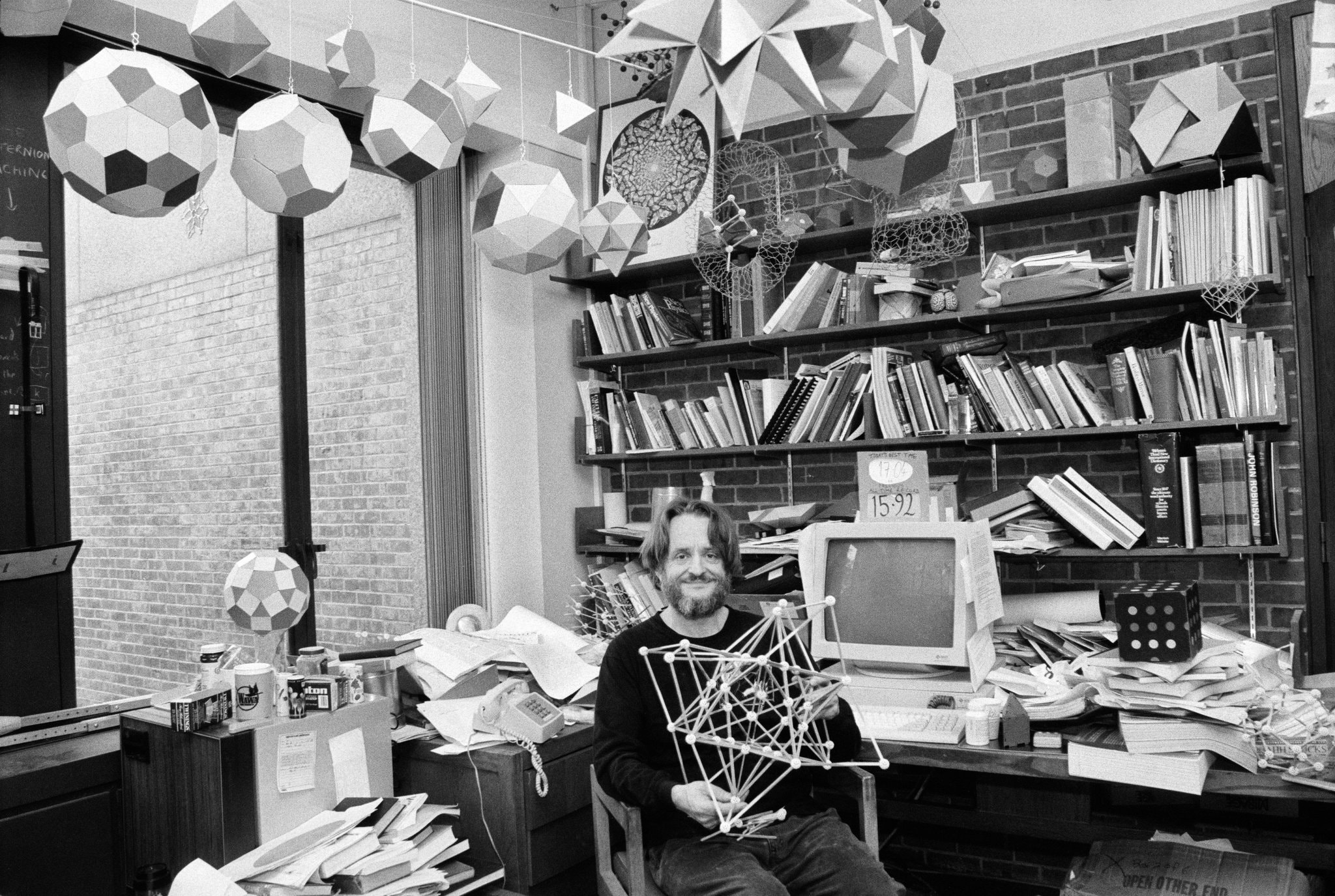 John Horton Conway with polyhedral models in his Princeton U. office, 1993 (photo by Dith Pran for The New York Times)

Covid-19 killed 13,000+ people last week, according to data from The Covid Tracking Project.  Among them was John Horton Conway.

It was xkcd’s animated gif “RIP John Conway” that first alerted me to his death. While saddened to learn of his death, I was struck by the poetic aptness of xkcd’s [Randall Munroe’s] tribute.

At times, Conway bemoaned the popularity of his game — over his numerous other achievements in pure mathematics. Although you can also find plenty of interviews where he patiently explains the rules and implications of LIFE.

Like many, I’d first learned of Conway (and “LIFE”), when I read Stephen Levy’s book, Hackers: Heroes of the Computer Revolution.

He’d described how students, working with mainframe computers at M.I.T. in the 1970s, became completely absorbed in Conway’s so-called game. Rereading that passage now, the rules of LIFE (highlighted below) now remind me of social distancing. Six feet apart vs. six feet under.

The principle of isolation and crowding in LIFE

LIFE was a game, a computer simulation developed by John Conway, a distinguished British mathematician. It was first described by Martin Gardner, in his “Mathematical Games” column in the October 1970 issue of Scientific American. The game consists of markers on a checkerboard-like field, each marker representing a “cell.” The pattern of cells changes with each move in the game (called a “generation”) depending on a few simple rules—cells die, are born, or survive to the next generation according to how many neighboring cells are in the vicinity. The principle is that isolated cells die of loneliness, and crowded cells die from overpopulation …

[Bill] Gosper first saw the game when he came into the lab … and found two hackers fooling around with it on the PDP-6. He watched for a while. …Then he watched the patterns take shape a while longer. Gosper …appreciated how the specific bandwidth of the human eyeball could interpret patterns; he would often use weird algorithms to generate a display based on mathematical computations. What would appear to be random numbers on paper could be brought to life on a computer screen.  A certain order could be discerned, an order that would change in an interesting way if you took the algorithm a few iterations further, or alternated the X and y patterns. It was soon clear to Gosper that LIFE presented these possibilities and more. He began working with a few AI workers to hack LIFE in an extremely serious way. He was to do almost nothing else for the next eighteen months.

It’s ironic, of course, that, because of the game’s analogies to life and death, it now seems inevitable that LIFE (the game) should figure so prominently in Conway’s online epitaph.

LIFE on an Osborne 1

I’m no coder, and I’m certainly no mathematician, but like many other readers of Martin Gardner’s column, I tried my hand at writing a computer program, to see what Conway’s LIFE looked like in action. The computer I used was a hand-me-down Osborne 1. (from my Mom!)

The Osborne 1 had a tiny black and white screen, however. And, while my first LIFE program, written in BASIC did work, the computer’s small screen size was a huge limitation. Could I improve the resolution? I remember being quite pleased with my solution at the time, but had nowhere to brag about it. Until now. 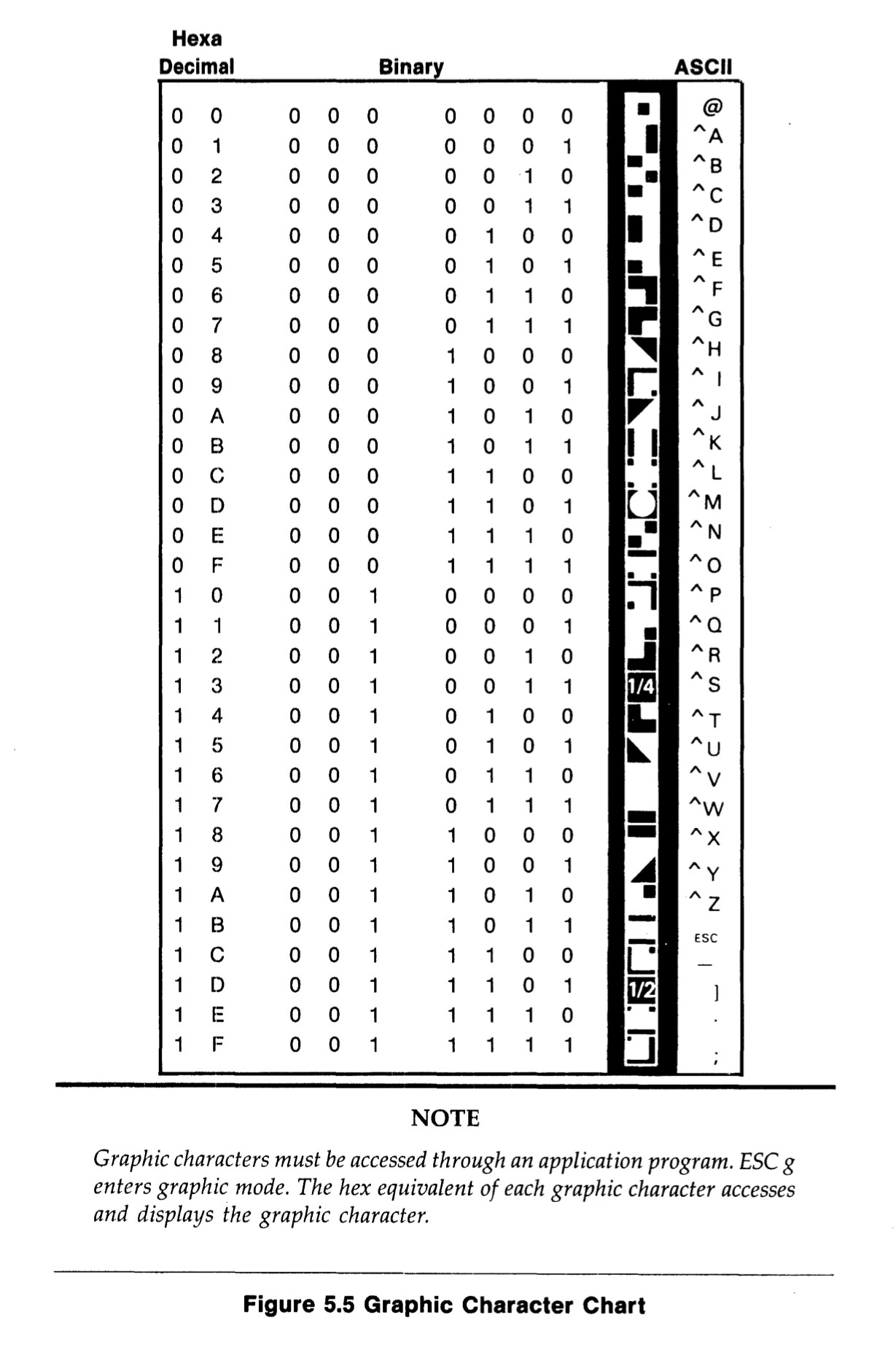 I noticed that, among the graphic characters available, were these 15 block elements:

In the first version of my Osborne 1 LIFE program, I wrote the code to calculate and display the iterations of each “cell” one at a time. But, by writing my code to calculate and display the status of cells in groups of 4, I was able to effectively double the resolution of my Osborn 1‘s wee, small screen. I just used these 15 “block element” characters, and I called this higher-res version, Microlife.

Of course, I no longer possess the floppy disk where I’d saved that code. Or the computer, capable of running it, for that matter. But I do still have the notebook where I first wrote it down. 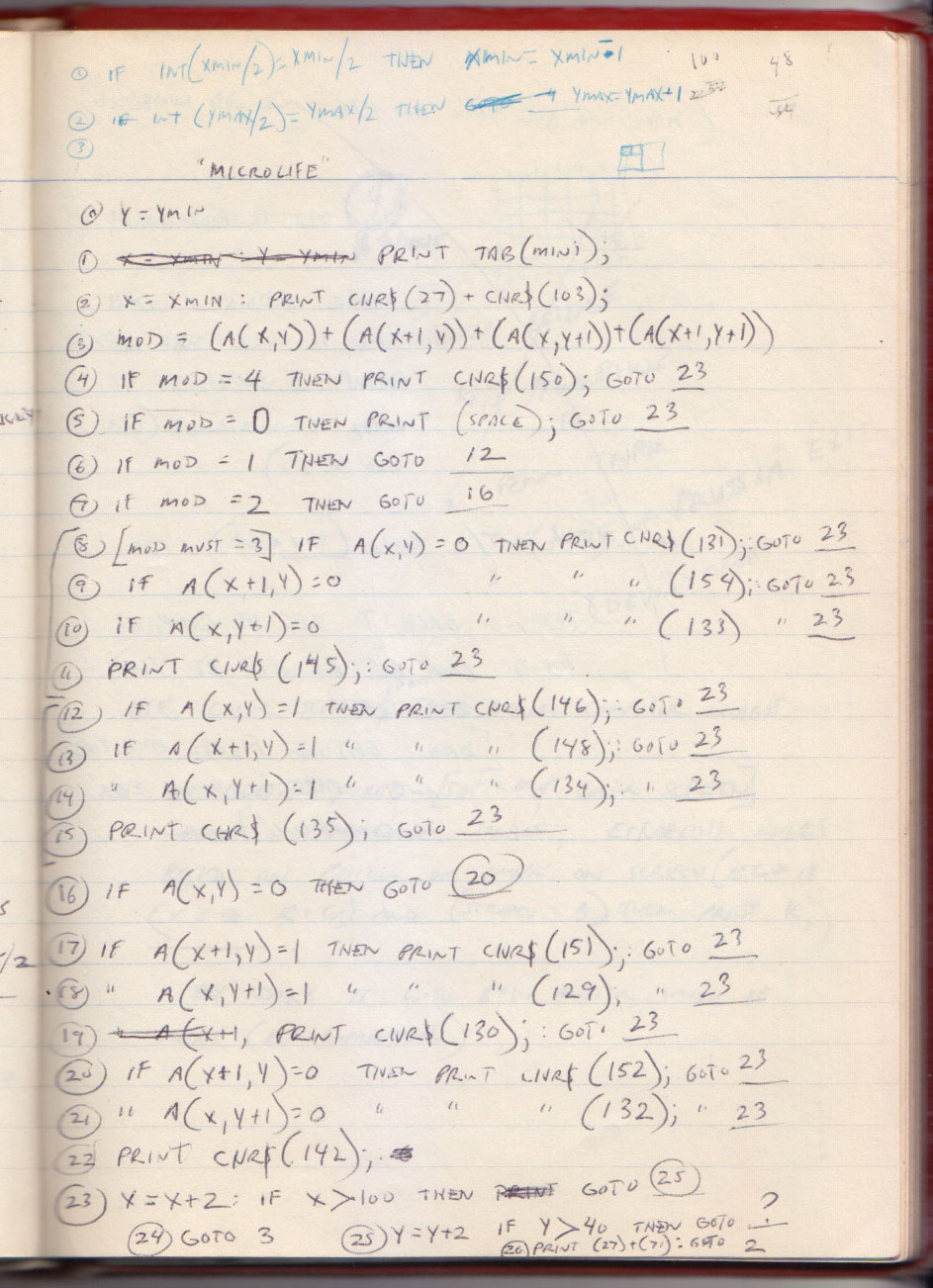 Can’t make heads or tails out of it now, but I recall getting some version of this working. Eventually.

Looking into it now, I see that I was not the only one to make LIFE run on an Osborne 1. (Mike Spencer, for example, also did it!)

I remember working on stuff like this when I was commuting home on the L.I.R.R. from a job at Christie’s in 1989. I’d also dabbled with an Osborne 1 Mandelbrot (fractal) set program, with similarly low-res screen results.

But I don’t want leave the impression that I only care about Conway’s game. I love seeing those polyhedral models in Dith Pran’s 1993 photo of Conway in his office. Anyone who (hypothetically) follows this blog, knows that I am not immune to the fascinating symmetry of polyhedral models.

Like Conway, I used to read the “Mathematical Games” column in Scientific American. And (like Conway) I once wrote a letter to Martin Gardner. (This was around 1984. I was writing to Gardner to tell him of some polyhedral discovery I thought I’d made. He very kindly wrote back, letting me down easy. My discovery, he felt, was probably not new, since so much work had already been done in this field.)

The figures below are from Conway’s collaboration with Simon B. Kochen: The Free Will Theorem. 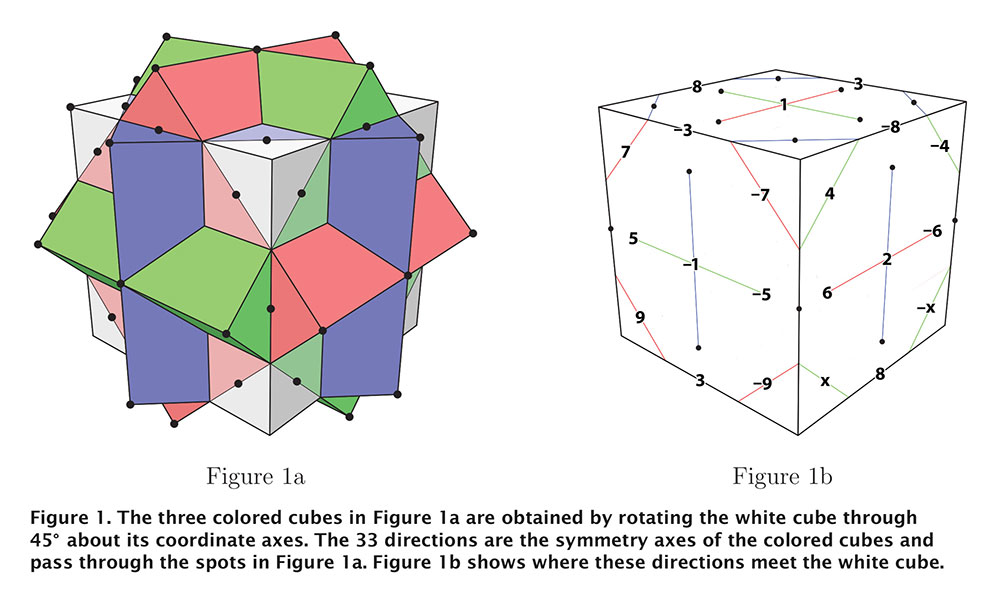 It has something to do with proving that certain elementary particles have free will. I can’t pretend to understand it, but these intersecting cube figures certainly caught my eye. (See also: Intersecting Milk Cartons)

Of all the online interviews with John Horton Conway, the series of videos hosted on the Simons Foundation website really stand out. They are organized, according to topics, into separate “chapters.” (The video embedded above is just the “highlights” reel.)

« Packaging in the News: our egg carton featured in Inc.
My pandemic packaging prize »