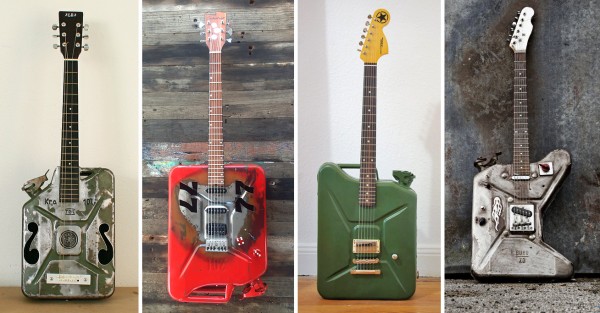 Just as the “Großdeutsches Reich” and the “Allied forces” each had their own version of the Wehrmacht kanister (or Jerrycan) so too are there German and English speaking musicians who play guitars made from these containers.

Above are 4 German guitars mage from the German style kanister.

Below are two “gas can guitars” made from the US version of the German “Jerrycan” design. (For some reason both of these American examples are red and played by sons sitting on couches.) 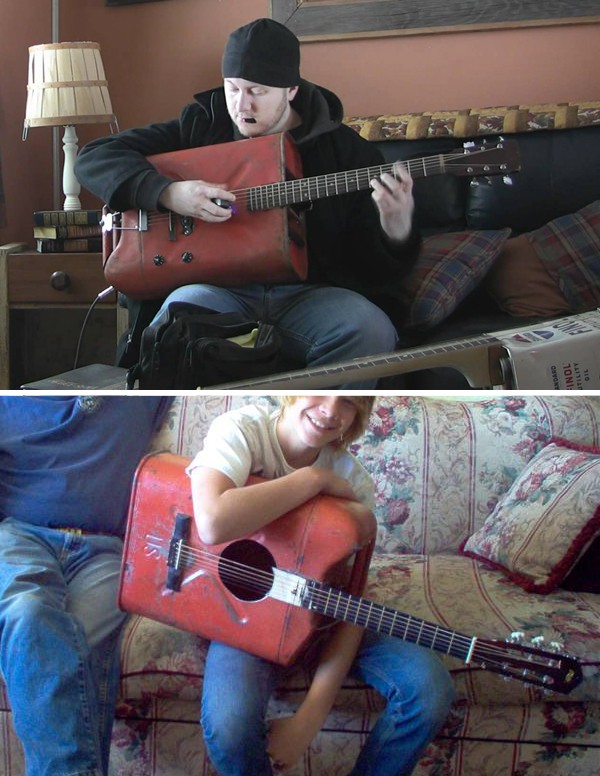 Above Rusty Wire playing guitar made by his father, Waylon; below photo of boy holding guitar via: Idaho Liberty

(More Kanistergitarren versus Jerrycan guitars, after the fold…) 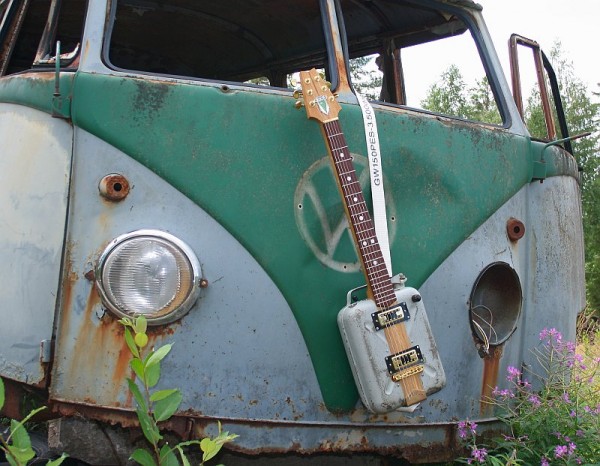 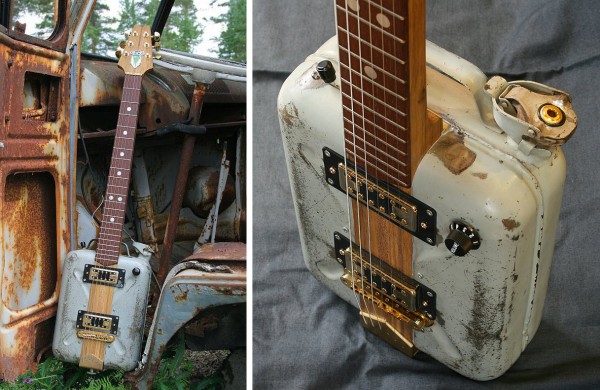 1. Peter Fehrmann (from Schwarz) has made at least four such Kanistergitarren.

The term “Gas Can Guitar” has already helped me a lot. Thank you [for that]. . .. I still have a few more [kanisters] from the 2nd World War … Blues instead of bombs!

from: the Gitarre Spielen Lernen forum

Note: the old VW bus and how the output jack is located in the spout of the kanister.

2. Saitenkraft Gitarren & Bässe from Bremgarten (which means they speak Swiss German rather than regular German) made the red Benzinkanister Gitarren (petrol can guitar) named HotRod #77. 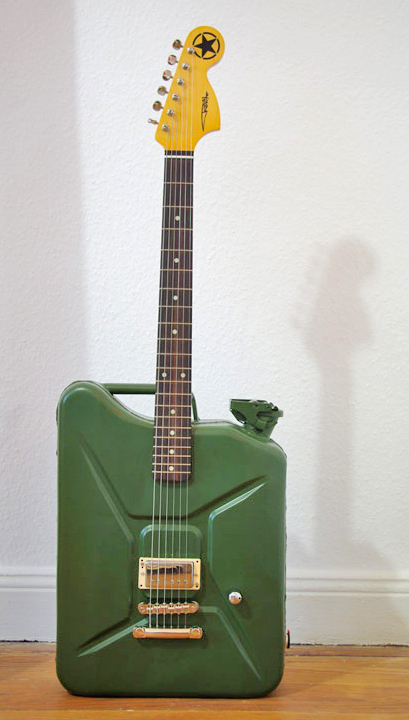 3. Amadeus Rokita (from Hamburg) made his Kanistergitarre sometime around 2012. Notably clean and pristine in category where most of the other guitars are deliberately “reliced,” this guitar was a submission in an 2012 homemade instruments contest held at Booooooom. 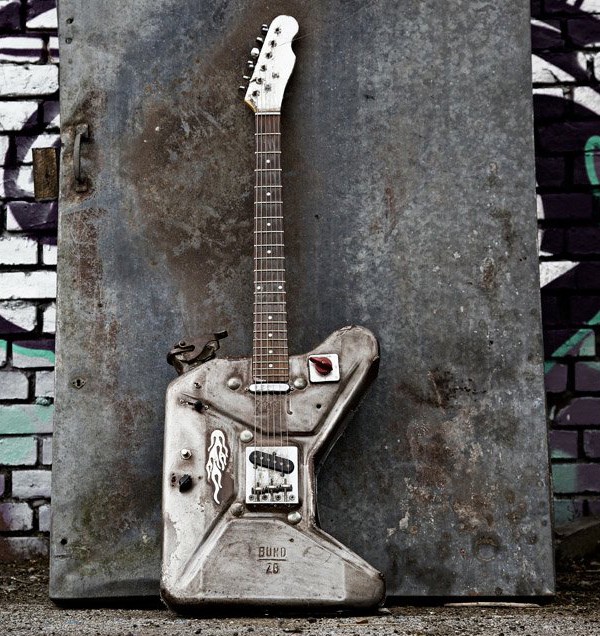 4. Rocco Recycle (from Cologne) has made his Kanistergitarre an integral part of his one-man-band. 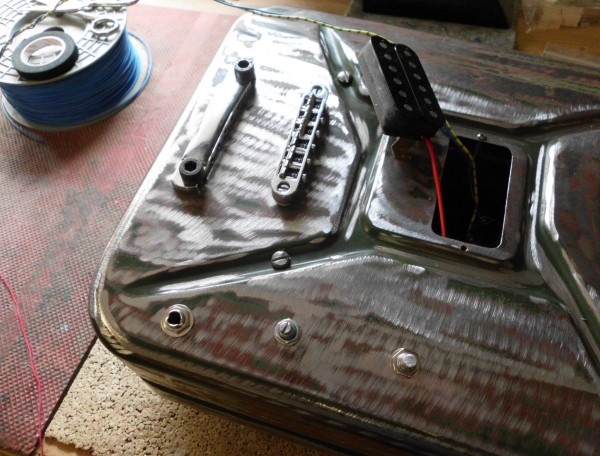 5. FLM Gitarren Schmiede (from Johannesberg) made the Benzinkanister Gitarre on the right.

(To me, the relicing on this one is a bit artless and excessive, as if someone just “went to town” with a steel grinder.) 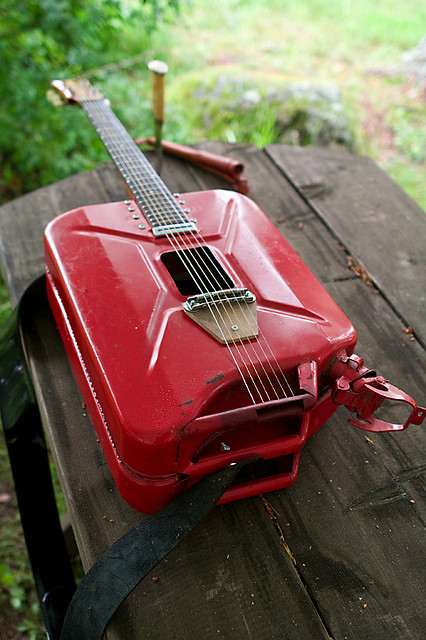 6. I don’t know who made this one although it is made from a kanister of the German design. The photo, taken in Finland, is from ZeiR’s Flickr Photostream.

1. Waylon & Rusty Wire playing their red “gas can guitar. Note that how the top of the Jerrycan is the at the tail end of the guitar. With the German designs only 2 out of 6 were configured this way. Most all of the other Kanistergitarren were the other way round.

With the American Jerrycan guitars, however, the majority (4 out of 6) were set up like this. 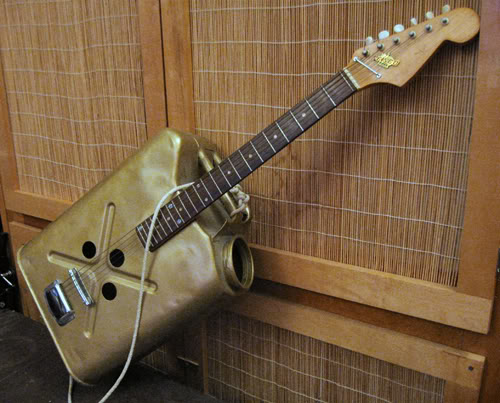 2. Tex Wynn (from Champaign, Illinois) made this Gerrycan guitar, described as a “Military Gas Can Dobro.”

This fine example sounds good, and the Teisco neck is unbendable if not precisely placed. The clothes line strap is a nice touch. The tone is actually different when the cap is on. … it gets 34 notes per gallon, 45 highway. 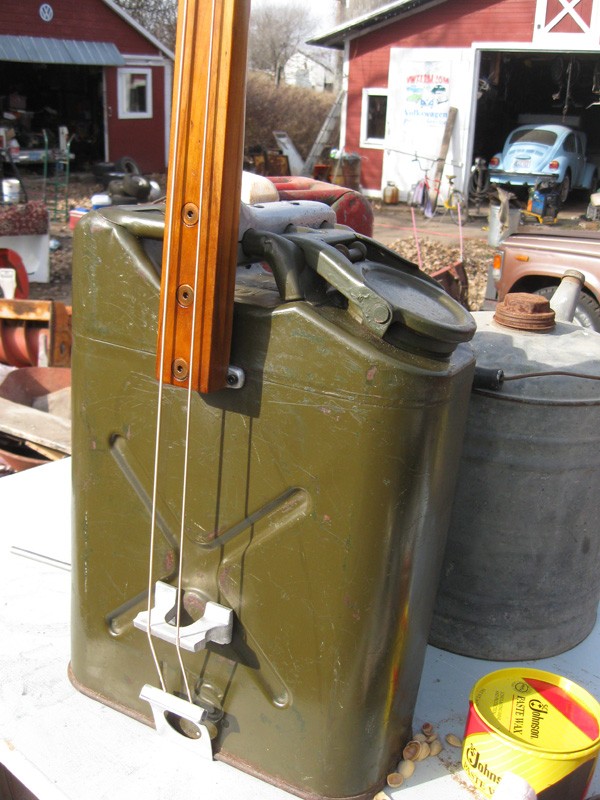 3. Dan Perry  (from Osceola, Wisconsin) made this 2-string “Jerry Can Bass.”

Here is a bass guitar I made out of a 1954 US Army water jug. This baby thumps even with the mouth closed.

(Note: another Volkswagen in the background) 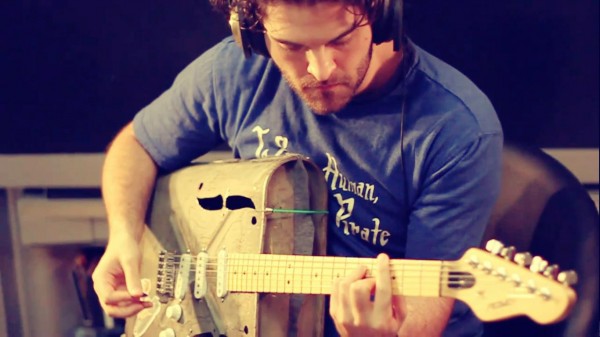 4. Logan Kendell has featured his Jerrycan guitar in numerous videos.

He’s one of the few musicians I’ve seen in this group who does not confine himself to the (slavish) replaying of traditional blues on his homemade guitar.

5. Esteban Bojorquez (from Santa Fe) has made a number of Jerrycan lap guitars. (Like Waylon Wire, his guitar has the can’s handles at the bottom.)

6. Markus Reeves made the Jerry Can bass above.

See also: Cigar Box Guitars and (my own) Edison Volt