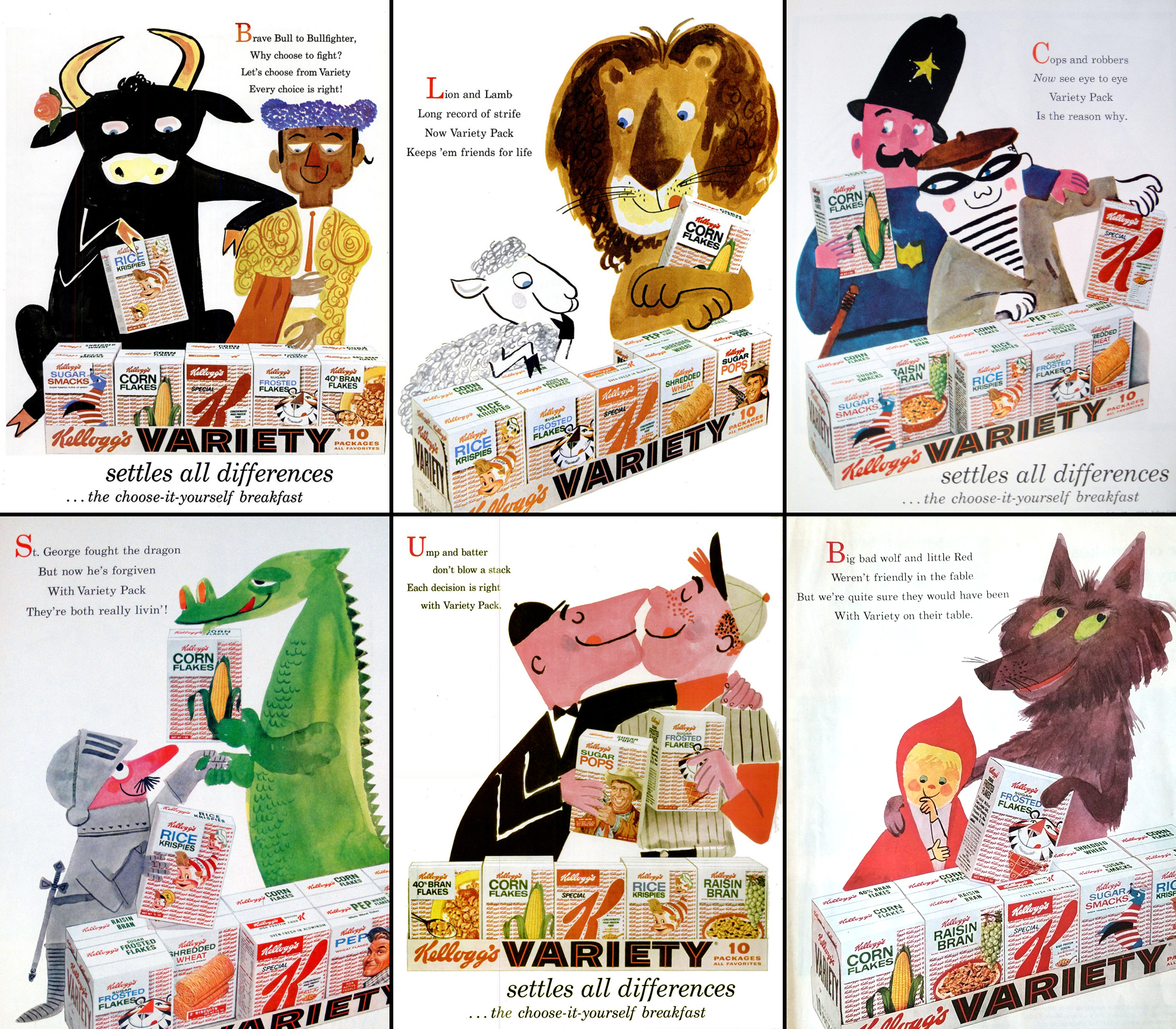 We ended our previous post with a 1959 commercial showing how Kellogg’s Variety Pack could satisfy a consumer with differing Jekyll-and-Hyde cereal tastes. A year earlier, in 1958 Leo Burnett (Kellogg’s advertising agency) created this “settles all differences” campaign.

Here, they illustrate the ways in which Kellogg’s Variety Pack “settles all differences” — between people who are actually different people. Although 5 of the 7 people depicted are not technically people. (Including, as they do: bull, dragon, wolf, lion and lamb.)

But the real mystery here is: who did the loose and loopy, watercolor/ink illustrations?

I found 6 print ads from the campaign. They published them all in Life Magazine, I believe. 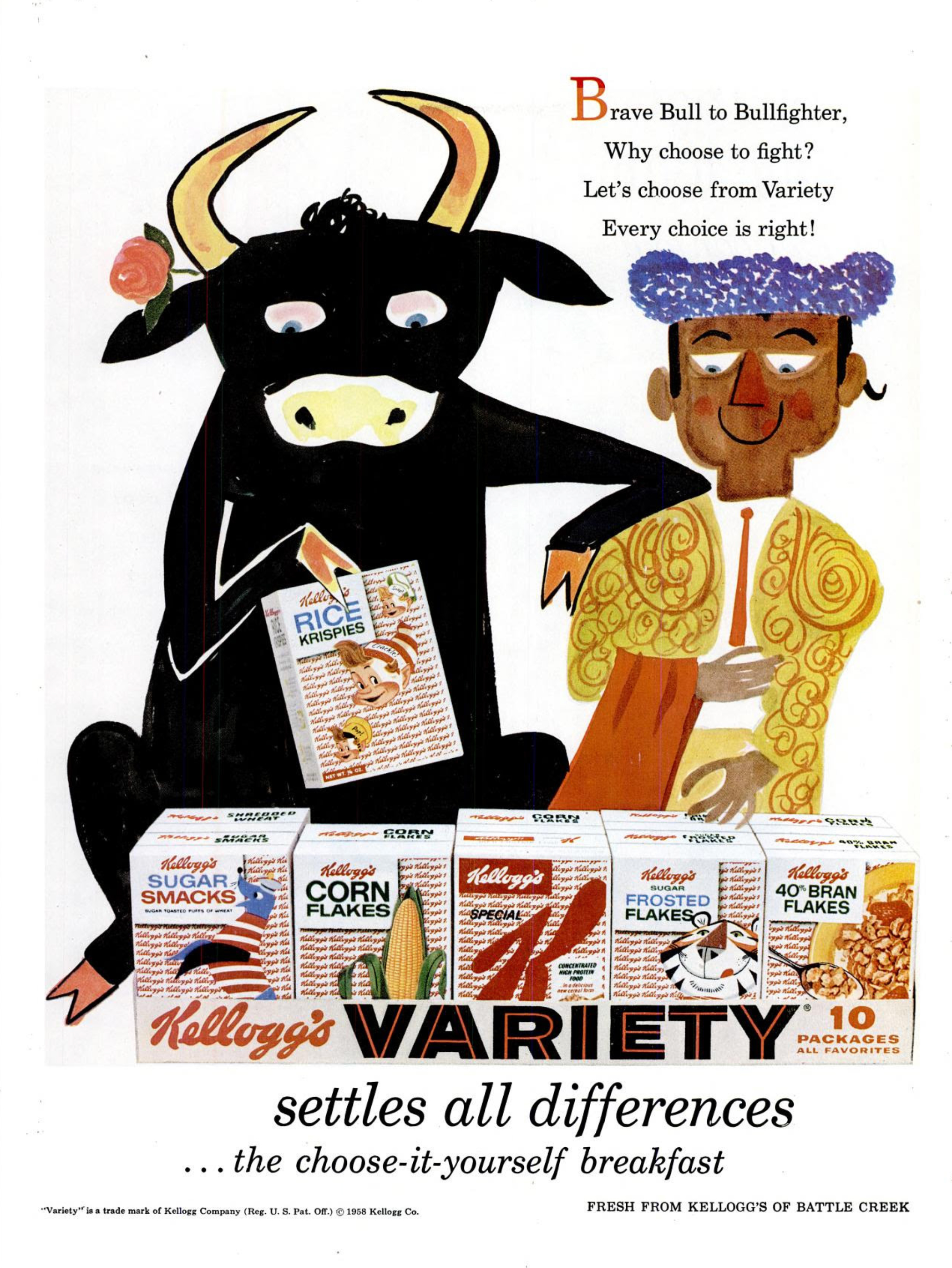 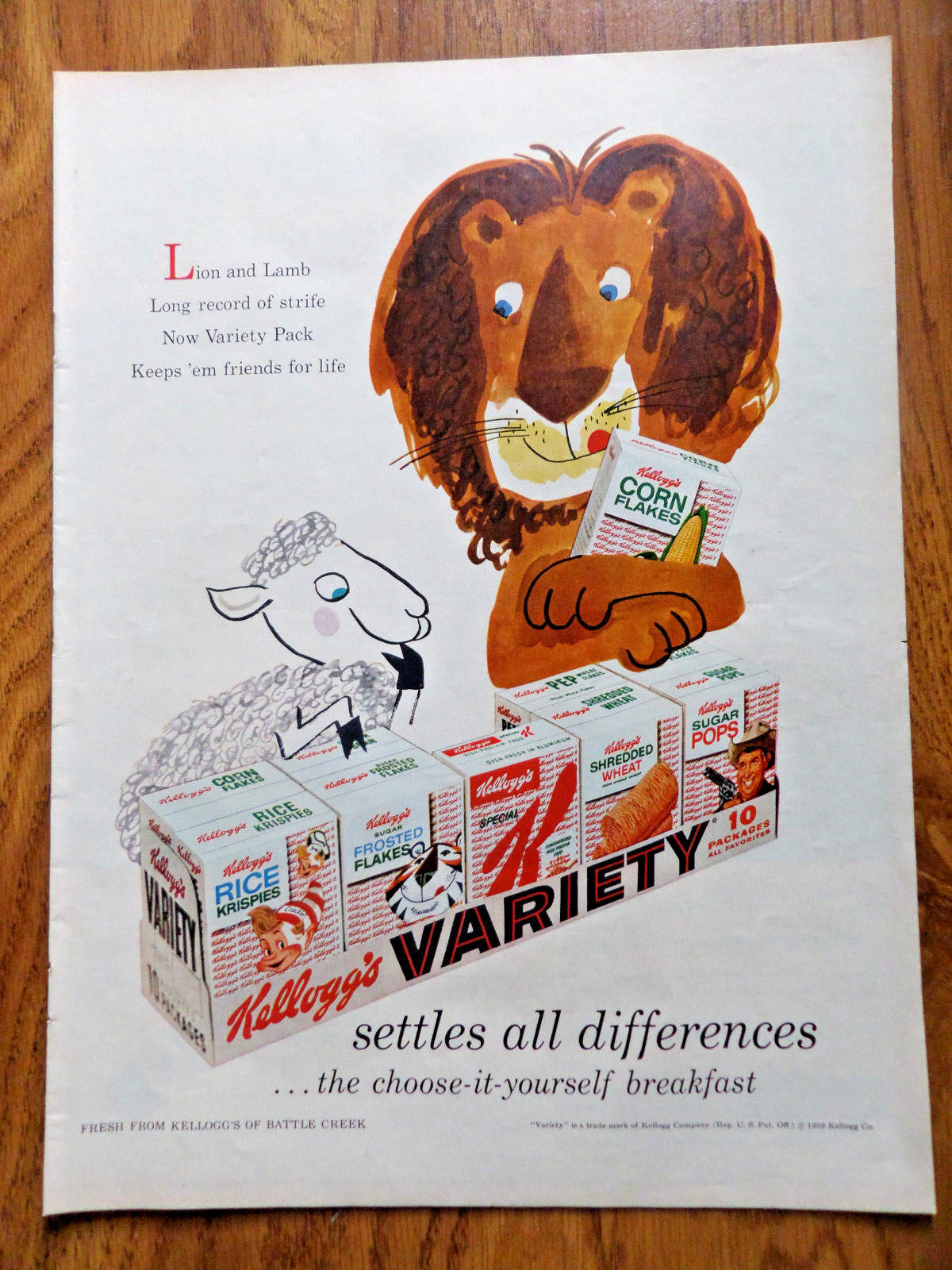 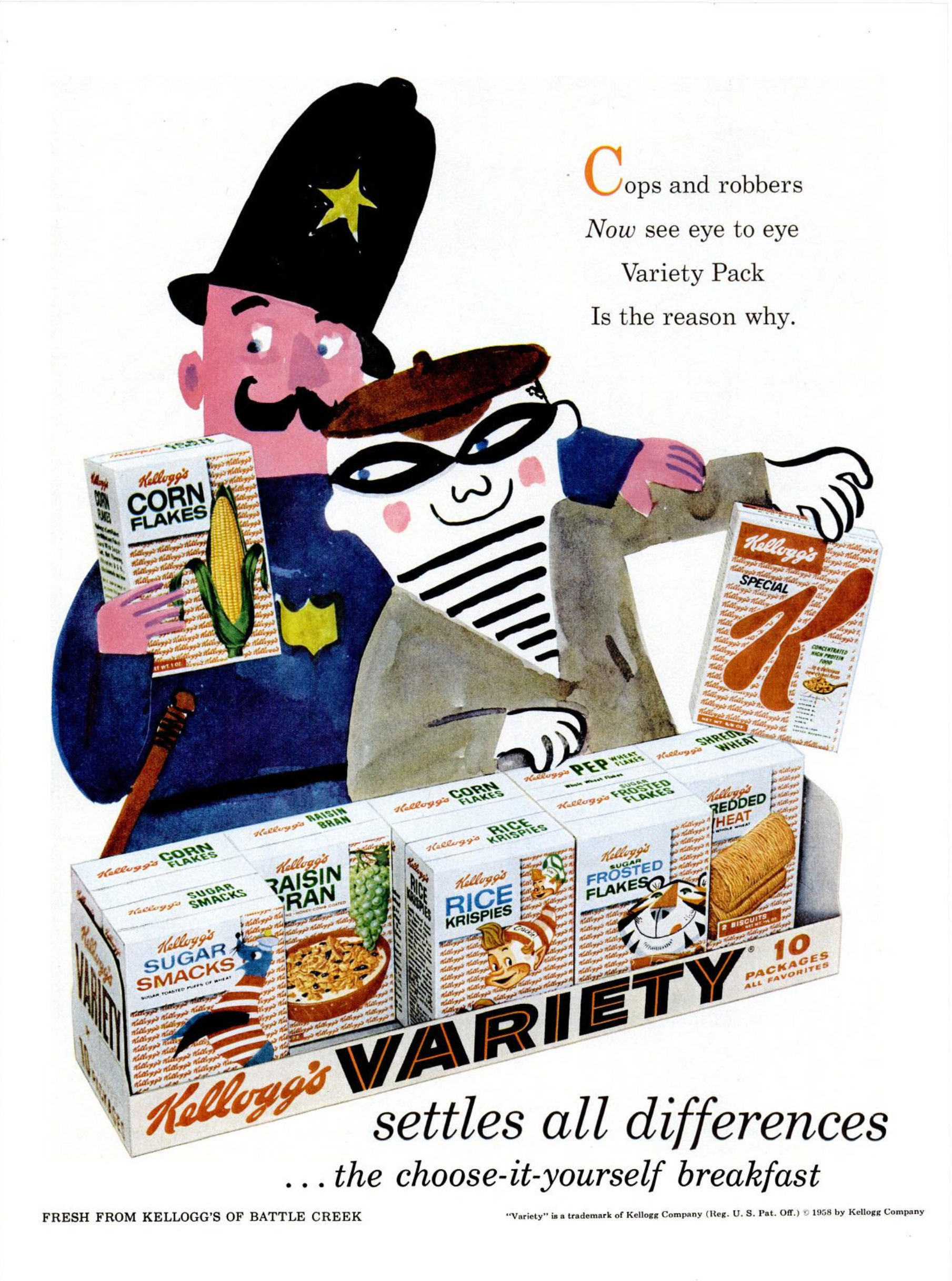 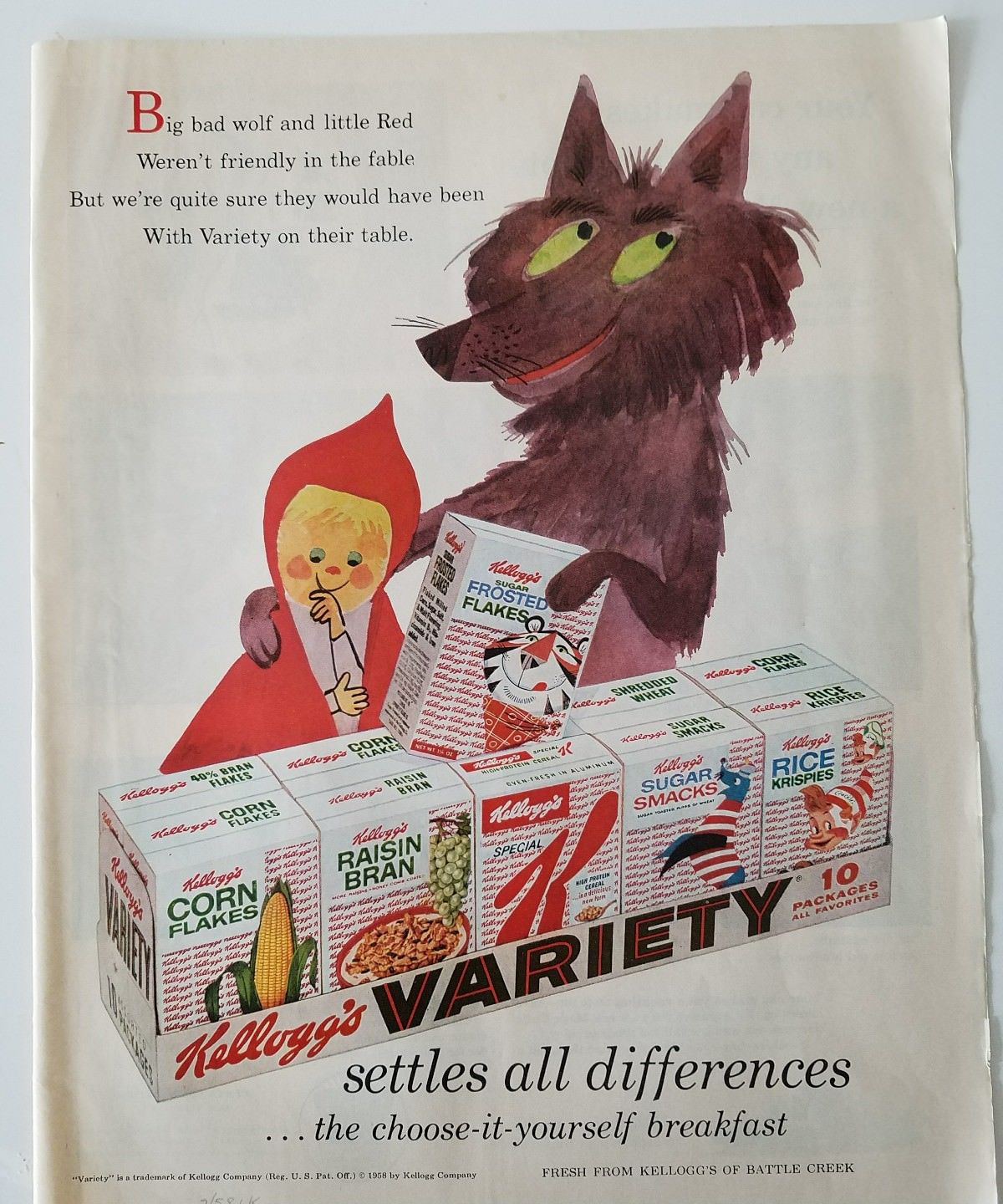 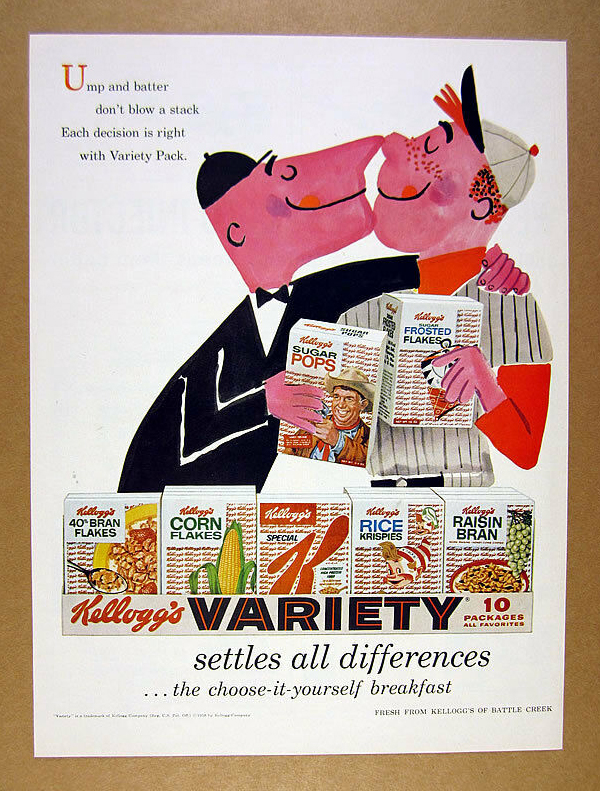 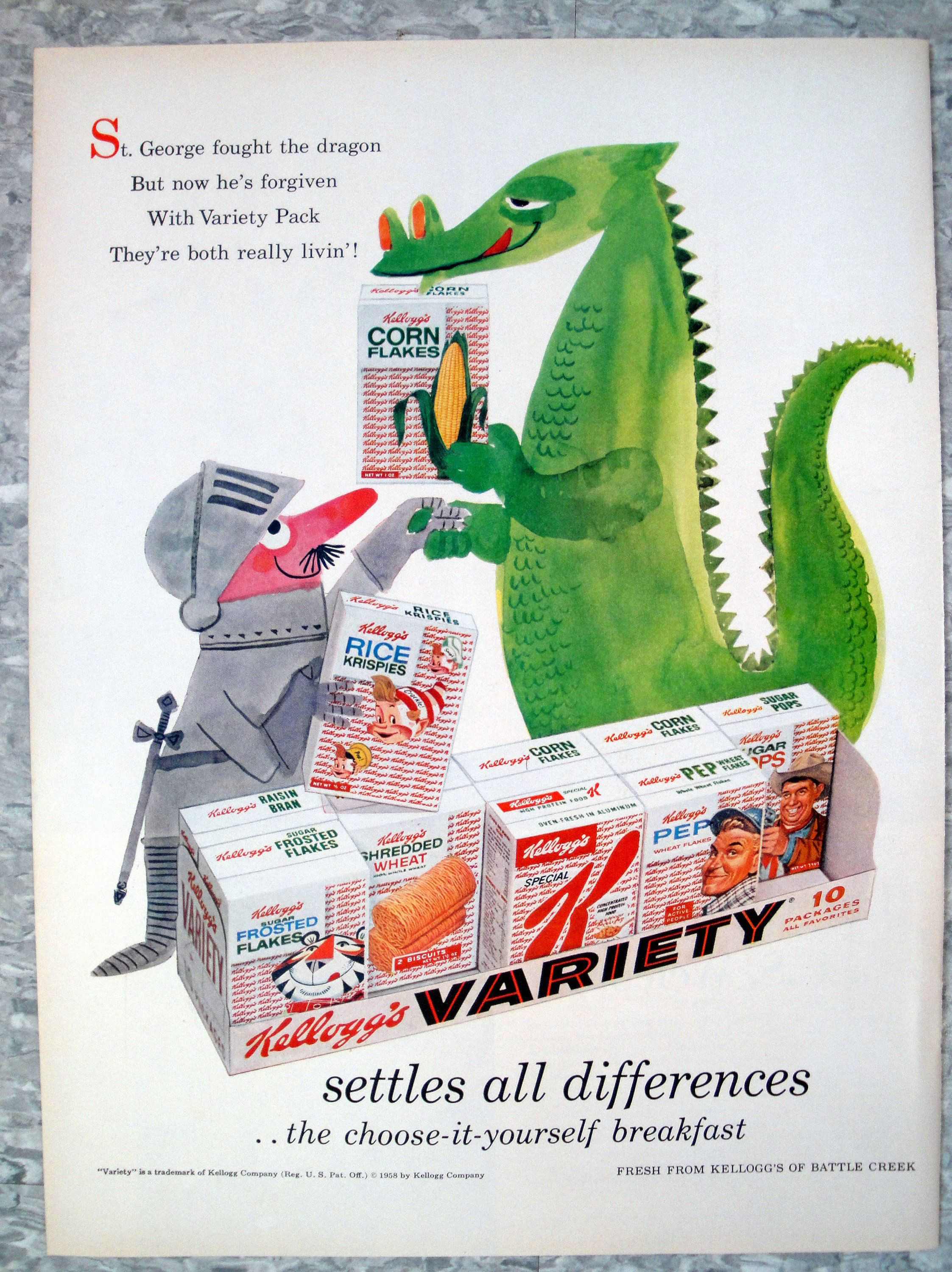 The Leo Burnett agency also made at least one television commercial for this campaign, using the knight and dragon characters above.

From Leo Burnett has come an excellent commercial on Kellogg’s Variety Pack. Animation is great. Voice choice, superb. Amusement, sustained, Still, the sell is there. There’s the mean dragon and the pure-hearted knight and you’d hardly expect two such different fellows to get along when they meet, there’s the Variety Pack and that settles all differences. At the breakfast table, anyway. Our personal Emmy Award to Playhouse Pictures, Inc. and to the agency handling the product.

I tried, of course, to find this commercial, but it doesn’t seem to be online anywhere.

Another thing I noticed about this campaign, was that the little boxes in Kellogg’s Variety Pack had a new “all over” logo repeat-pattern background. This turns out to have been part of Kellogg’s 1958 rebranding initiative. 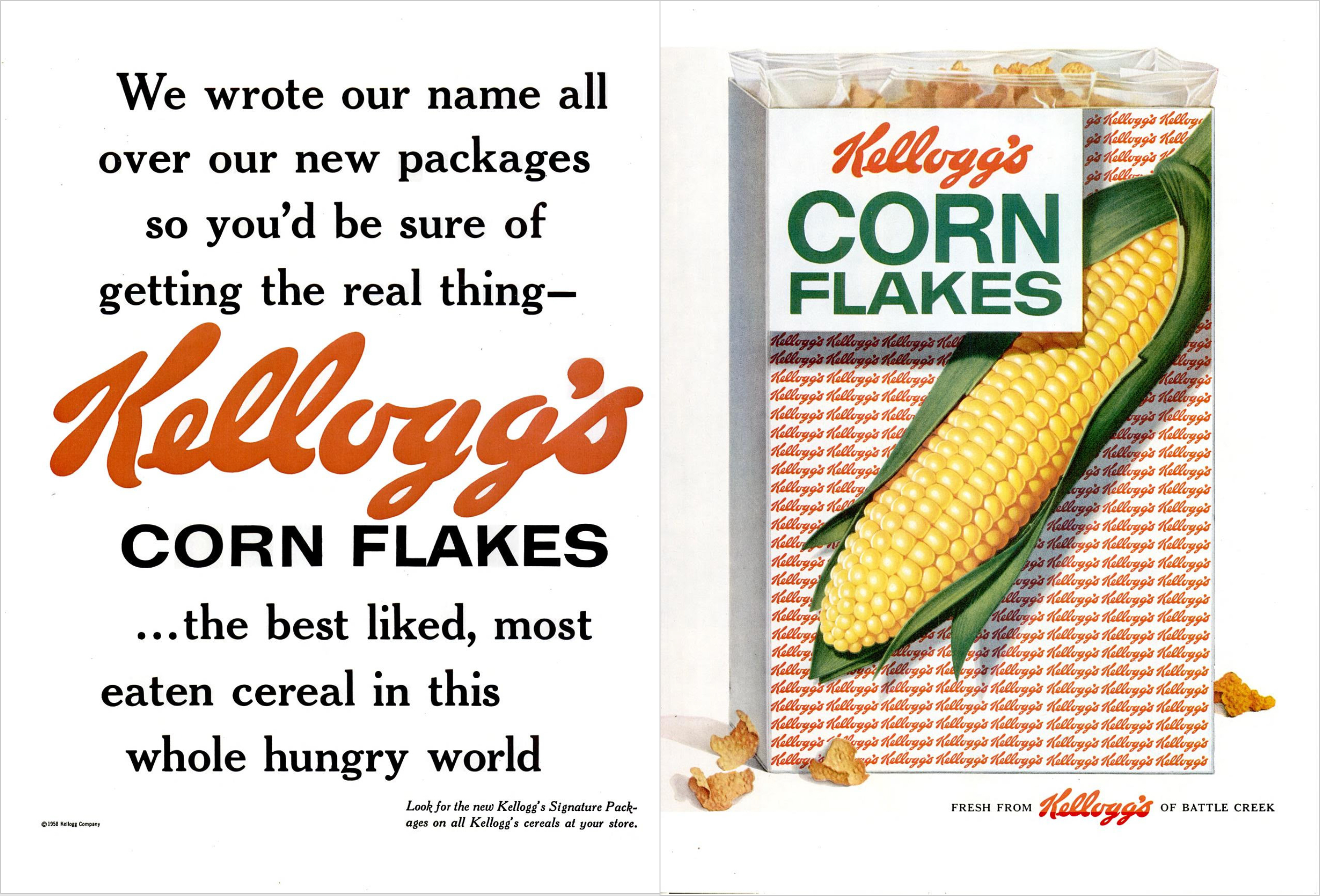 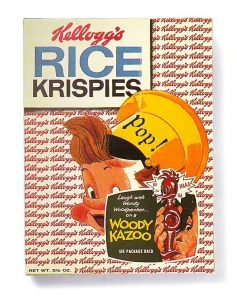 The Kellogg Company has changed its package for greater company identification. Each package will have the same background: continuous rows of the Kellogg signature. The various cereals will then feature different vignettes to set them apart from the others. For example, the corn flakes package will feature a large ear of corn against the uniform background.

Kellogg Co.
Battle Creek, Mich., announces a new line of “family look” packages for its cereal products. According to the company, the new-styled packs were adopted after careful consumer research in package design and have a quality appearance. Each package features wider corner cards “color-keyed” to highlight the name of each cereal and has Kellogg signatures in the background.

Note: the inset photo of the 1958 Rice Krispies package (above) is from Jerry Jankowski and Grant Kessler‘s book, Shelf Space.