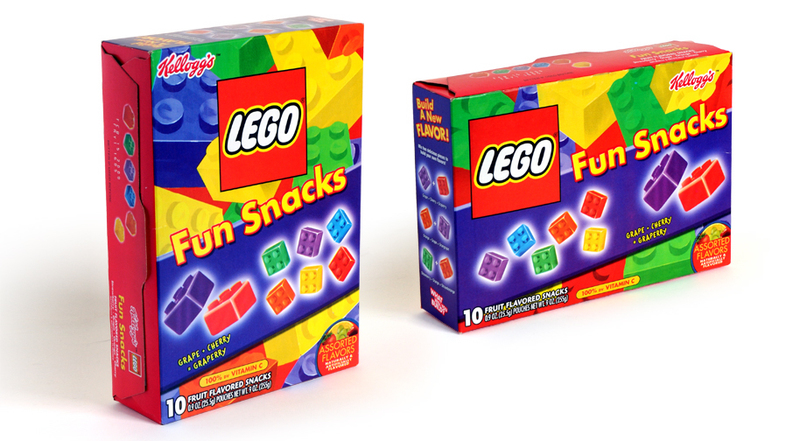 I found this box abandoned near the check-out counter at my local Waldbaum’s. A collaborative effort of Lego and Kellogg’s. I debated with myself about whether or not I needed to make an impulse purchase—(yes no yes no…)—but ultimately I succumbed to its poly-chromed allure.

Perhaps not the wisest of lateral cross-marketing moves to make an edible version of a toy that you gotta assume plenty of kids are already putting into their mouths. Maybe not such a good idea to blur the distinction between food and non-food.

(another picture and more to read after the jump…)

That being said, many consumers are disappointed that the product is not more like real Legos. Some complain that it’s a deceptive product because, while the selling concept seems to be all about combining flavors and, as they would appear to functioning facsimiles of Lego blocks, one might reasonably assume that they would snap together. As it turns out the bottoms are flat so snapping together is not an option. All of which leads me to wonder whether it was just too difficult to engineer or if it was because the company didn’t want to further tempt fate by making it possible for children to combine the edible and the non edible versions.

Kellogg’s has also come out with Eggo Lego Homestyle Waffles, which makes a bit more sense, at least linguistically.

About the box: I do have a soft spot in my heart for boxes like this that feature dual horizontal and vertical layouts, giving the “stock boy” or “stock girl”—or whoever it is, whose job it is to stock the shelves these days—more ways to build a new product display.