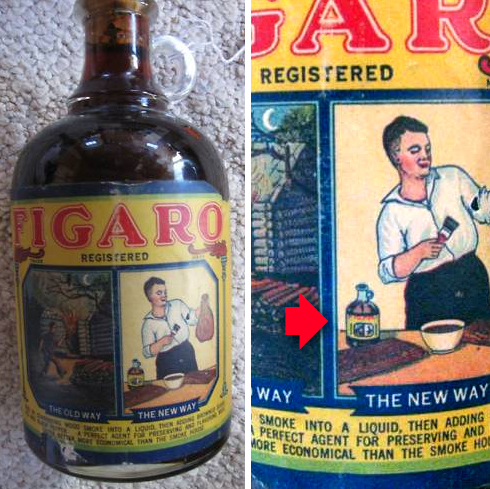 One of the liquid smoke companies whose bottles we featured in the previous post was Figaro out of Mesquite, Texas. (Now owned by Baumer Foods). Another early Fagaro label (above) features some before-&-after “old way—new way” illustrations that seem very similar to illustrations used by Kauser & Brother.

But the special feature of this label is the inclusion of a Droste effect bottle. (See: Droste Effect Packaging) I don’t have any closer view of this label, but it clearly duplicates the same bottle with the same before-&-after illustration, on a smaller scale. (And, presumably, on and on into infinity.)

On Monday, we’ll be featuring a few more Droste effect packs that have eluded me up until recently.

(Another photo with vintage Figaro jugs, after the fold…)