Remember, we mentioned the N.E. Thing Company last week and said we’d come back to it?

The idea of an artist or artist(s) acting like a corporation may seem pretty status quo these days, but back when it was founded—in 1966 by Iain and Ingrid Baxter—it was a radical and deeply ironic gesture. Officially a business entity, but at heart, a faux-company—in existence only for the sake of “fine art.” In that context, hiring an established commercial artist to design their logo was not the usual cut-and-dried business transaction. Instead, the logo—and the transaction, itself—exist primarily as conceptual art. By “conceptual art” I mean conceptual art as in: the idea alone would be sufficient. (Not “concept art” as in: a preliminary version of a proposed design idea, which may or may not be developed further.)

Rather than elaborate their own artistic trademark (the identifiable product brand that most artists develop), N.E. Thing Co. emulated the corporate practice of having a professional graphic designer create a logo for their documents and publications. N.E. Thing’s corporate logo, “PLEASE COMPLETE AND RETURN,” was designed in 1969 by Allan Fleming, who was the leading Canadian graphic designer of the time. Iain Baxter remembers that Fleming said a company like theirs required an open and ambiguous logo.  Below the request there are several dotted lines for a written response, and “N. E. THING COMPANY LIMITED” is then printed at the bottom. But nothing is presented to indicate what information is being solicited, resulting in an enigmatic call for participation rather than the direct communication of product information that most logos provide. 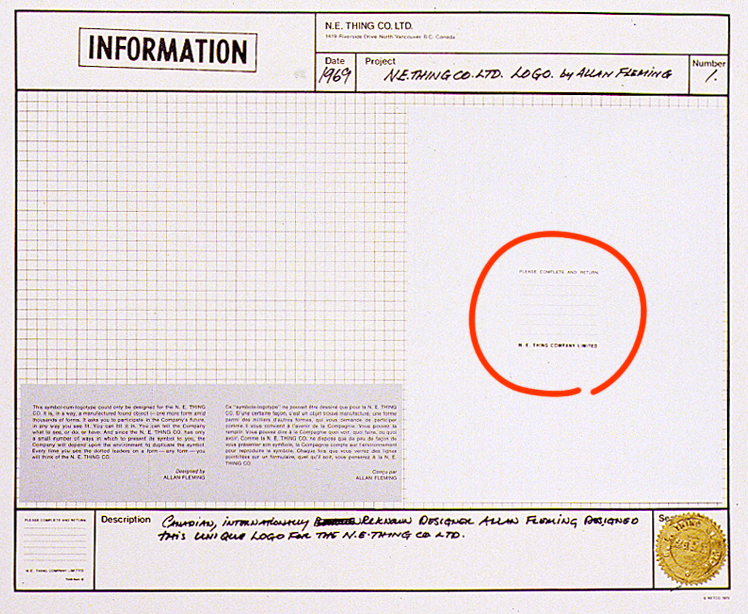 NETCO’s Information Sheet, documenting the creation of their logo states at the bottom: “Canadian, internationally renowned designer Allan Fleming designed this unique logo for the N.E. Thing Co., Ltd.” (I’ve circled the logo in red ) Via: The Center for Contemporary Canadian Art

(A Telex letter with NETCO’s logo, after the fold…)

In the sixties, before there were faxes or pdf files, there were Telexes and Telecopiers, which only companies had access to, but since NETCO was a bona fide corporation, it was free to use these new high-tech channels for their own faux-corporate purposes. Note how they refer to their own logo as a “thing”—(The NE Thing Company)—and how they tout it as “THE WORLDS ONLY TELEXABLE LOGO”

What was Allan Fleming’s attitude about this logo project? It’s included among the accomplishments in his bio and on his Wikipedia page. Did he suspect that NETCO’s project served to mock his own corporate graphic design practice? If so, he may have beaten them at their own game.

On the one hand, Fleming’s logo for NETCO seems too self-aware. The Baxters may have been hoping for a more ironic, corporate-looking logo. Instead Fleming gave them a logo that looked like a lot of conceptual art: a typewritten idea of a logo—as if graphic design didn’t even enter into it. (So unlike a normal logo, that in the Telex, above, NETCO apparently felt the need to point it out and identify it as such!)

On the other hand, some care was taken to choose a message that would justify perfectly when set in the mono-spaced font of a typewriter or teletype machine. 26 letters & spaces in “PLEASE COMPLETE AND RETURN”—26 letters & spaces in “N. E. THING COMPANY LIMITED”—and 6 rows of dotted lines with 26 periods in each. Most logos are to be reproduced exactly, and are never supposed to be “reset”—even in the correct font. Fleming’s design was more like a formula or a set of instruction for creating the logo.