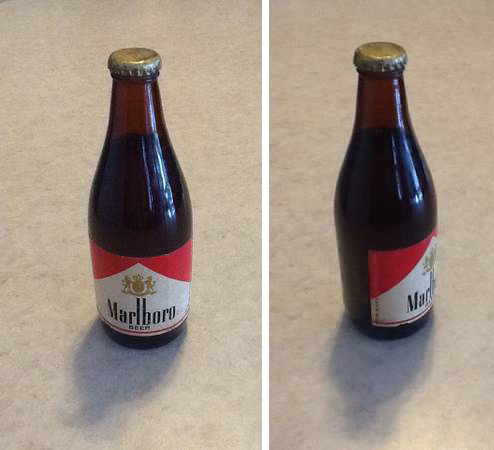 This just in: another bottle of Marlboro Beer is currently for sale on Craig’s List ($500).

Looks like you’d have to be in Dover, Pennsylvania to purchase it.

How do I even know about this? I have a Google Alert for “Marlboro Beer.”

Why do I care? Marlboro’s 1970s contemplated brand extension —extending their cigarette brand into the realm of alcoholic beverages— has been an ongoing interest of ours…

“…although the idea was reportedly killed in 1971, it has been periodically resuscitated.

Cooler heads always seem to prevail, but, I tell you, this idea has traction!”

The idea was (again) floated internally at Phillip Morris as recently as 1994.

The artifacts of their test marketing are oddly fascinating and pretty rare.

What do such objects suggest? A heightened brand loyalty, where devoted consumers purchase an array of matching possessions, each bearing the same trademark.

See also: “Our Rarest Can”