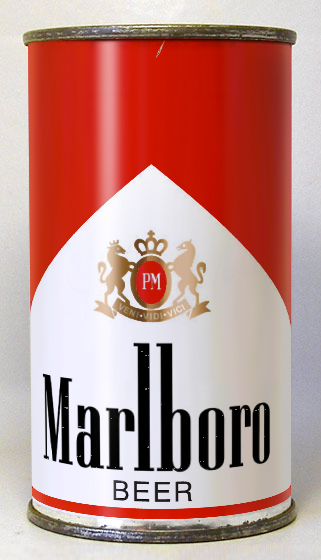 Just recently, I found out the answer.

“My brother and I had over 1200 cans in our collection…

Our rarest can was for Marlboro beer. Yes, beer. Philip Morris owned Miller Brewing Company. They tested a line extension in the early 70s. Dad worked for Continental Can Company. A few sheets of can blanks were lithoed for a packaging test — but Miller pulled the plug even before the testing started.

Since Dad knew we were nuts about cans — he trimmed out one of the blanks and had one of his guys run it through a production line during maintenance one night — and, voila, Marlboro beer can.

Probably the only one in existence as the rest of the litho sheets were sent back to the paint shop to dial in other designs before being scrapped.”

The only existing Marlboro Beer can, however, is not what I have pictured here.

This one’s just a Photoshop simulation, showing what I thought a vintage Marlboro Beer can might look like.

When I wrote to Pork Chop, hoping to track down a photo of the genuine article, he told me, “My brother has the collection back in Ohio. Hasn’t displayed them in decades. They’re all in boxes in his attic.”