I’m terrible at identifying faces and I’m not saying for sure that this is Martha Stewart, but just hear me out…

Stewart began a modeling career. She was hired and appeared in several television commercials and magazines, including one of Tareyton’s famous “Smokers would rather fight than switch!” cigarette advertisements.

from Wikipedia’s entry on Martha Stewart

Okay, but was it a Tareyton TV commercial or a Tareyton print ad? (The quote above is ambiguous.)

Many actors who would later become well-known for other reasons appeared in the Tareyton ads. Examples include future entrepreneur Martha Stewart, who appeared in a print ad, and actor Lyle Waggoner, who was featured in a television commercial in 1966.

from Wikipedia’s entry on “Us Tareyton smokers would rather fight than switch!”

If this Wikipedia entry is correct and there is a Tareyton print ad in existence in which Martha Stewart has a black eye, then I suggest it might be the one below, on the right: 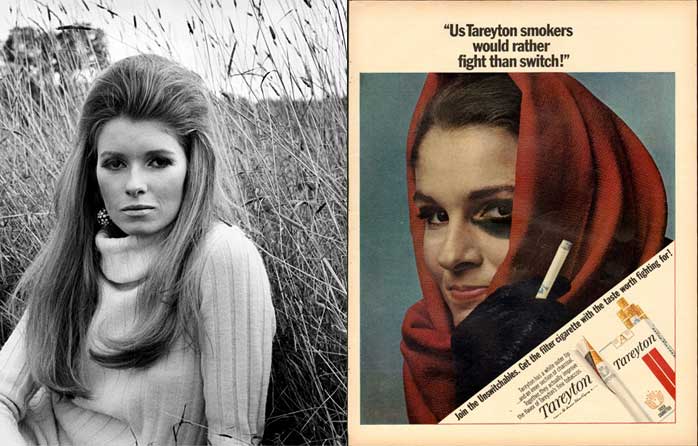 Some sources, however, suggest that it was actually a television commercial that Stewart had appeared in. In discussing Tareyton ads in general, MsBlueSky emphatically states on her Flickr site:

FACT: A then 25 year old Martha Stewart appeared in one of Tareyton’s television commericals in 1966 with Lyle Waggoner, a 70s TV actor.

That commercial is below, although I am unconvinced that the actress appearing in it is Martha Stewart. (Also: Stewart’s modeling career was supposed to have been while she was a teenager, so the “25 year old” assertion seems wrong, as well.)

In an interview with Larry King, however, Stewart does say that she appeared in a Tareyton commercial:

STEWART: During high school, I became a photography model. I was at the Stuart Agency (ph) and also at the Ford Agency. So I did modeling.

KING: Were you a successful model?

STEWART: Yes, I was. I mean, I wasn’t what is considered successful now with million-dollar contracts, but I made $35 an hour to start. Then I went up to $50 an hour. That was a lot of money in those days.

KING: Were your family happy with this?

STEWART: Oh, they were very happy and allowed me to save my money for my education. So it was all saved. And I remember making some commercials. I did a Lifebuoy soap commercial.

STEWART: I played a young married. Can you imagine? As I say, I was 15-years-old. And then I did a Tareyton “I’d rather fight than switch” commercial, you know? And then I practiced smoking…

KING: You did a cigarette commercial?

STEWART: I know. I tried to smoke for a week. And when I finally made the commercial, all I had to do was hold the cigarette like that. So…

KING: You didn’t blow it out in that phony fashion?

That being the case, I think it’s more likely that the video below is the Martha Stewart Tareyton commercial in question.

But go ahead. Tell me I’m wrong.