In an alternate universe called Canada, it was the “Maverick” brand that wore Frank Gianninoto’s famous design. Rather than “Marlboro.”

Why change the product’s name from “Marlboro” to “Maverick”? Because, in Canada, the trademark “Marlboro” is owned by a different tobacco company: Imperial Tobacco.

Over the years, Philip Morris had tried various strategies to overcome that hurdle. Substituting the name “Maverick” was something they tried in the 1970s. 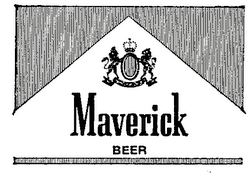 The Maverick cigarette pack on the left came from Jim’s Burnt Offerings. The Maverick Beer bottle on the right was sold on eBay.

I’ve written a few times about the 1970s test marketing of Marlboro Beer. I never realized, however, that Philip Morris had also test marketed a Maverick Beer. (Not until I discovered photos of the Maverick Beer bottle.)

The cigarette pack and the beer bottle shown above, however, are the only surviving examples that I could find online. Judging from their rareness, therefore, I’m guessing that Philip Morris’s “Maverick” brand was on the market for a very short time. Although there’s some literature that seems to suggest otherwise…

In a 1971 profile of Marlboro Man, Darrell Winfield, the author reveals that the famous Marlboro Man also appeared in Canadian commercials for Maverick.

“I look at it as a job,” Darrell said. “They tell us they want to make these things authentic so there’s not a lot of bull in them. They’re the ones with the hard job, trying to satisfy a lot of people who have a lot of different ideas.” The ban on TV cigarette advertising has cut into his income, but residuals still come in from Canada where Marlboros have another name and he rides through Maverick country.

In a 2013 mystery novel, Maverick brand cigarettes are also mentioned, and their discarded packs provide the key clue to a murder.

A partly crumpled cigarette pack was lying on the sand among the jutting cigarette butts; Marlboro… But no, it wasn’t either; I looked more closely and saw that the lettering was wrong, though the design was right. M-a-something. Maverick. That’s what it was.

from Donald E. Westlake‘s 2013 mystery entitled, Don’t Lie to Me

In his 2014 book, Canadians: a narration of events, William Irish recalls working on commercials for Imperial Tobacco. So why did they make commercials in the American “Marlboro Man” style?  The strategy was more to create consumer confusion, rather than to actually sell cigarettes. They wanted to undermine Philip Morris’s effort to penetrate the Canadian market.

The film production house director received a phone call… [requesting] that the director be on a plane to Calgary the following day …because the commercials he had to shoot must be completed very quickly.

An explanation on the plane included the information that a person who watched the activities of American owned Marlboro Cigarettes for Canadian owned Imperial Tobacco, had … warned Imperial Tobacco that Marlboro was going to introduce their cigarettes into Canada. A strong and well advertised brand name like Marlboro would do Imperial Tobacco’s brands considerable damage. The ‘spy’ … claimed Marlboro’s first step would be to run test commercials...

… Marlboro had the advantage of time but Imperial Tobacco had an interesting advantage of its own. A smart Imperial executive had, long ago, purchased the rights to the name Marlboro in Canada. If the American Marlboro was going to invade Canada, they had to give the product a different name.

… The Canadian cigarette ads were shown on the same day… as the American cigarettes. The stores displayed the two packages side by side. Smokers were confused and both products were dead in a week. The Americans withdrew, their attempt to launch a cigarette into the Canadian market failed.

Reading the first two quotes, “Maverick” sounds like a well-established Canadian cigarette brand. Irish, on the other hand, tells us that the “Maverick as Marlboro” brand lasted only 1 week.

(Next time we’ll dig deeper into the extensible cigarette/beer branding of Philip Morris and Miller Brewing.)