Which set me to thinking about how candy is so often shaped like pills and capsules. Why do we conflate candy and medicine?

To help parents persuade children to take their medicine, manufacturers have (for a long time) added sugar to it, making it more palatable and candy-like. As Mary Poppins sang, “A spoonful of sugar makes the medicine go down.”

Pretend doctor kits from the fifties, in addition to plastic stethoscopes, frequently featured bottles of candy “play medicine” like this vintage “Country Doctor” kit from Ebay. 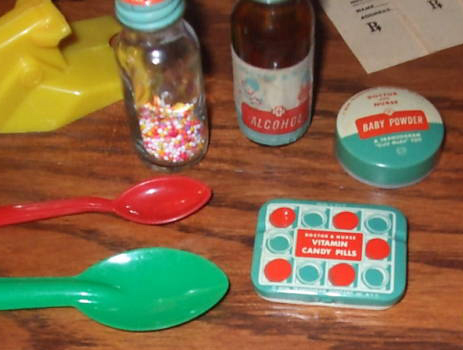 When my youngest brother was still a toddler—before the introduction of child-resistant caps—he helped himself to a bottle of children’s chewable, orange-flavored Bayer aspirin. Luckily, our quick-thinking baby-sitter discovered him and (with her finger down his throat) helped him to throw it all up into the toilet.

That close call must have been sometime in the early to mid-1960s. In 1970 our US congress passed the “Poisons Prevention Packaging Act” (PPPA) which requires that products, potentially harmful to children, be packaged in a child resistant manner.

Interesting, the term child resistant. Like a lot of people, I’ve been calling those caps “child-proof” and therein lies one of the reasons why child-resistant caps have turned out not to be the life-saving safety measure they were intended to be.

In an article from the 1984 issue of American Economic Review, “The Lulling Effect: The Impact of Child-Resistant Packaging on Aspirin and Analgesic Ingestions,” economist, Kip Viscusi [1] cites an unfortunate, unforeseen effect of the PPPA regulations in leading consumers to overestimate a package’s safety. In a 2007 interview, Viscusi had this to say about safety caps:

In the case of safety caps… there were mandatory safety cap requirements on aspirin and other potentially dangerous products that children might try to get into. So what happened? Because parents thought the safety caps made them risk-free — in fact, they were first called “childproof” caps by the Consumer Product Safety Commission — people started leaving the bottles around in the open rather than storing them, giving kids greater access. In some cases, people left the caps off altogether because they were so hard to grapple with every time you wanted to open the bottle.

Spring 2007, Region Focus
(Region Focus is the quarterly magazine of the Federal Reserve Bank of Richmond)

A 2005 CBS News feature (link to video clip here) showed how easy it was for children to open a
wide range of supposedly child-resistant packaging. Calling this type
of cap “child-proof,” is the sort of misnomer that may mislead parents
into dropping their guard.

Are we underestimating our children’s ability to open tricky packaging, if we trust child-resistant caps? Part of the problem is that candy and pharmaceuticals have been so historically intertwined [2] that children naturally tend to confuse the two.

(More after the jump…)

Candy manufacturers, hoping to capitalize on childhood “pretend play,” often package candy to resemble other things. Sometimes this is harmless, as when candy looks like another type of food—(candy as soda pop, for example). But sometimes the possibility of childhood confusion has more serious ramifications.

Maybe toothpaste and band-aid ingestion by children has not been a problem for SweetTarts Squeez and Hubba Bubba “Ouch!” Bubble Gum. In the case of pills and candy, however, the resemblance is already so striking—and so much medicine is so pleasantly flavored—that to package candies to look even more like medicine—or medicine to look even more like candy—is something that most manufacturers seem to be avoiding these days. But there are some exceptions. 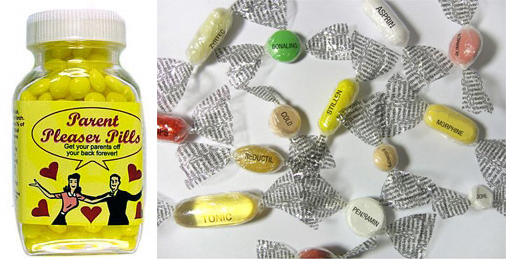 And then there is “We’re Not Candy,” the 1985 public service announcement from the Poison Control Center…

1  Another quote from Kip Viscusi about safety caps:

The empirical evidence regarding the effect of safety caps on child poisoning is more clear-cut, largely because it derives from a situation in which people erroneously believe that the safety devices are more effective than they actually are. The majority of aspirin child poisonings have been from safety-capped bottles even to a greater extent than would be predicted by the safety cap share of aspirin sales. Related products, such as acetaminophen, exhibited an increase in risk levels once safety caps were introduced as consumers apparently became more lax about the need to be more protective about medicines generally.

2  The classic example of a “placebo” is the “sugar pill”— a candy disguised to look like a pill.

Also, as a diabetic I keep “glucose tablets” on hand in case of low blood sugar. Although they wouldn’t be particularly harmful if a child were to eat them, knowledge of their existence might further blur the line between candy and medicine.