In 1979 photojournalist, Susan Meiselas took a photo of a Nicaraguan rebel throwing a molotov cocktail made from a Pepsi bottle. (The full photo can be seen on Meiselas’s web site or on the Magnum Photos site.)

In 2003 Joy Garnett based a painting on a detail of the photo that she found online. What happened next was the sort of brouhaha that only the internet makes possible. Meiselas’s attorney sent Garnett a cease and desist letter on the basis that Garnett’s painting violated Meiselas’s copyright. In keeping with the prevalent “information-wants-to-be-free” internet ethos of the times, artists from all over the world began posting artworks based on Garnett’s painting, itself based on Meiselas’s photograph. (Some did so under the mistaken impression that it was Pepsi who was trying to censor Garnett’s use of their logo.) Read all about it here.

It’s iconic because it’s ironic
My interest, of course—(aside from the packaging-as-deadly-weapon thing)—is the little matter of the Pepsi logo. One of the things, that I think makes Meiselas’s photograph so iconic is the Pepsi logo. The political implications of a multinational soda-pop company’s package being used as a revolutionary’s weapon is hard to miss. I think this is certainly part of what attracted Garnett to this image in the first place. I also think it’s interesting that the photo has come to be referred to as Molotov Man. (Is this an intentional reference to Marlboro Man?)

(More to read and some other molotov packs after the jump…)

In 2005 both Meiselas and Garnett spoke at a symposium on copyright & context issues. Their presentations were subsequently made into an article for Harper’s Magazine.

In Meiselas’s portion of the article she revealed that Garnett’s use was not the first appropriation of the image. Indeed the image had taken on quite a life of it’s own within Nicaragua.

I made the image in question on July 16, 1979, the eve of the day that Somoza would flee Nicaragua forever… the man is throwing his bomb at a Somoza national guard garrison, one of the last such garrisons remaining in Somoza’s hands. It was an important moment in the history of Nicaragua—the Sandinistas would soon take power and hold that power for another decade—and this image ended up representing that moment for a long time to come. I don’t think it was published anywhere at that time, and it was only published in my book a year or so later, but in the years since, the image has been subjected to many kinds of reappropriations, most of which, far from condemning, I have welcomed.

Susan Meiselas
ON THE RIGHTS OF MOLOTOV MAN: Appropriation and the art of context
Harper’s Magazine, February 2007

Among the reappropriations that Meiselas cites are murals, posters and “matchbox covers celebrating the first anniversary of the Sandinista revolution.” Unlike the Garnett painting, however, the Pepsi logo does not figure prominently in these. The man holds a rifle and a generic flaming bottle. The logo’s been omitted.

Product photographers like to speak of “hero shots”—(very flattering and compelling product photos used in advertising)—but for those who sought to commemorate their revolution, definitely not the sort of hero shot they had in mind. It may have been a flaming Pepsi bottle that was thrown at the garrison in 1979, but the availability of Pepsi in Nicaragua was not what they wanted to commemorate in these depictions. In this context, a generic bottle was apparently deemed more heroic.

Loaded metaphor
Given the existence of the hand-grenade-shaped  Bomba bottle, I’m sort of surprised no one’s made an energy drink based on the idea of a molotov cocktail. (If you know of one, please let me know.) Perhaps it’s too loaded a metaphor. Any bottle can be used to make a firebomb. Perhaps, beverage makers wisely do not want to go there. Still, the molotov cocktail has shown up as a theme for some products… 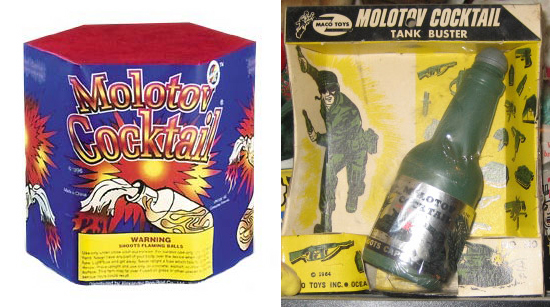