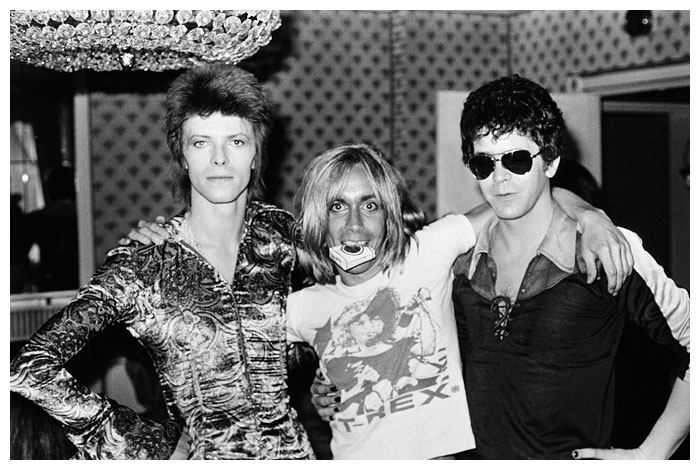 Mick Rock is having an exhibit at the Show Gallery, here on Staten Island, “Glam!” which opens tomorrow night. As the photographer who “shot the seventies” it isn’t hard to find iconic album packaging that he had a hand in. David Bowie’s Space Oddity. Iggy Pop’s Raw Power. Lou Reed’s Transformer. I guess I could have made a photo-triptych of those 3 covers and used it at the top of this post. But I decided to go instead with the photo above, of the three of them all together during glam rock’s heyday. (A copy of this photo fetched $1,250 at a Christie’s auction in 2008.)

For me, these three are pretty much the leading glam-rock guys of the period, but, hey, if you’re into Marc Bolan he’s here too… (on the T-Rex t-shirt that Iggy’s wearing).

What does this photo have to do with packaging? Note the cigarette pack in Iggy’s teeth. I don’t know if Bowie ever smoked (he did), but we’ve already covered tobacco & Lou Reed. (See: Arents Medal)