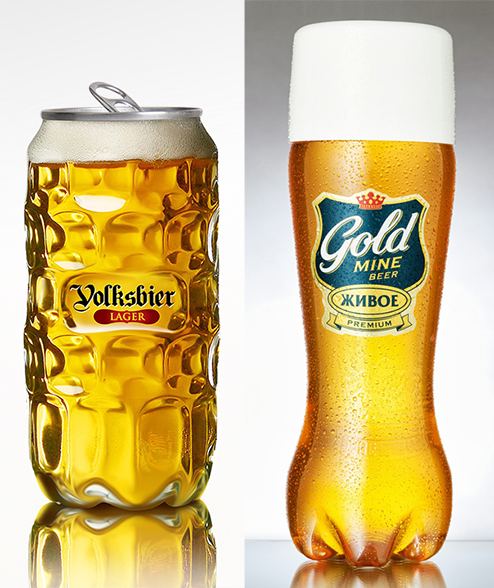 Beer cans that are designed to resemble glasses of beer have become one of our “pet” topics, but these are the first two I’ve noticed that are made of transparent PET (polyethylene terephthalate) with petaloid bases.

The two recent examples above, were designed by different firms. They have similarities and differences, but each won a 2014 Gold Pentaward.

(More about each of the PET packs, after the fold…) 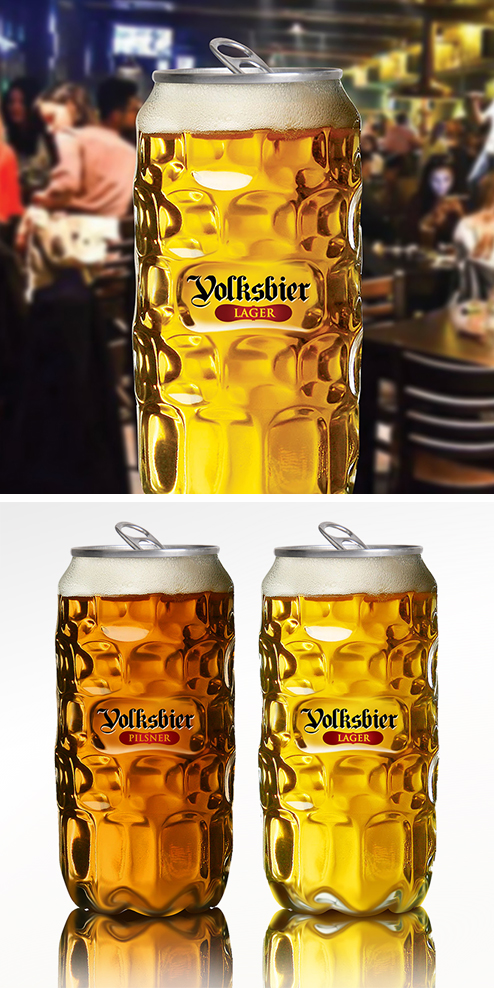 Volksbier was a proposed PET container, designed by Remark Studio and winner of a 2014 Gold Pentaward for beverage packaging concept.

Similar to the hybrid bottle/cans we wrote about in 2009, except that Volksbier’s proposed PET container is given an ornamental, beer stein style texture.

“We felt the need for a new beer package that can be disruptive on shelves and increase appetite appeal.

The idea came from combining two increasing trends in the beer market: PET and can packaging.

Because beer is such a popular drink and the most appreciated brands have German origins, we develop the brand name, Volksbier, and also considered the popular pint shape.

The PET material specification used for the container should be chosen to be as close as possible to the appearance of glass.”

One small quibble I have with these images is that they rely heavily on an idealized Photoshop moment—(the moment after the imaginary container is shaken up.)

The foam head, which was key feature in the earlier beer-glass-resembling beer cans, would not necessarily be present if this were an actual beer container at rest on the shelf. 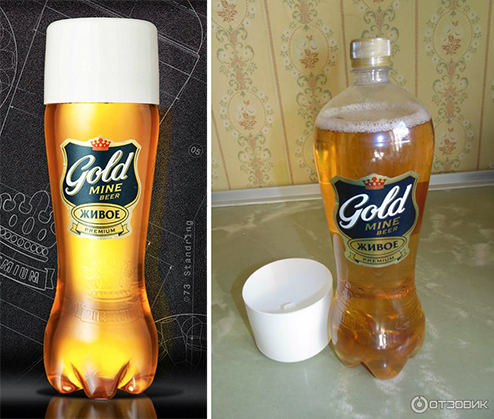 In their case, the beer’s “foam head” was simulated with a cylindrical, white plastic cover, concealing the neck of the bottle and the cap.

“To emphasize the idea of freshness — as if the beer was just poured at the bar, we decided to create a PET bottle in the shape of the glass.

… recently, our beer-glass/PET-bottle saw the light of day — not as limited edition, but as the product of mass consumption. Consumers appreciated it not only for the design, but also for the functionality: they use the foam-cover as a glass.”

Gold Mine Beer also came out with a traditional beer-glass-resembling (straight-walled) beer can in 2011. (via: Unipack)