They considered launching a “Benson & Hedges” beer, for example. And they did launch a “Player’s” beer, although it didn’t look like the bottle above.

The company was making these moves, partly to take advantage of its 1969 acquisition of Miller Brewing. But it was also based on the insight that cigarettes and beer were, in many ways, similar products.

“We were in the tobacco business with Philip Morris. What we knew about beer would not have filled one of our seven-ounce pony bottles. But when you examine beer and cigarettes, you realize that they both have a great deal in common. Both are low-priced, pleasurable products made from agricultural commodities that are processed and packaged on high-speed machinery. Both are advertised in much the same way, and are sold to many of the same end-use customers, through similar distribution channels. Your beer drinker and your cigarette smoker are often the same guy.”

Thomas B. Shropshire (while Vice President & Treasurer at Miller Brewing),
Beer is his Business, Ebony, March, 1979

Of course, when Shropshire says that beer and cigarettes are both “pleasurable products” he stops short of acknowledging that they are both addictive.

Here Fletcher explains the company’s reasons for trying to extend its cigarette brands to cover beverages like beer and even soda. He cites their beverage trademarks for Marlboro, Benson & Hedges and Maverick (which he calls “Canadian Marlboro”).

He says that Philip Morris should retain ownership of these trademarks. Not Miller Brewing. Why? Because they’ve argued in the past that “cigarettes and beer are related products.” 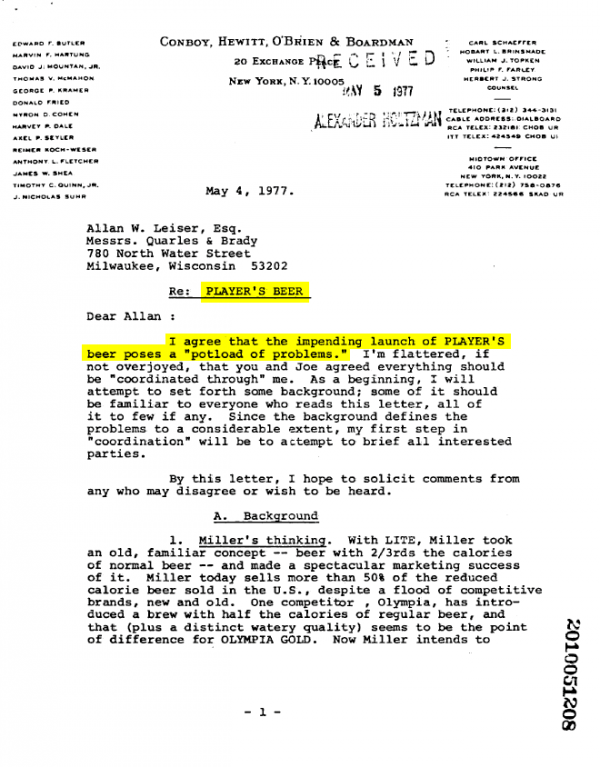 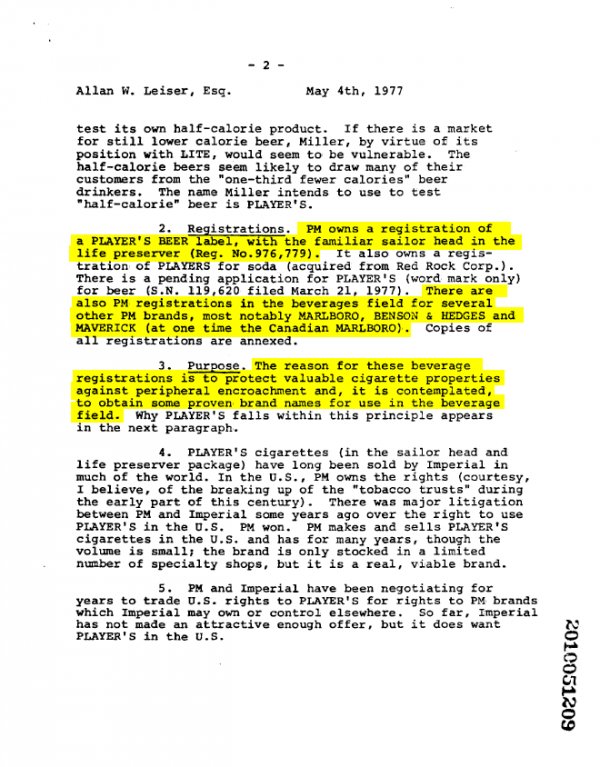 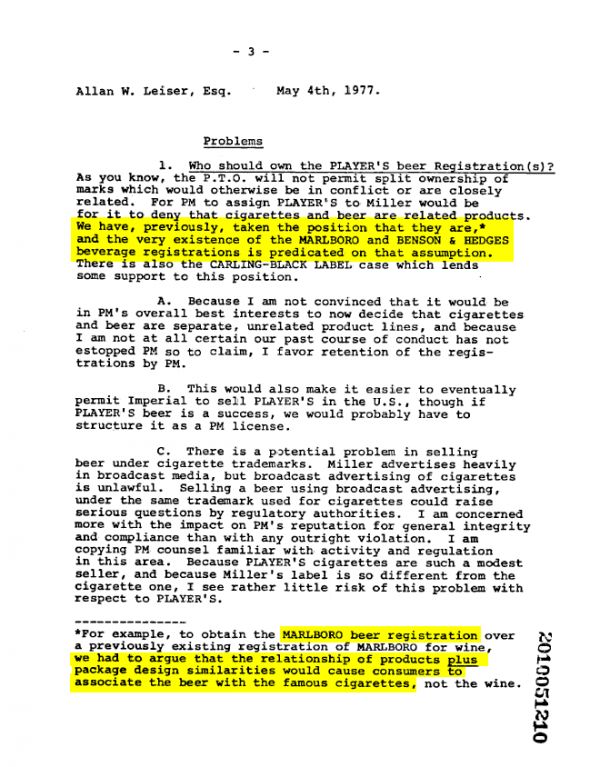 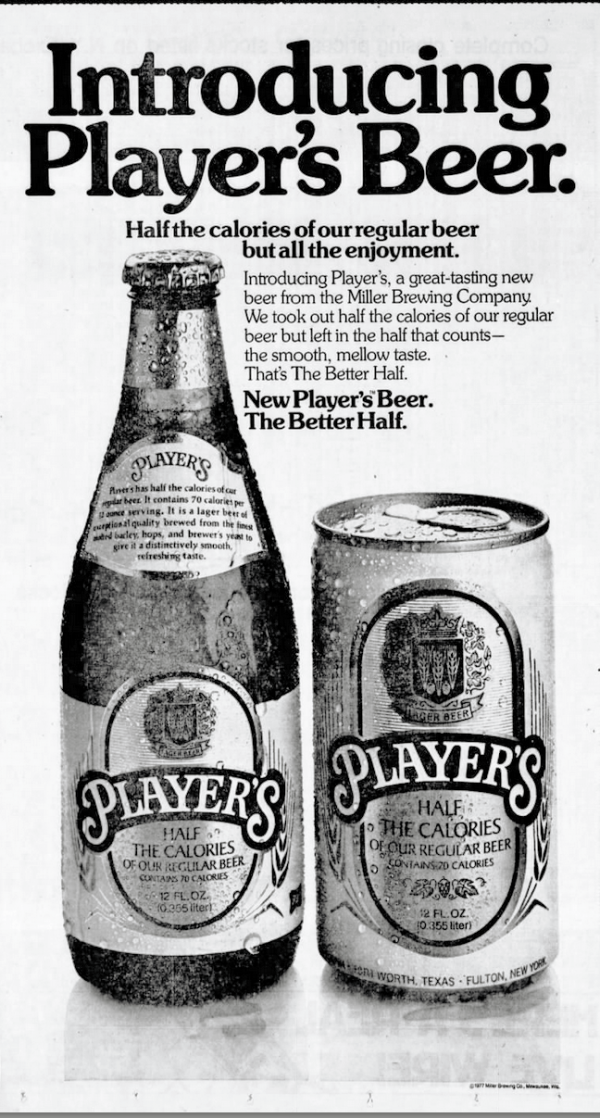 Fletcher comments that the Player’s Beer is “so different” from the cigarette label. Philip Morris’s ad (above) from a Nebraska newspaper (The Lincoln Star) shows us what the label looked like. Miller Brewing placed the ad in 1977 and test marketed Player’s Beer in Lincoln, Nebraska that same year. 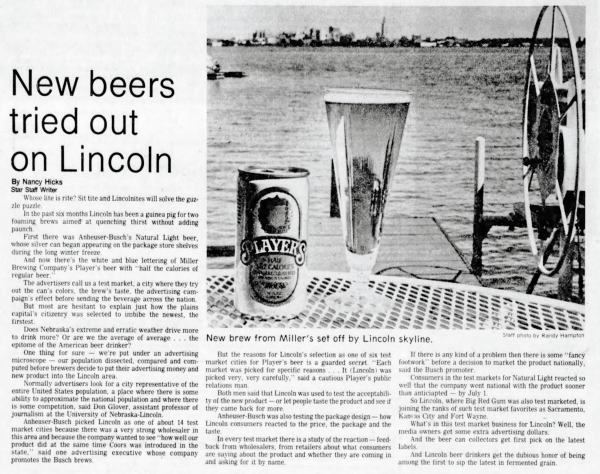 When Philip Morris originally applied for their Player’s Beer trademark in 1970, however, the idea was for the beer label to actually match their cigarettes.

In 1983, another major player at Philip Morris (coincidentally named “Lincoln”) wrote a letter proposing “an idea” for a Player’s beer label that “would be developed graphically to harmonize with Player’s cigarettes.” (In other words: the same idea that the company had in 1970 when it first applied for the Player’s Beer trademark.) 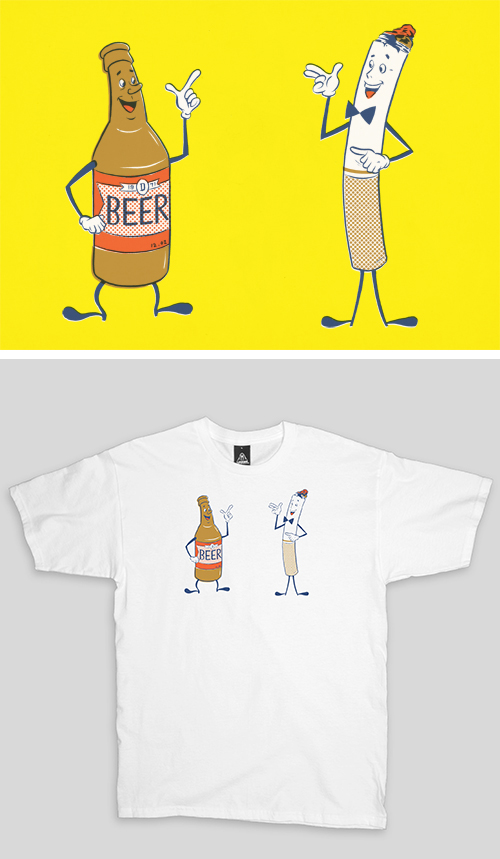 Morning Breath, Inc. created the anthropomorphic illustration on the right. They included it in their 2006 book, The Early Bird. (They also used the same illustration for a “Beer and Cigarette” T-shirt for sale at Upper Playground for $26.)

Of course, big tobacco did not draw as whimsical a connection between the two products.

They conducted studies measuring the effects of alcohol and nicotine when consumed together. They also studied consumer consumption of beer and cigarettes.

Reinforcement of Smoking and Drinking: Tobacco Marketing Strategies Linked With Alcohol in the United States

Beer and cigarettes are connected in another way, as well. Both are heavily regulated products subject to excise taxes.

Such “sin taxes” have a dual purpose. On the one hand, they’re supposed to discourage harmful behaviors. On the other hand, they are simply a way for government to raise money.

We estimates the lifetime discounted costs that smokers and drinkers impose on others through collectively financed health insurance, pensions, disability insurance, group life insurance; fires; motor vehicle accidents; and the criminal justice system. … On balance, smokers probably pay their way at the current level of excise tax on cigarettes; raising those taxes, however, could reduce the number of adolescent smokers. In contrast, drinkers do not pay their way: current excise taxes on alcohol cover only about half the costs imposed on others.

The Taxes of Sin: Do Smokers and Drinkers Pay Their Way?