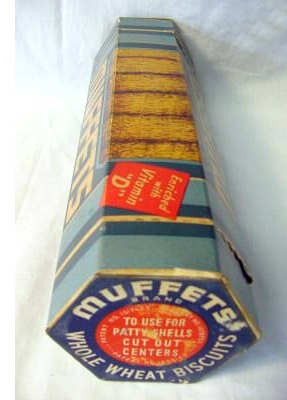 In addition to the cereal cup shown at the end of last Thursday’s post, another food that Scott H. Perky (son of Shredded Wheat inventor, Henry D. Perky) invented was “Muffets: The Round Shredded Wheat.” (AKA: “The All-Year-Round Cereal”)

I was twelve when shredded wheat was born, and worked and played in father’s laboratory. I grew up under the influence of his enthusiasms, worked in every department of his factory, made some inventions of my own, and in 1920 invented Muffets. Now I am, myself, conservatively but with great hopes, introducing what I consider the first new departure since my father’s in the line of popular “cereals.”

Just as Henry Perky’s Shredded Wheat Company was eventually bought out by Nabisco, so too was son, Scott Perky’s Muffets Brand bought out by Quaker Oats.

This 1930s hexagonal box (via Worthpoint) must be one of the earliest versions of the Quaker Oats Muffets box. A package design with a number interesting features:

a. It’s a close-packing hexagonal prism.

b. It has a faux die-cut window revealing a trompe l’oeil illustration of the product contained within.

c. The biscuits illustration also serves as an orthographic diagram of the package contents (albeit from just one angle).

d. At one end of the box there is a seal-of-approval type graphic burst, guaranteeing that “if you do not agree that these are the best whole wheat biscuits you have ever used we shall gladly remit the cost of this package.”

e. On the bottom panel (not pictured here) the ingredients are listed: “Whole Wheat, Irradiated Dry Yeast. Each Biscuit provides 50% of the Minimum Daily Requirement of Vitamin D”

In 1923, Harry Steenbock and James Cockwell discovered exposure to ultraviolet light increased the Vitamin D concentration in food. After discovering that irradiated rat food cured the rats of rickets, Steenbock sought a patent. Steenbock then assigned the patent to the newly established Wisconsin Alumni Research Foundation. WARF then licensed the technology to Quaker Oats for use in their breakfast cereals.

from Wikipedia’s entry on the Wisconsin Alumni Research Foundation

According to Wikipedia, “Irradiated food does not become radioactive, but in some cases there may be subtle chemical changes…”

At the other end of the box is a serving tip about how you can cut out the centers to use the biscuits as “patty shells.” Nowhere on the package do the words “breakfast” or “cereal” appear.

(Some later versions of Quaker Oats Muffets packaging, after the fold…) 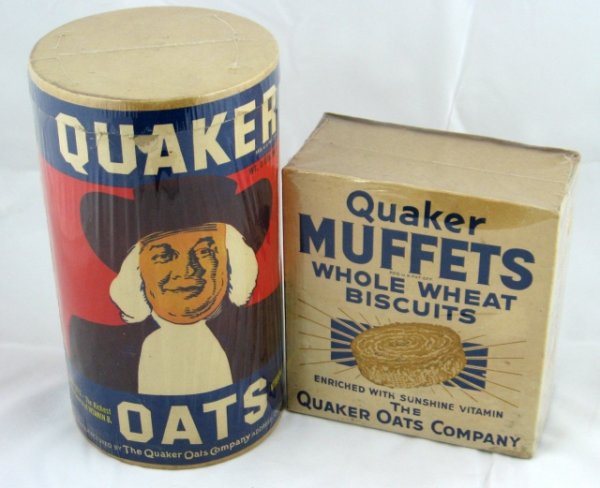 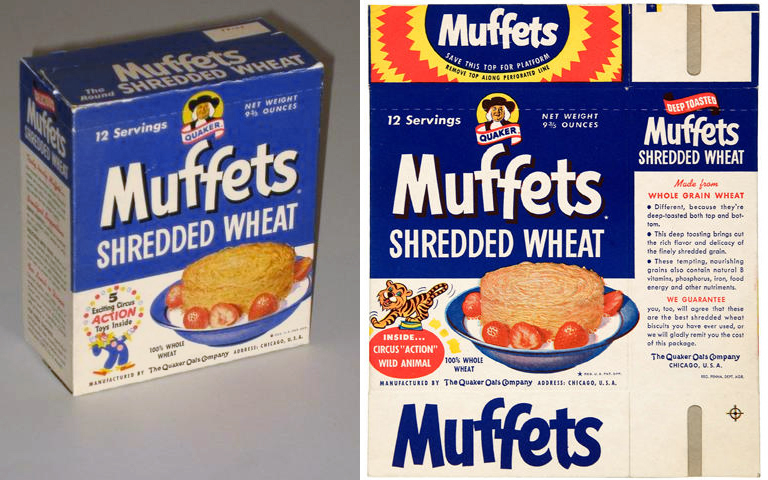