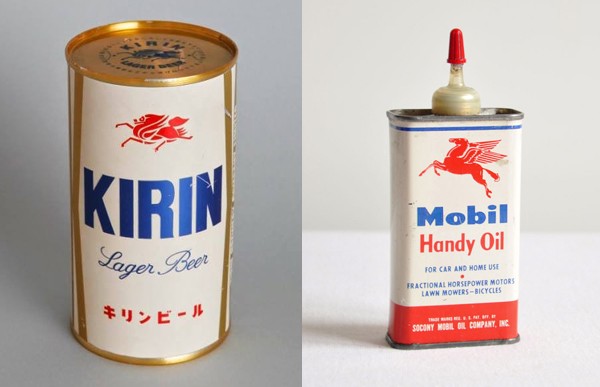 Last month, while researching cans of Japanese beer (that were designed to resemble glasses of beer) I happened to see a rather minimal beer can design for Kirin.

I was reminded of an earlier can design for Mobil oil. Both feature white backgrounds with blue, sans-serif type and red, mythical creatures as logos.

More about each of these mythological logos, after the fold… 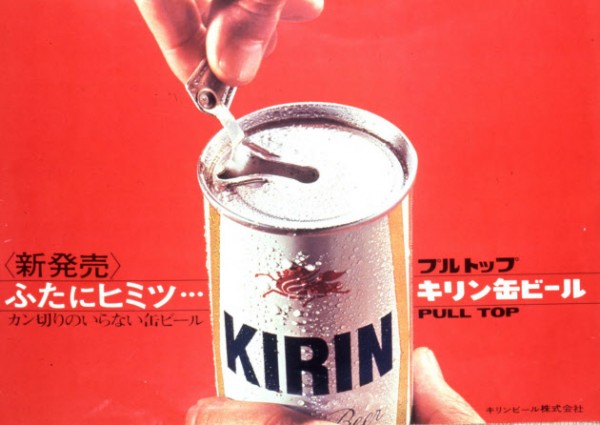 1. The Kirin is actually the older of the two logos. The red, simplified form of the Kirin logo, however, appears to have been designed sometime in the late 1950s—early 1960s. 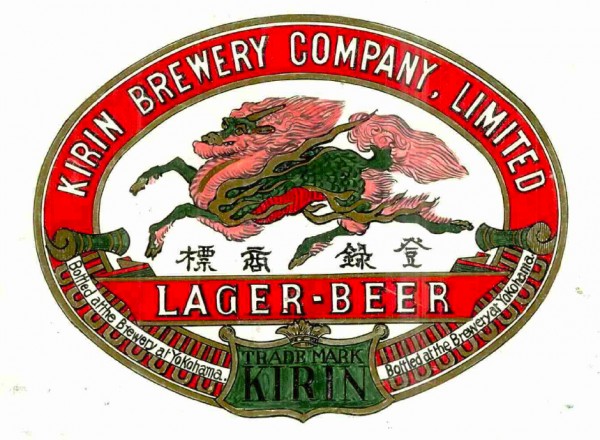 The kirin depicted on Kirin Beer labels is a legendary creature derived from ancient Chinese myths and is said to be a harbinger of good luck. A Chinese legend says that when Confucius, the founder of Confucianism, was born in 6th century B.C., a kirin appeared before the eyes of his mother. When Kirin Beer first came out in 1888, beers imported to Japan had labels that featured animals such as cats and goats. Japan Brewery Co., Ltd.—the forerunner of Kirin Brewery—chose also to use an animal as the central theme for its beer label.

A close-up of Kirin Beer labels from 1933 to the present day reveals that the three tiny Japanese kana letters for “ki,” “ri” and “n” are embedded in the mane of the kirin depicted in these labels. We do not know exactly why this started: Some say the graphic designer who created the original 1933 label may have simply added an amusing touch to the design, while others claim it was an attempt to prevent forgery of the labels.

The Story Behind Kirin Beer Labels 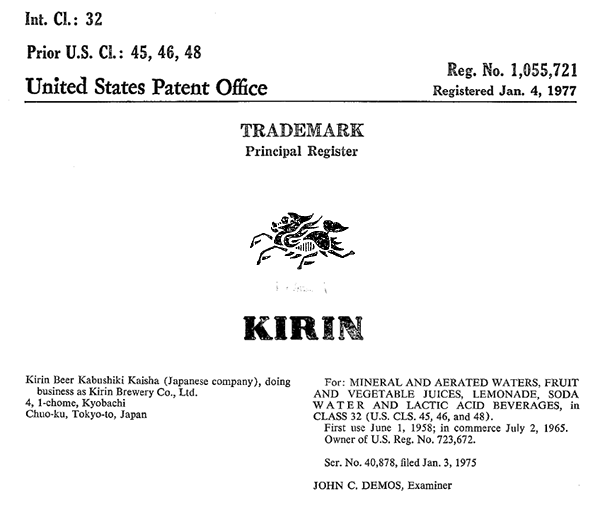 Can’t figure out who designed the simplified logo, but trademark documents for a similar simplified version of the mark (for non-alcoholic beverages) indicates 1965 as the first use. This is also the year that the Kirin beer can was released with a pull tab top, an idea so new that the company felt they needed to include instructions on the bottom of the can… 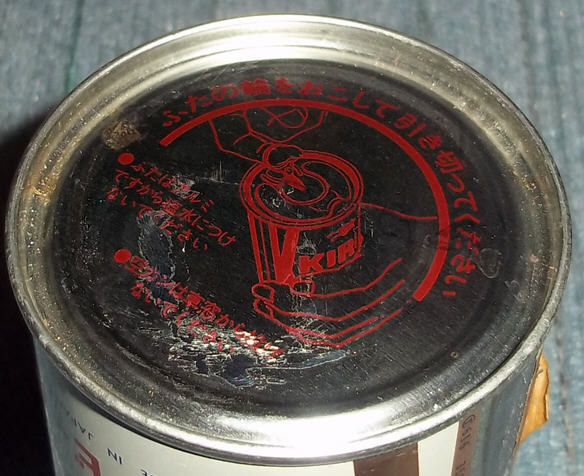 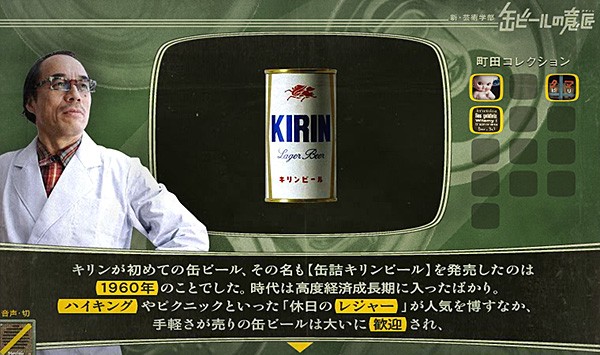 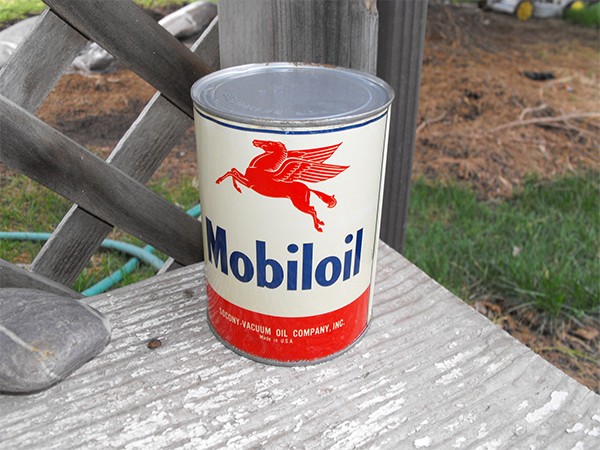 After Standard Oil was ruled an illegal monopoly in 1911 and ordered to break into smaller companies, some of its successors, including the Standard Oil Company of New York (or SOCONY), continued to export oil to South Korea. SOCONY retained the “Victory” trademark and also introduced the Pegasus symbol, which suggested imagination, power, and speed. The flying horse was first colored red by an artist at the Mobil Sekiyu division in Japan…

Oil Signs from South Korea at the Dawn of the Modern Era
Charles B. Wang Center, Stony Brook university 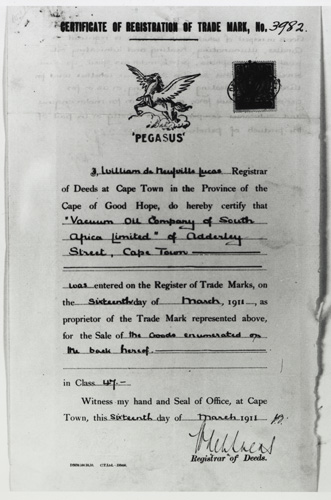 The earliest version of the Pegasus trademark was registered in 1911 by the Vacuum Oil Company of South Africa Limited.

A simplified version was created by Robert Elmer Lougheed.

During the ’30s, renowned cowboy artist Robert Elmer took the original horse… and restylized it into the highly recognizable logo we know today as the “Flying Red Horse.”

In 1966 Chermayeff & Geismar simplified the Pegasus mark even more, and flopped it so that the red flying horse’s future flight path would always be from left to right. 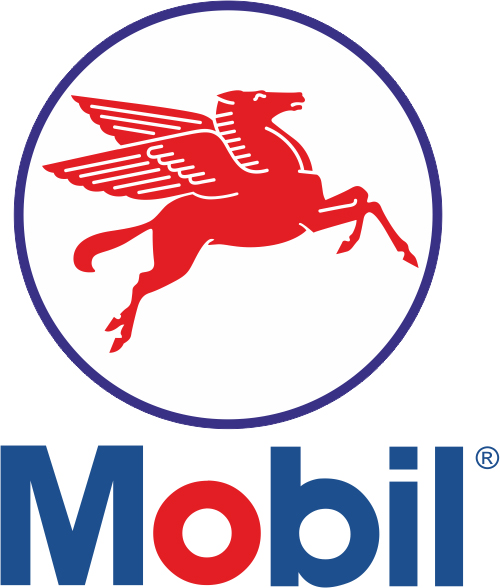 To commemorate its ‘100th anniversary, the Socony Mobil Oil Company changes its name. The word “Socony” is removed, and goes on to be known as just “Mobil”. A new logo is introduced, created by Chermayeff & Geismar, a graphic design company in New York. The name “Mobil” written in blue gains a red “o”, and the Pegasus symbol is separated, and begins flying to the right side.