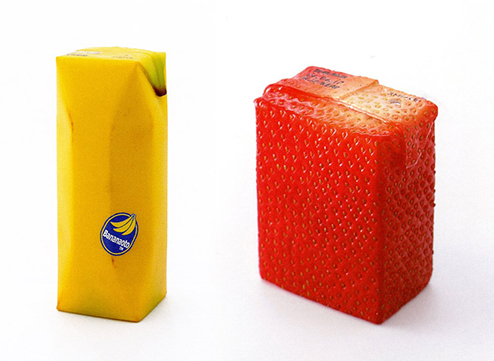 If you’re like me, then you’ve probably already seen these 2004 images of the Naoto Fukasawa JUICEPEEL packaging (above) when they were appearing on various blogs in 2009.

Also known as “Juice Skin,” what I remembered reading about the project at that time, was that the packages were not only colored, but also textured to resemble specific fruits.

That’s true enough, but there’s a bit more to tell, and since we’ve been looking at Tetra Pak juice boxes lately, maybe now’s a good time for a second look. 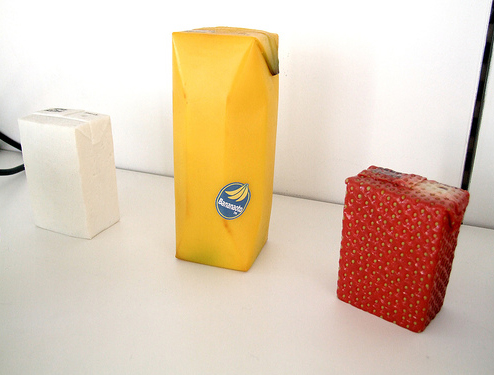 Some of the things that I hadn’t fully understood (or remembered correctly) about this project:

1. The packages were originally created for the Haptic exhibition, a design show sponsored for the 2004 Takeo Paper Show:

Developed for the Haptic exhibition held in Tokyo in 2004, Juice Skin consists of juice boxes that appear to be wrapped in the actual skins of the fruit whose juice they contain. When first seen, the effect of the juice boxes is immediate: audiences quickly comprehend both the contents of the objects as well as the pun Fukasawa is making, since the use of actual fruit skin would be unworkable for this application. Borrowing the precise Japanese craft of simulation developed to make fake plastic food for restaurant displays, Fukasawa creates vividly realistic surfaces that conform to the improbable geometry of disposable beverage container.

The “improbable geometry” of juice-box shaped fruits is a big part of what makes these packages so intriguing. We’re surprised by “substantially square” products that are not ordinarily rectangular. (e.g.: eggs, cigarettes, toilet paper, etc.)

2. As highlighted above, the fact that these were all simulated plastic “sampuru” was a revelation to me. The same medium is also used to manufacture plastic “play food.” 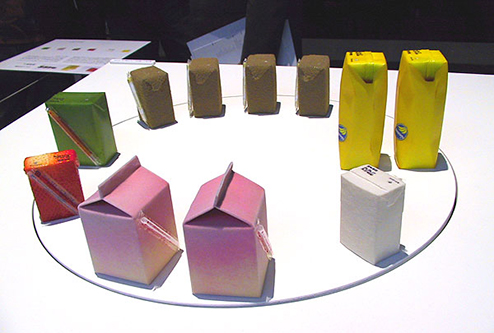 3. There were more fruits involved than the frequently photographed, banana juice, strawberry and kiwi fruit juice boxes.  Fukasawa had also created containers for soy milk, green apple and peach juice, as shown on the (apparently rotating) display above. 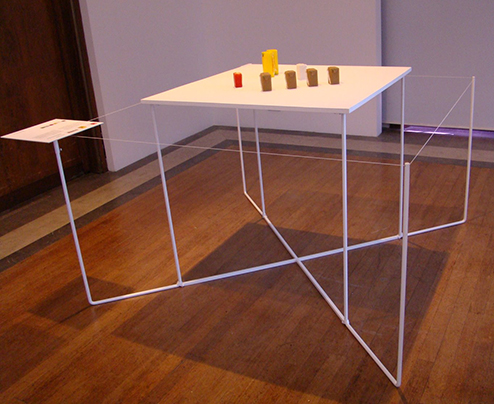 Another installation of Fukasawa’s “Haptic” juice packaging (photo from lansdscapeiszane) 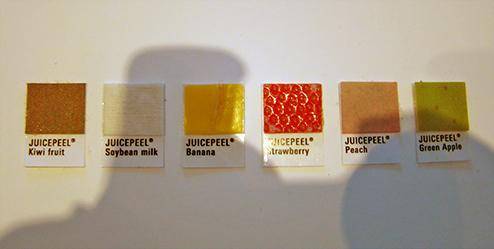 4. Fukasawa had also exhibited Pantone-style swatches (above) showing the colors and textures of each of the six proposed “Juicepeel” packaging surfaces. 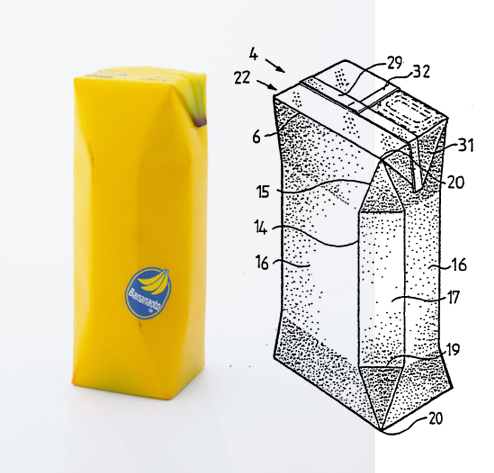 5. Fukasawa had used a number of different Tetra Pak containers to contain his six proposed flavors, including Tetra Prisma packaging for the banana beverage (shown above), the familiar gable top cartons for peach juice and Tetra Brik juice boxes for the other 4 flavors.

When thinking of objects where there’s a marked contact with paper, what leapt to mind was a paper drink pack. That slight weightiness, the chill and the beads of water on the surface, and the sense of holding a liquid form a set, together with the flavour of the drink. The skin of a fruit is also part of a set, with the juice, the flavour contained within that skin, and the feel of it. I believed that a design that imparted the idea that the taste could be received tactilely would fit in with the exhibition’s theme. Amongst the typical shapes of tetra paks was an octagonal one, and since the configuration of the obtuse faces overlapped with the image of the obtuse surface of a banana, I designed a receptacle for banana-flavoured milk. Things developed from there, and I also designed paks for soymilk, kiwifruit juice, peach juice and strawberry juice. The soymilk pak’s surface was given a texture like that of firm tofu. With the kiwifruit and peach-juice paks, fuzz like that found on the skin of each fruit was applied. The strawberry juice pak had small seeds embedded in its surface. They all turned out rather strange-looking, but a lot of interesting discoveries were made along the way. We understood that the feel of things we touch unconsciously on a daily basis is committed to memory along with that thing’s taste and smell; by awakening in an over-the-top way those senses of which we’re unaware, it was possible to create a mischievous design. With these paks, which are a bit off-putting to look at, if the juice inside tastes good, then they’ll be designs that you won’t be able to forget, that you won’t be able to let go. Looking only at the shape of a fruit, you can’t always say that that fruit looks good. Sometimes it can look off-putting too.

(One more realization, after the fold…) 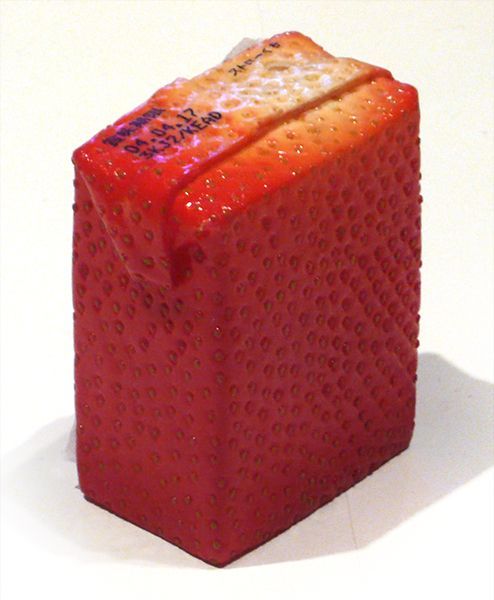 6. While the substantially-square, seed-textured strawberry package above, is probably the most glamorous of the six containers, it was not the one that was actually produced… 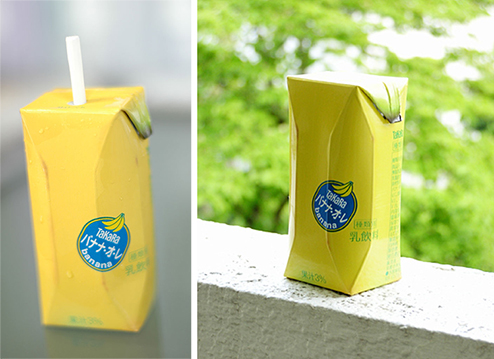 Photo on left from TaKaRa’s 2005 press release; on right: 2005 photo in store from: automeal

The one that eventually came to market for a time was the banana. Used for TaKaRa’s バナナ・オ・レ (Banana au-lait), the container is very much as Fukasawa had originally envisioned it. Except that instead of a “Bananaoto” sticker, TaKaRa’s alternating upper-case/lower-case trademark appears. And there is no banana “juicepeel” texture.

Based on the limited number of photos of the product in this package, I’m guessing that it was discontinued at some point.